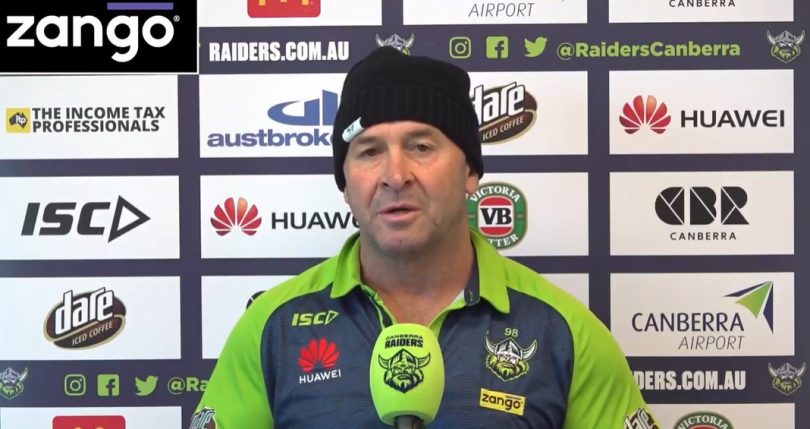 It was a tough weekend for the Canberra Raiders who were on the receiving end of one of the most spirited displays in recent memory. They lost 14-6 in Campbelltown against the Manly Sea Eagles and were bruised and battered for their efforts.

Manly focussed its attack on the Raiders’ right-edge and Manly fullback Tom Trbojevic took full advantage of the Raider’s vulnerabilities with the first try of the game followed by a try assist before hobbling off in the second period with a hamstring injury.

That will no doubt send shivers through the Manly squad (and Blues fans), especially as coach Des Hasler has had to deal with a raft of injuries leading up to the fixture before losing two players in the early stages of the game.

For their part, the Raiders seemed to be playing without any real plan over the 80 minutes.

Not so long ago I dubbed them early premiership favourites, but recent performances are making me doubt my optimism.

It looked like Ricky Stuart’s men were really pushing towards tiring out the Sea Eagles, but Manly never gave in and the extent of their effort was clear when player after player succumbed to cramps.

The Raiders looked clueless and uninventive going forward. However, the Green Machine also had two on-field try decisions go against them in the second half on Jarrod Croker and Jordan Rapana efforts which stung their morale.

You felt like the Raiders were missing the directness Jack Wighton displayed the week prior against the West Tigers. Halves partner George Williams did not have the impact he would have been hoping for during the game and the visitors did a fantastic job nullifying the Englishman.

None of this should take away from the courage Manly showed in the face of adversity.

The Raiders should be concerned about their right-side defence and though they showed no signs of weakness in their first three games, it is an area Stuart will need to focus on over the next few weeks because you can be sure the coaches he’ll be facing have noticed the brittle edge. Don’t be surprised if there are changes.

It will be important for the Canberrans to reset and focus their attention on NRL competition leaders Paramatta. The Eels boast an impressive 5-1 record in 2020.

Patrick Barrett - 28 minutes ago
Dylan your fault View
Sonia Irwin - 5 hours ago
Been watching this as a client. Gotta say a bit nervous is an understatement View
Justin Newbury - 5 hours ago
Whoopsie. View
News 15