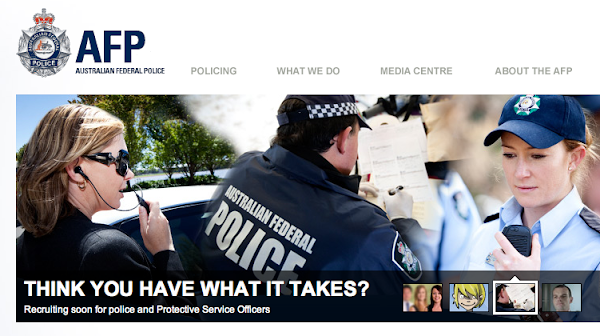 The ABC has the good news that long overdue integrity testing is coming for AFP, Crime Commission and Customs officers:

Under the plan, Australian Federal Police, Crime Commission and Customs officers could be offered fake bribes, or confronted with valuable items planted in suspicious shipping containers or crime scenes to tempt them.

The so-called ‘integrity tests’ would target officers suspected of corruption.

“It will be controversial, these are tough new powers, but there’s no place for corruption in our law enforcement agencies and where it exists I am determined to weed it out,” Home Affairs Minister Jason Clare said.

The union is, of course, agin’ it.

“There is no place for corruption in our public service,” Mr Clare said.

“It is a fact that law enforcement officers are targeted by criminals because of the nature of their work.

“The power of integrity testing is that it puts fear in the mind of people thinking of acting corruptly.

“They will need to think twice before accepting a bribe from a criminal because that criminal could be an undercover police officer.”

The Integrity Commissioner or the head of the agency will be responsible for authorising integrity tests.

The Integrity Commissioner will have overall oversight of the integrity testing system and will be made aware of all integrity tests being undertaken by agencies.

Oversight will be provided by the Commonwealth Ombudsman and the Parliamentary Joint Committee on the Australian Commission for Law Enforcement Integrity.

Employee representatives are also being consulted on the development of the system to ensure appropriate safeguards are in place.

The problem is the old “Quis custodiet ipsos custodes?”. And this proposal makes the problem worse.

So the powers that be suspect Customs Officer A, so they lay a trap for him (it’ll probably be a him). How can we be sure that the “tempting item” is not stolen by someone else, or it was just said that it was there? And so when Officer A opens the box, and its not there, that “proves” that he’s a bad person? Who are the witnesses, and who was watching the box to prove it wasn’t tampered with?

I suspect that proving that an officer is corrupt is difficult, and this is a simple “gotcha” that cuts through the paperwork. Or they think it will.

Although its an extreme example (or at least I hope so) giving the watchmen these powers will ensure that they’re abused – cf http://www.dailymail.co.uk/news/article-1092264/New-target-anti-terror-spies-Village-paperboys–having-correct-paperwork.html

They should recruit civilians to get involved in the operations. I’d be first in line.

Be interesting to see how Justice Higgins goes along with this. He’s slung out earlier cases where he reckons the cops used ‘ entrapment’ or a sting ( or whatever it’s called )..

retep - 6 hours ago
*sourced. Geez it's a rough day.... View
retep - 6 hours ago
Applause. Thanks for your efforts. We too try to alleviate our energy use in similar ways. Also agree with your observations... View
HiddenDragon - 7 hours ago
Canberrans (particularly those without the income of a professor or an MLA) who are still absorbing the recent news about a b... View
News 4

assiduous - 7 hours ago
A scheme like this is akin to rearranging the deck chairs on the titanic, as opposed to meaningful reforms, planning and infr... View
Ann-Maree Jacobs - 8 hours ago
Four tries every time The site is down ! View
Community 4

ChrisinTurner - 13 hours ago
I had to look up stealthing on Google. Seems to have changed the whole intent of the word "stealth". The mind boggles with th... View
show more show less
*Results are based on activity within last 7 days