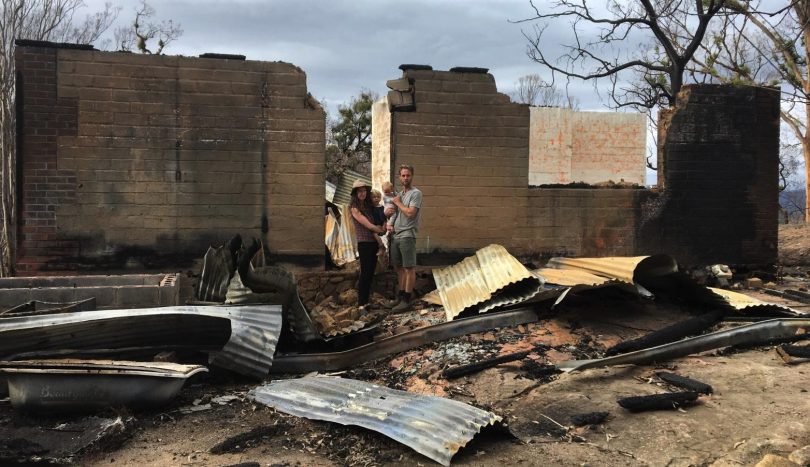 Felicie Vachon and her family stand among the remains of their home in Yowrie in the Bega Valley. Photo: Kyra Miles.

More than four months since the first seasonal bushfires hit the NSW Far South Coast, government-funded local contractors were hired to begin clearing burnt buildings and infrastructure from about 350 properties in the Bega Valley and Eurobodalla regions last week.

For those affected by the fires, it’s been a long, uncertain wait.

“We have all been waiting for this amazing free service,” says Felicie Vachon from Yowrie, northwest of Cobargo in the Bega Valley, whose family home was destroyed on New Year’s Eve.

She says that if she was to use insurance money – which was only approved this week – more than half of her family’s funds would go towards clean-up of the damaged property.

International engineering firm Laing O’Rourke is overseeing the free government bushfire clean-up in NSW and says it is focused on getting the job done as quickly and safely as possible. Local contractors have been hired to do the work where possible.

“We understand how important this project is for regional communities in helping them take the first steps towards recovery, as well as supporting the local economy,” says a spokesperson for the firm.

So far throughout the Bega Valley and Eurobodalla shires, Laing O’Rourke has awarded 10 contracts to local businesses.

Felicie hopes contractors understand the sensitivity of the work they are embarking on.

“This is not just another project,” she says. “Yes, it’s metal and melted plastic that needs to be removed, but it’s also my kids’ teddy bears in there. There are big emotions in that rubble.”

In nearby Verona, Lindy Marshall had the clean-up crew at her place this week and says they packed up her life in two trips – about six hours – and did a “marvellous job”.

She says it’s hard for people to comprehend how traumatic it is to look at black rubble every day, thus making the clean-up a hugely important step towards recovery.

“When they were taking my stuff away, it was pretty depressing,” says Lindy. “It’s not just your washing machine that’s gone, it’s photos of friends who have passed away and every memento of your child’s life.”

With the clean-up complete, Lindy can move forward with her plans to build a small kit home on her land.

Lindy says the government gave bushfire victims just two things: “A thousand dollars and this promise to clean up.”

Although she’s grateful to have the clean-up finally done, it’s insufficient help for people such as her who are still living in temporary accommodation.

Felicie and her partner have two children aged under four. They have been displaced since the bushfire, but can finally settle after signing a 12-month rental lease.

“We are still in crisis, but there’s less smoke now,” she says. “But it has felt endless… and we are the lucky ones. Some people are still living in tents.”

Returning to the burnt bush and remains of their home has been so emotional that Felicie and her family weren’t sure if they wanted to rebuild on the site.

A friend of a friend who lost his home in the 2009 Black Saturday bushfires in Victoria, came to Yowrie to visit soon after the tragedy, and Felcie says her conversation with him is what gets her through.

“He looked around at the burnt bush and said, ‘You have such a beautiful spot here.’ He could see it for what it will be again. He told us the first year is the worst.”

Felicie adds that when you don’t know what to do or how to live after a traumatic event, you look for any sign of forward movement to stay positive.

“We cling to any bit of help,” she says. “We are like magnets for hope.”

The next few months will be busy for Laing O’Rourke, with the Bega Valley Shire Council confirming there will be an intense eight weeks of clean up.

“Until the site is cleared, we can’t do anything towards building, not even take measurements,” says Felicie. “I hope they come soon.”

HiddenDragon - 43 minutes ago
This is petty-minded vandalism of the national heritage. If the recent federal Budget had proclaimed that fiscal repair was t... View
Ol L - 3 hours ago
Can a government department go bankrupt? View
News 52

MERC600 - 1 hour ago
Quangers has it all over Canberra these days. No graffiti , grass mowed and no rubbish floating about. The other article on t... View
Sarah Winders - 2 hours ago
Lorraine Neville what do you all call it? View
News 19

chewy14 - 2 hours ago
JS9, I agree and it's this sort of rent seeking that does a disservice to what they are trying to achieve. It's actually also... View
jwinston - 3 hours ago
I agree with you Chewy - climate change is a thing. What I don’t agree with is that man made climate change is a thing.... View
Capital Retro - 5 hours ago
Flannery is the Chief Councillor at the Climate Council. I think you could fairly say he represents a position. View
Motoring 37

Shay Daisy - 3 hours ago
Absolutely love Altina drinks! Such a delicious alternative to alcohol and no sugar. Delivery in canberra is also a massive b... View
Opinion 3

Nick Swain - 4 hours ago
The Melbourne and Sydney buildings are very special. They were the first shops in Civic and are beautifully designed giving t... View
ChrisinTurner - 5 hours ago
Imagine the improvements that could be made if the government gave up spending $billions on replacing a few buses with trams.... View
show more show less
*Results are based on activity within last 7 days

A line of thunderstorms stretching from Parkes to the Victorian border will impact the ACT and surrounding regions during the...
Community 43

When did the word 'consultation' become the beginning and end of a genuine voice from the community on major policy...
Community 43

@The_RiotACT @The_RiotACT
Critics say a 10-year funding crisis is coming to a head at the National Archives. An open letter to the Prime Minister pleads for help to save irreplaceable national assets https://t.co/IOZh6De8k4 (28 minutes ago)

@The_RiotACT @The_RiotACT
On any given night, nearly 500 young people are couch surfing or living on the streets in Canberra. For less than $500, you can help @raw_yp give one at-risk kid a brighter future https://t.co/cF7hvOsFxr (4 hours ago)