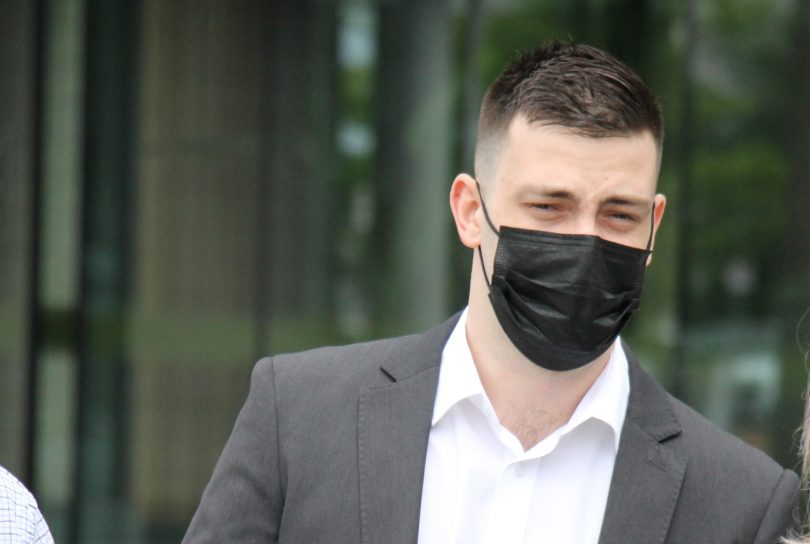 Jake Tony Walden was “really drunk” when he cycled to his local pharmacy and robbed it not once but twice, using knives to threaten staff until they handed over drugs.

“To choose one’s local pharmacy … when one might be recognised by someone who served you before hardly suggests forethought,” he said.

He said the first robbery took place on the night of 1 August 2020 when Walden went into the pharmacy at Amaroo, which his whole family used as they lived nearby, with no facial covering so his face was visible to staff, customers and security cameras.

Walden pulled out a folding knife with a 10 cm blade and threatened to stab two staff members while demanding oxycodone and Valium.

He was given drugs and left, apologising before he did so.

A week later, on 7 August, he returned to the pharmacy during the day, this time wearing a mask which Justice Refshauge said he could infer was due to the government’s response to the COVID-19 pandemic rather than an attempt to disguise himself.

Walden drew what appeared to be a hunting knife, which “certainly looked fierce”, Justice Refshauge said, and again demanded oxycodone and Valium from staff.

“Don’t be a hero if you don’t want a hole,” he said. He was again given drugs.

Walden pleaded guilty to aggravated robbery and spent 118 days in custody until he was granted bail.

Justice Refshauge said Walden used to work as a concreter but hadn’t worked since 2016, after which he had received welfare payments.

He said Walden used to drink up to two litres of wine each day and had said he was “really drunk” when he committed the robberies. He also used to use drugs like heroin and methamphetamine.

Justice Refshauge did say he had shown insight and regret.

Walden was sentenced to three years and 11 months’ jail, with the remainder suspended from Tuesday for him to complete a two-year Drug and Alcohol Treatment Order.

Once the treatment order finishes, he must serve the remainder of his sentence as a good behaviour order.

Andrew Early - 11 minutes ago
Elaine Staples no Elaine…. Worst tree EVER. View
Lucy Doan - 14 minutes ago
Funny thing is that the planners never plant in their areas such as inner south or inner North, they plant these trees in poo... View
Steven Miller - 38 minutes ago
Lorraine Burford well that’s all an option! 🤣 View
Food & Wine 9

Vicky Myors - 12 minutes ago
So cute how you had chickens in the back if your ute View
Vicky Myors - 16 minutes ago
Paul I watched your show tonight for the first time .Very impressed you do a fab cook up . keep up the good work.I will be wa... View
News 45

Diane Tait - 21 minutes ago
Sue Danaher we have had this system for 7 years since we moved to Lake Macquarie. At this time of year we could do with two g... View
kenbehrens - 36 minutes ago
Those government claims also assigned a dollar value to the 30% food waste. When I calculated back the "average" weekly food... View
TimboinOz - 4 hours ago
We have two large grey-black recycled-plastic worm farms. Much less work than composting, no turning, effectively zero smells... View
Sport 2

Hillbilly - 25 minutes ago
Both firmly in the pantheon of the greats and both made huge contributions to Canberra. Best wishes to them. View
Community 96

Mick Brennan - 28 minutes ago
Kris Peralta diff events View
Katarina Vucic - 29 minutes ago
Just let people who enjoy to have it simple stop making world too safe let some steam out View
Scott Norman - 32 minutes ago
Toni Isaacson who is us? View
Lifestyle 7

thea - 41 minutes ago
We want more of Geoff’s work in ACT please! View
Rebecca Mosher - 2 hours ago
Such an amazing artist View
Lifestyle 30

@the_riotact @The_RiotACT
The @acccgovau is investigating reports of #rapidantigentests being sold for "outrageous" prices. But #Canberra pharmacies say their big concern remains supply and they welcome the scrutiny https://t.co/OLkQPnSfWa (43 minutes ago)