Labor set to object to redrawing of ACT electoral boundaries 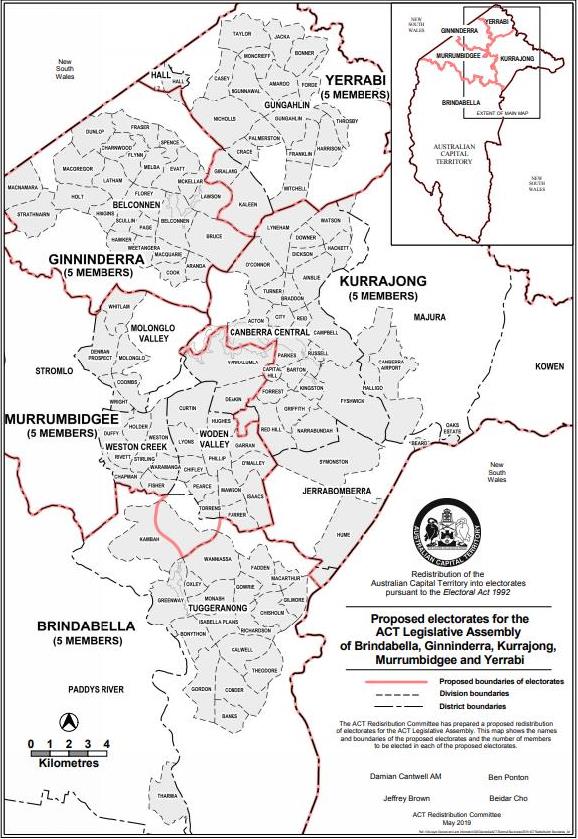 The Labor Party is expected to lodge an objection to the electoral boundaries proposed by Elections ACT for the 2020 ACT Legislative Assembly election, in a redistribution that appears to favour the Canberra Liberals.

Labor will focus particularly on the reallocation of wealthy inner south suburbs Yarralumla and Deakin to the Woden and Weston Creek based electorate of Murrumbidgee.

ACT Labor secretary Matt Byrne said residents of Yarralumla and Deakin would not receive effective representation being part of an electorate which is predominantly focused on Woden, Weston Creek and the Molonglo Valley and separated from their shared community of interest with the rest of the inner south.

“We believe that there is sufficient flexibility in the legislation to ensure that communities of interest such as those in the inner south can be represented within the same electoral division,” Mr Byrne said. “We understand that the Redistribution Committee is keeping an eye on the future growth of the ACT and is trying to accommodate that growth within electoral boundaries, however we don’t believe that this is sufficient reason for such a major change at this time.”

Elections ACT has not made any changes to the names of the five electorates – Brindabella, Ginninderra, Kurrajong, Murrumbidgee and Yerrabi.

Electoral Commissioner Damian Cantwell said enrolment in each electorate must be within +/- 5% of the determined quota at the time of the next election.

“This requirement is aimed at ensuring ‘one vote, one value’,” Mr Cantwell said. “The quota is 1/5 of the ACT total enrolment. Each of the proposed electorates meets this requirement.”

The move of Yarralumla and Deakin from the central electorate of Kurrajong to Murrumbidgee was necessitated by the unprecedented decision to split the large southern suburb of Kambah east and west down Drakeford Drive.

Kambah East goes to Murrumbidgee, while the rest of Kambah goes to Tuggeranong-based Brindabella.

The Canberra Liberals should be happy after arguing in its submission to the redistribution committee for Deakin to join Murrumbidgee, while Labor reluctantly opted for Red Hill to go to that electorate, questioning the practicality of moving a single suburb into an electorate with little common interest.

The committee agreed unanimously that Yarralumla and Deakin both hold a strong connection with the Woden Valley through transport links via Adelaide Avenue and Yarra Glen; and economic and social links via the Woden Town Centre, their main shopping hub.

It argues that these links are stronger than those held by the residents of Red Hill and the option of including Hume, Jerrabomberra district, Symonston, Narrabundah, Oaks Estate and Beard within Brindabella.

President of the Canberra Liberals John Cziesla said the inclusion of Deakin and Yarralumla in the Murrumbidgee electorate was a logical outcome given the key redistribution requirement that each electorate be within +/- 5% of the quota at the time of the next election.

“The inclusion of Yarralumla along with Deakin will create a distinct and strong inner south community of interest within the Murrumbidgee electorate,” he said.

But the Deakin Residents Association is upset after arguing that the suburbs have a strong community of interest with the inner south and should remain in Kurrajong.

Both the main parties believed Kambah East should be in Brindabella, but the committee, while agreeing the Kambah needed to be split, went the other way.

“The Committee unanimously held the view that splitting Kambah east/west down Drakeford Drive was the most appropriate solution for addressing the quota requirements of Brindabella,” the committee’s report says.

It argues that Kambah West is the most appropriate segment of Kambah to be included in Brindabella, being closer to the Tuggeranong Town Centre within Greenway. “Kambah East has a greater proportion geographically closer to the other suburbs within Murrumbidgee, with strong communication links with Weston Creek and Woden Valley via Drakeford Drive/Tuggeranong Parkway and Athllon Drive,” the report says.

Mr Cziesla said the splitting of Kambah between two electorates was unfortunate, but population growth in Woden and the Molonglo Valley will likely see all of Kambah included in the Brindabella electorate in a future redistribution.

In the north, McKellar, Lawson and Evatt have been reallocated to Belconnen-based Ginninderra, with Kaleen and Giralang remaining in the Gungahlin-based Yerrabi.

Both Labor and the Liberals had argued for Evatt, McKellar and Belconnen District 2 to be added to Ginninderra.

Reallocating either Giralang or Kaleen in conjunction with the other suburbs would take Ginninderra over quota, it says.

Mr Cziesla said the proposal to include Evatt and McKellar in the electorate of Ginninderra reflected those suburbs’ strong connection with the Belconnen area.

Well, Oaks Estate has never received ANY representation from Barr or Stephen-Smith in Kurrajong. Neither of them (a) come out here and (b) ever lifted a finger to improve the staggering levels of disadvantage here. 54% public housing, +50% unemployment, no ACTION bus, crime rates 10 to 500 times higher than elsewhere.

Byrne’s comment doesn’t stack up with his professed concerns for effective representation.

Should be “Labor set to object to unstacking of electoral boundaries”.

When I played around with the spreadsheet Elections ACT made available on their site, the best solution that met the legislative requirements regarding current and projected population that I came up with was to have both Yarralumla and Deakin join Murrumbidgee. Moving both suburbs is also better than just one as it makes it a more significant subset of the electorate and thus less likely to be overlooked by MLAs. Their transport links to Woden are also much stronger than Red Hills as was pointed out. I sympathise with the community council desire to keep the inner south in the same electorate, but it just doesn’t work with the requirement to have 5 electorates with equal numbers of MLAs in each. If Labor is so concerned about this, maybe they should have had policies in place years ago to stop the population drain from Tuggeranong. It’s also not all good for the Liberals. Adding half of Kambah back into Brindabella makes it harder for them to keep 3 seats there and losing 2 suburbs with high Liberal votes from Kurrajong will drop their vote there when at the last election it was already under 2 quotas.