9 May 2021 | Lottie Twyford
Start the conversation

The inaugural Indigenous round for the Gungahlin Bulls rugby league club will be a particularly poignant moment for one of the club’s players, Ngunnawal man Richard Allan Jr, who was tasked with the design of the team’s jersey to mark the occasion.

“It’s going to be quite incredible to run out onto the field in the jersey I’ve designed, and to see all the team and my kids sporting one, too,” he says.

The club’s Indigenous round will be held on Saturday, 22 May, and will be opened with a traditional smoking ceremony and a Welcome to Country from Richard Jr’s nan, Violet Sheridan, who is a Ngunnawal elder.

It’s the first time Richard Jr has undertaken a design through a digital medium, and every artistic choice was highly symbolic.

“I took a personal approach to the design,” he says. “Each different point and place in my life is represented by a white circle. It’s like my own timeline.”

Featured on the jersey is Mullyan, the Ngunnawal totem animal that watches over and protects its people. Richard Jr wants this to be universally understood.

“I put Mullyan, the eagle, at the top of the timeline so other people can imagine it as whoever is looking out for them at a particular time, whether it’s your parents or somebody else,” he explains.

The Ngunnawal words on the back of the jersey are important to Richard Jr, too.

“Getting Ngunnawal language back out onto Ngunnawal land is really important,” he says. “I hope if people like the jersey, they might go out of their way to learn more about it.

“Even if you’re just using yhuun (‘hello, how are you?’) or yerrabi (‘goodbye’), you’re still making an effort to get culture back into where it came from.”

Richard Jr says he is inspired by his dad, Richard Allan, who also played and later coached Gungahlin Bulls. 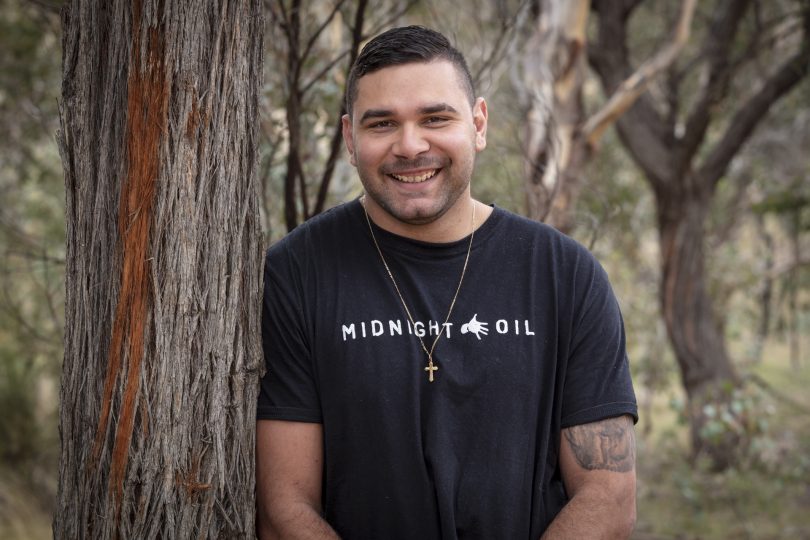 “Dad went back to uni to study teaching so he would be able to teach in traditional language,” says Richard Jr. “He now operates Indigenous tours for big businesses, where he speaks in language.

“I wasn’t big into culture until my dad took me out onto country and taught me how to throw my first boomerang.”

Richard Jr says he’s still a little rusty with his use of language, but takes every opportunity he can to say hello and goodbye.

“When I was 18 or 19, I wasn’t sure what I wanted to do so I decided to educate myself about culture,” he says.

“I then started my own business at 20, where I paint and then explain the stories and meanings behind these paintings to people.”

Richard Jr began playing rugby league for Gungahlin Bulls at the age of 11. He made the Canberra Raiders junior squads in his teens, before playing lower grades in Sydney for St George Illawarra Dragons.

Unfortunately, he got a serious concussion and wasn’t able to play footy for four years.

“The boys at the club are like a second family,” says Richard Jr. “Even on the days when I don’t feel like showing up for training, I know I can’t do it as I want to be there for them.”

With the Allan family heavily involved in the club – Richard Jr’s brother, sister and father have all played for Gungahlin Bulls – it is integral to his family history.

Originally, Richard Jr thought the club’s Indigenous round day was going to be small, but after discussions with one of the club’s key sponsors, Rubik3, he soon realised much more could be done.

“I saw how we came out to pay our respects on Anzac Day to fallen servicemen and women, and we think now that it’s possible to do the same thing for past, present and future Indigenous leaders,” he says.