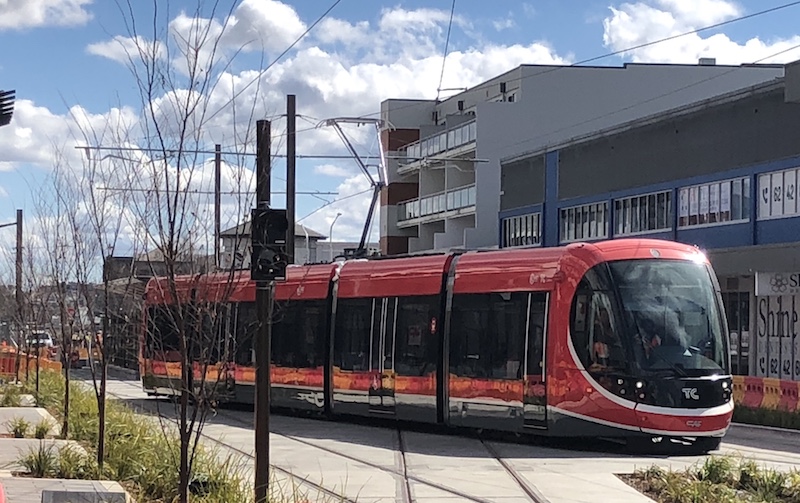 Jobs growth is slowing as light rail and other big projects near completion. File photo.

Some of the shine might be coming off the ACT economy but the national capital is still expected to show solid growth this year, according to a new report.

The latest Deloitte Access Economics Business Outlook says Canberra posted the fastest rate of growth of any State or Territory last financial year but looking ahead, ‘some of that glitter will begin to fade’ as the Stage 1 light rail project and other big construction projects near completion.

The report says job growth is slowing, led by a fall-off in construction sector employment.

“This may be a sign of things to come, as some large construction projects finish (including phase one of the Canberra light rail project), and as the positive impact of a peak in housing construction fades (especially among apartments),” it says.

While the housing pipeline remains robust, the report casts doubt over its delivery, saying there is increasing uncertainty as to how much will end up being built.

It also says that with more stock on the market, house prices moderating and further falls expected due to tighter lending requirements, higher mortgage rates and the fall-out from the Sydney and Melbourne markets, there may be less incentive to build more homes.

But with the ACT Government committing to a $100 million housing strategy to boost the level of affordable shelter in the Territory, combined with high population growth, increasing rents and falling vacancy rates, demand for housing should remain strong.

“On balance, Deloitte Access Economics forecasts housing construction activity to hold at its current high level as the existing pipeline works its way through the system,” the report says.

Master Builders Australia’s latest forecasts also point to housing remaining strong in the ACT, particularly when compared with the rest of the country, although it sees some ‘softening’ ahead.

Master Builders ACT CEO Michael Hopkins said: “During 2017-18 the ACT’s housing sector had boomed to produce 4994 new dwellings, however over the three months to October, new dwelling approvals fell back by 7.8 per cent indicating residential building activity might see some softening over the coming months. Engineering construction also slipped by 7.1 per cent over the year to September 2018 due to the ‘hump’ of the light rail project being crossed.”

Deloitte Access Economics says commercial construction is in good shape, with the value of work done growing by more than a quarter in the latest data and the pipeline strong in the retail, education, health and accommodation sectors.

All up, there are $2 billion worth of projects under construction, with a further $2 billion across the various planning stages, boosted by the $500 million redevelopment of the Australian War Memorial.

The report says that the return to Commonwealth surplus is also a positive for the ACT, with less chance of public service job cuts.

In fact, the ACT has benefited from a lift in Commonwealth Government spending, and helped by low interest rates and the lower Australian dollar, which has made the Territory’s higher education sector more competitive and attracted more international students.

“Much like other tourists, foreign students add to spending in local shops, restaurants and increase demand for housing. This has contributed to the good retail trade results over the past year,” the report said.