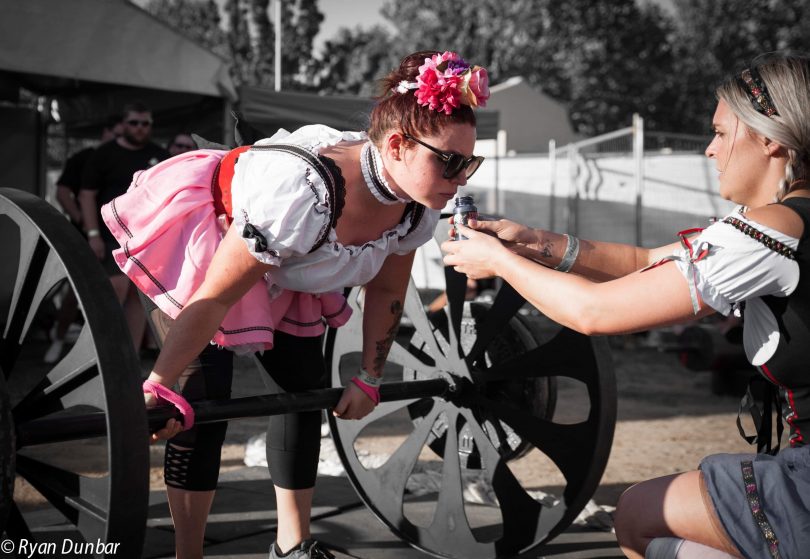 Renaye Watchirs will take on the axle deadlift as part of the Strongman competition at this weekend’s Oktoberfest at the Queanbeyan Showgrounds. Photo: Ryan Dunbar.

When Canberra’s Renaye Watchirs sees something heavy, her first thought is “can I lift that?”

Renaye has been competing in Strongman competitions for about four years and loves the thrill of lifting.

This weekend, she will compete in the Strongman competition at Oktoberfest, being held at the Queanbeyan Showgrounds from today (25 October) through to Sunday.

“At the Arnolds, people have been training for a long time and that is their main focus, whereas Oktoberfest you’ve got people eating pork knuckles commenting on your deadlifts.”

This weekend’s Strongman competition is also part of a worldwide series called the Static Monsters, involving about 20 other countries.

A regular Strongman competition has five different lifts, whereas this weekend there are two static lifts – the axle deadlift and the log press, which challenges the entrant’s body weight against the maximum weight lifted, “so if you weigh a little bit and you lift a lot, you win”, Renaye explains.

“Deadlift and log press are my least favourite events, but at Oktoberfest, you get a different crowd than at a normal competition.

“We see people [at competitions like the Arnold] who are there for the love of it, and they really understand Strongman. At Oktoberfest, you get your Joe-blows who have all these opinions in the world but have never stepped foot inside a gym. I always find that very entertaining.

“It’s a fun thing to do and not many competitions end with the ability to have a stein of beer, which is pretty excellent.”

Renaye said the attraction of the sport is the community, with Capital Strongman Incorporated facilitating the competitions.

“They have the equipment, they provide the advice, they put on the events and have an amazing team of people who volunteer to do that in their spare time.

“I train at Victor Strength Collective which has like-minded people who build you up and make you feel empowered about what you do.

“I believe that every woman should lift weights. Some of my best friends are from Strongman and it’s a great way to keep in shape and feel great about yourself.

“Lifting heavy stuff is also really cool, but for me, it’s the people in the community who make it special.”

Oktoberfest has 50 years’ of German experiences over three Wunderbar days. There will, of course, be lots of German beers and food, as well as music and dancing.

There will be competitions involving beards (the Beardmeister), beauty (Miss Oktoberfest) and brawn (the Strongman). Sunday is family day with plenty of market stalls.

There are also free amusement rides and children under-18 are admitted free (but children are not permitted after 6:00 pm). There are free bus services from Canberra City, Tuggeranong, Woden, Belconnen and Bungendore.

Tickets for Oktoberfest are available for pre-purchase here.