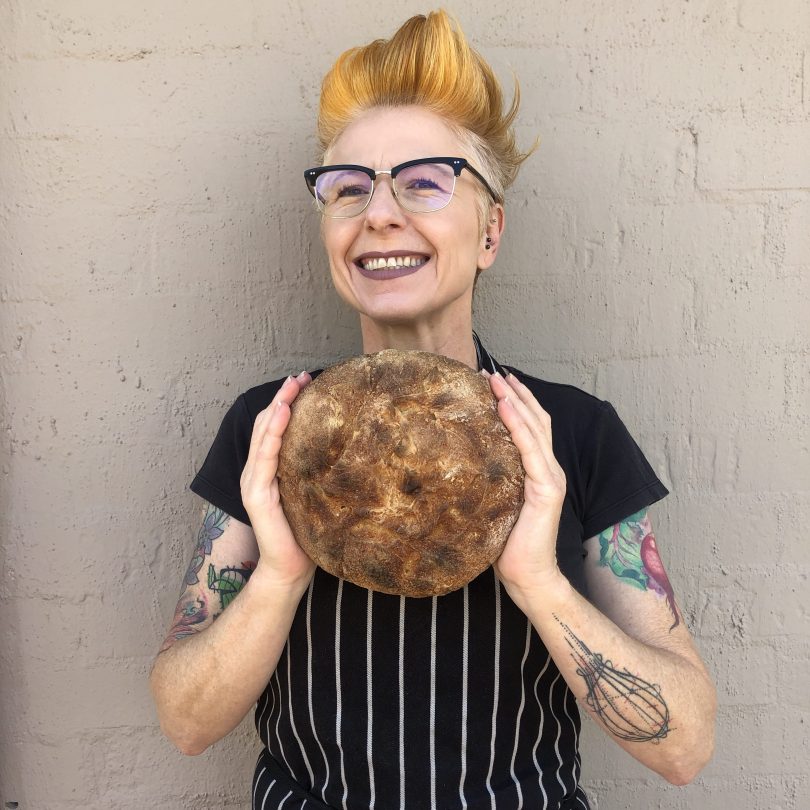 Baking sourdough bread has proved to be the perfect starter for chef Frankie Bodel, who lost her job last week.

As the COVID-19 pandemic took hold, Frankie said she found baking to be a very calming process.

“The simplicity of only a few ingredients can create something so incredibly nurturing,” Frankie told Region Media. “The smell in the house is like a big warm hug – something you can’t get from just anyone nowadays.”

The now unemployed former resident chef and cooking school manager at Foodish cooking school at Belconnen Markets said she had a feeling her job would be at risk, so she began selling fresh or dehydrated sourdough starter from home.

A sourdough starter is also called levain, which is a fermented dough filled with natural, wild yeast and a bacteria called lactobacillus.

“Sourdough is an incredible beast,” says Frankie. “There’s a story of some found on the inside of a pottery jug in ancient Egypt that was dated around 4500 years old. It was activated and bread was baked from it.”

The starter provides a lifetime of sourdough bread, provided its owner continues to nourish it.

Frankie is now mailing dehydrated sourdough starters to all parts of Australia for $10 each, which she says may not be a great business model, but may be the beginning of something bigger.

She can also deliver – with social distancing measures – fresh sourdough starter to your home or via contact-free pick-up from her front deck. Electronic payment is arranged and full instructions and a link to a detailed recipe with photos are sent via email. 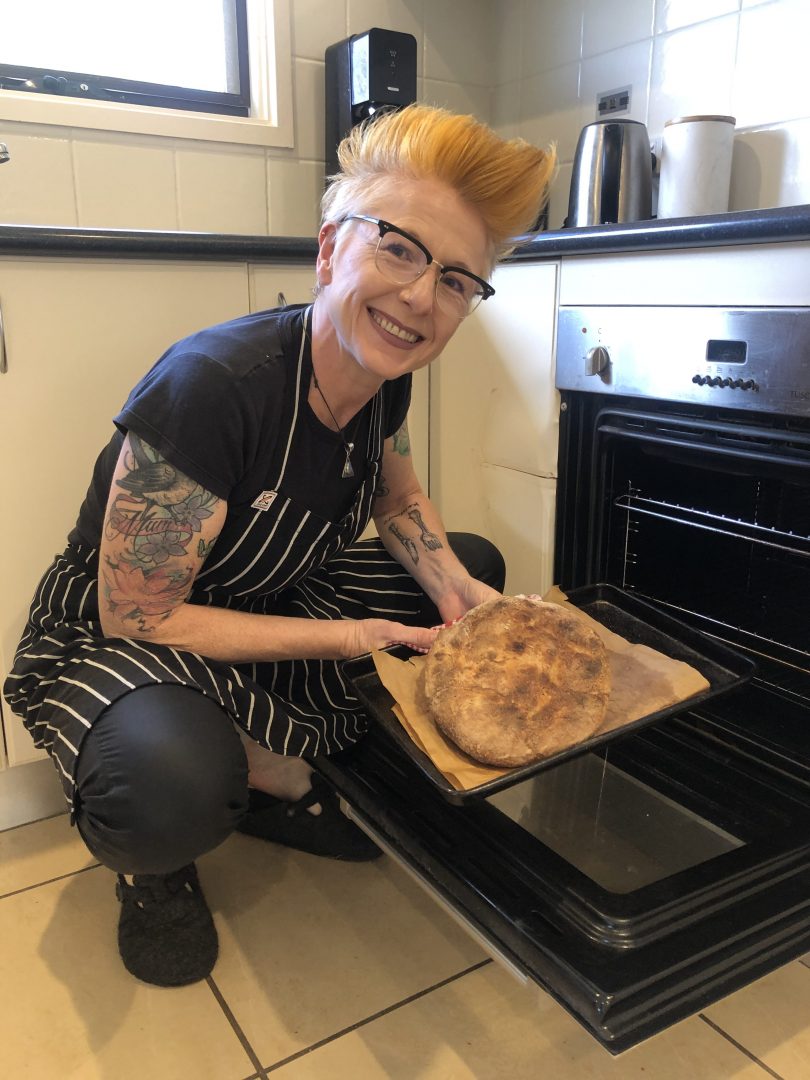 Frankie says “the smell in the house is like a big warm hug” when sourdough is in the oven. Photo: Supplied.

Frankie says people turn to comfort food in times of crisis, and a good loaf of bread was right at the top of her list.

“Sourdough takes an extremely long time to prepare before it’s ready to be baked,” she says. “You need to feed up your starter for at least a few days until it is active and bubbly. Then you need to make levain from that starter, which you’ll let rest overnight. Only then are you ready to start the process.

“It takes kneading, folding and resting for around eight hours before it can be popped in the oven.

“An incredible amount of love and nurturing is required and that’s what we have time for now. I’m being contacted by so many people saying they’ve wanted to make sourdough for years, but only now do they have the time due to isolation.”

Frankie has already posted dehydrated starter all over Australia, including Tasmania, Western Australia and Katherine in the Northern Territory.

Proud sourdough break-makers are sharing their results, which Frankie says, may lead to a nationwide sourdough challenge.

“Last week, people were posting results of their baking, so it’s building a real sense of community by keeping people connected. That’s one of the wonderful things about a sourdough starter is you just send it off on a little journey in the mail, and those people will share it with some other people.

“It thrills me that my starter is heading off into all these different homes across Australia and will be feeding people and filling them with joy.”

Frankie has also started a page on Instagram and regularly posts tips and shares information about different sourdough recipes. Her page is called Necessity Kitchen (@necessitykitchen). For those not connected to Instagram, Frankie has a Shopify online store up and running, too.

“I called myself Necessity Kitchen because I found the saying “necessity is the mother of all invention”, and in kitchens you always have to think on your feet. Sometimes you have to pull something out of nothing.

“Besides washing your hands, there’s probably nothing more important than what we do with food at the moment. We need to be mindful of what we’re eating and not wasting food.

“It’s [sourdough starters] growing really quickly and I’m already going to the post office box and slipping lots of envelopes in the mail without them touching anything.”

One of Frankie’s starters is in the mail to Region Media and we’ll keep you posted on how we go with our sourdough.

The science of bread making is a most worthwhile and rewarding study and pastime; more power to all those that promote it. Unfortunately the home oven limits your success.

Rohan Burnside, this reminded me of you and your bread making!

we have already enjoyed loaves of bread cooked using this wonderful sour starter - thank you !

Frances J Bodel mum made a Finnish rye bread with it - fabulous !

Liisa Nurmi oh that's fantastic! Is there a photo? Tag me on Insta!

Liisa Nurmi I’m just over the way, I could exercise past your place and pick up!! 😜👍

Brendan get your starter

Heather Evans maybe this might help? I think I will give it a go

Cassandra Mann I think I’m too lazy to make my own starter! Doesn’t it take lots and lots of flour?

Cassandra Mann I’m impressed:)! we can compare notes of the cooking process?

Heather Evans want me to grab you some fresh starter? $10

Cassandra Mann shall I grab you some?

Cassandra Mann Hi Cassandra, cover it with a cloth or something breathable....

Come over to the darkside Sam!

Yup, us chefs are rolling in the cash. 🤣

We received ours, thankyou!

Purchased a couple of dehydrated packets from her- can’t wait to bake with it.

Georgina Bills I cant wait!! This will be amazing

I can't wait to see the results! Don't forget to tag me on Insta - necessitykitchen

Fiona Collison shall I buy you some?

Of course you should! ☺️☺️

Christine Seet clearly I’m not original in the slightest

God I thought that was chest hair.

I bought some starter from Frankie too! Trying my first sourdough tomorrow :)

How did that go?

Frances J Bodel I haven’t been able to get the starter looking ready yet, so maybe tomorrow 😂😂

Where is the pick up point?

Catriona Moxham - 1 hour ago
Molonglo stage 3😢 View
Capital Retro - 7 hours ago
Living on borrowed time? It's actually more like living on borrowed money, from the Territory government to the unemployed. T... View
Lesa Schuster - 9 hours ago
The housing prices need to come down, it’s very hard for many people........it’s pretty city though and does not feel lik... View
Property 19

Kalo Arepo - 8 hours ago
Were they trying to jump the queue? View
Smackbang - 16 hours ago
How about you stop passing judgement on someone you know precisely nothing about? View
Opinion 82