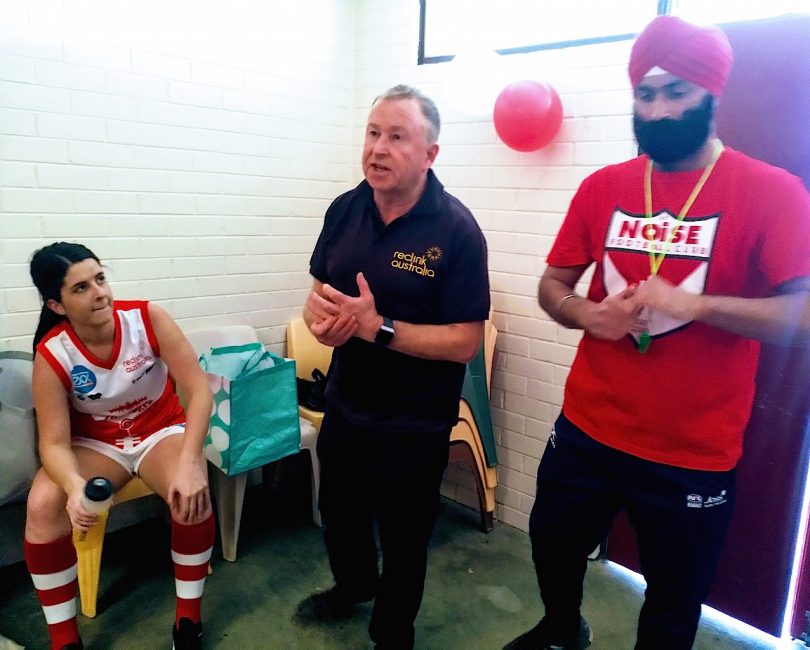 When you take a bunch of musicians and local media and put them in football boots, one thing’s certain: there’ll be plenty of noise.

On Sunday at Jamison Oval, The Limestones (musicians) and The Noise (media) faced off in the third Reclink Community Cup, and while The Limestones banged the drum to retain the prized trophy, it was not before The Noise almost stole their thunder.

It came down to the last few desperate minutes as The Noise, down by four points, continued to pressure The Limestone’s defence.

ABC Radio’s Tom Maddocks had the ball about 20 metres out and on an acute angle tried to snap the winning goal. The ball ricocheted off the posts. From there, the writing was on the wall for the local media cohort.

A draw would have been a fair result, but when the final siren sounded it was 52 to 49 to The Limestones. It gives The Noise the chance to return next year with more metaphors than a Bob Dylan song about things that blow in the wind.

Before the match began, the eager crowd knew there were more than bragging rights at stake.

After the community choir ushered in proceedings to the strains of the Paul Kelly classic From Little Things Big Things Grow, The Limestones linked together a couple of early goals. The Noise replied and both teams finished the first quarter with full voice but looking for a second wind.

Running to what became the goal-scoring end, The Noise made sure their actions were louder than words with a couple of goals to go to into half-time with a handy 26-18 lead and aspirations of making further headlines.

After some quality entertainment by local musicians during the break, things became a little more serious in the third quarter when The Limestones called on strength in numbers from their male players to silence The Noise, who remained true to their strength of maintaining balance at all times.

However, The Limestones tried their hand at sensationalism by making a mandatory streaker run. The typically cool afternoon Canberra breeze did little to distract the focus of The Noise, but it did deliver three goals in succession to The Limestones that left The Noise looking for anecdotes about not giving in when the chips are down.

The fourth and final stanza had grandstand finish written all over it. The Noise posted the first goal before a quick reply. The Noise pushed forward. The Limestones pushed back and the margin was just 10 points with less time than a Pink Floyd masterpiece to go.

Another goal to The Noise and they sensed their inaugural victory. With less than a straight kick in it, both teams were desperate at every thrust and parry as the standard of football rose despite legs that were running on empty.

Unfortunately, that straight kick hit the post and The Limestones held on for another heart-stopping win.

Most importantly, more than $5000 was raised for Reclink. Reclink links people in need to other support agencies such as medical, mental health, housing and whatever is needed.

Reclink founder Peter Cullen travelled from Melbourne and made a passionate speech before the game.

With that, teams took to the field knowing they had already won.

Jimbo Lambert - 13 minutes ago
Justo Justo some people have driven that stretch of road for 30 or 40 years at 60km/h. If they suddenly reduce the limit it i... View
Dean Soccol - 2 hours ago
Nathan Grieve in Queensland every time we get a fine we lose points. So if you are one of those that don’t care about the m... View
Nathan Grieve - 2 hours ago
Andrew Nelson not every offence comes with demerit points, so unfortunately that statement is incorrect View
Community 8

Julie Nimmo - 2 hours ago
I met Sue often. Always gracious and dignified. So very saddened when I heard that a 4x4 had killed her on the Com Av Bridge.... View
Louise Roberts - 4 hours ago
Sue was my daughters primary school teacher. My daughters favorite ever teacher. We still talk about today. Well deserved Sue... View
Opinion 90