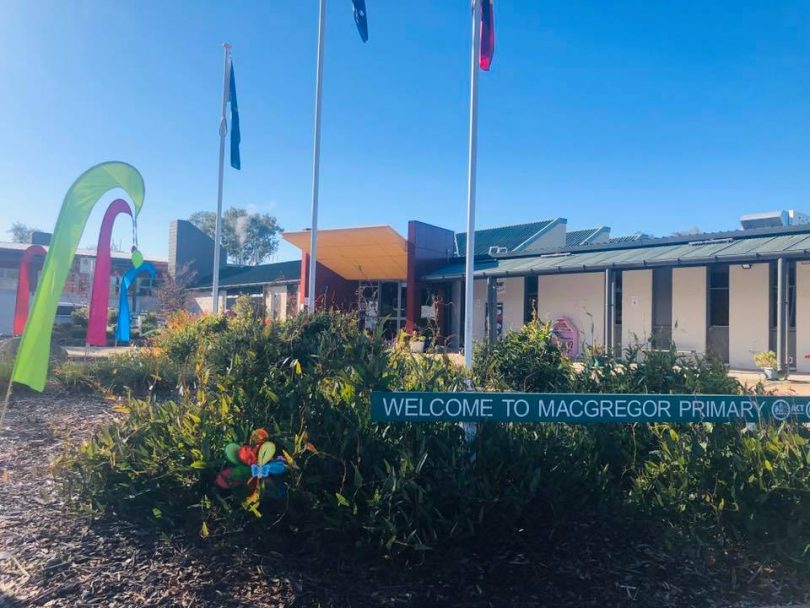 A large cohort of students from Macgregor Primary School in Canberra’s north has returned to remote learning arrangements today (31 March) after teacher shortages made it impossible for the school to run its usual programs.

In an email sent to all parents yesterday afternoon, school principal Belinda Andrews said in recent weeks the school had experienced “limited teacher availability, primarily due to staff isolating with COVID-19 or as household contacts”.

Year 4, 5, and 6 students will learn from home until next Friday, 8 April, when it’s “anticipated” they can return to campus.

During this time, face-to-face lessons will continue as normal for all preschool and kindergarten to year 3 students.

Children of essential workers and vulnerable children will still be able to attend school and be supervised while accessing the same remote learning program.

“Where possible, we encourage you to support your child to access their remote learning from home,” Ms Andrews said in her email.

“Your patience and kindness is appreciated.”

Macgregor School is the first ACT school to turn to remote learning under level three of the Education Directorate’s staffing shortage management plan for this year.

According to the plan, level one shortages can be dealt with using casual staff and existing staff members. Under level two, schools have access to a centrally managed pool of casual staff.

The teachers’ union said it’s unlikely Macgregor Primary will be the last Canberra school to move to this arrangement, particularly in the lead-up to the colder months as a surge of COVID-19 cases and flu infections is expected.

Australian Education Union ACT branch secretary Patrick Judge said the union was satisfied the right decision had been made under the circumstances.

“Our members are telling us that they’re under increasing pressure with staff absences which we’re expecting to potentially get worse over the next term,” he said.

Last week, two public high schools in Queanbeyan turned to remote learning after many teachers were forced into isolation as positive COVID-19 cases or as close contacts of one.

However, this decision was reversed by the state’s Department of Education, angering teachers from both Queanbeyan and Karabar high schools who went on strike and have threatened further industrial action if the NSW Government does not address these issues.

This morning, Minister for Education Yvette Berry said staff shortages had been planned for and anticipated since the beginning of the year and there is no “magic supply of teachers” to fill shortages.

COVID-19 has exacerbated staffing gaps that already existed at a national and local level.

Earlier this week, Mr Judge told an ACT Legislative Assembly committee inquiry that some teachers were “scared” when they found themselves in situations where classes were combined, and they had sole responsibility for 60 high-school students at one time.

“We continue to receive reports of there being insufficient staff to replace teachers who are absent, of classes having to be split and collapsed, of single teachers dealing with 50 or 60 students at a time,” Mr Judge told the hearing.

He said that a task force has been set up to address teacher shortages in the ACT, but it had run into “challenges”.

School COVID-19 infections have remained high in recent weeks with just over 1500 cases reported in ACT schools in each of the last two weeks.

QUEANBEYAN schools are doing it too🤬 they can’t expect parents to be teachers!!!!

Teachers are not there to babysit students. If you don’t have enough supervision, then you have to have the students stay home FOR THEIR SAFETY.

Aneta Petreski I don’t think anyone has asked parents to be teachers. Just look after your children while there isn’t supervision.

Aneta Petreski you’re going to plan lessons for 25+ individual students? Not to mention considering this is primary school you’ll need to plan for the whole day and for all subjects as well as ensure you’re differentiating for those kids who need extra assistance with their reading, maths and other subjects? You going to mental health triage 25+ individuals who struggle to understand what’s going on and the constant back and forth they’re experiencing? How about contacting the parents of those 25+ individuals to walk them through their worries and concerns as well? Then at the end of the day you can mark all work completed and give feedback before you adjust the rest of the week’s activities based on what they got and what they need to work on more? You’ll need to make sure you’ve gone through all that work to know that too.

By the way, for high school you’ll do this for 150 to 200 individuals. So yeah, you want to do all that then fine, come see me we’ll have a chat and then you can get back to dealing with your couple of kids at home.

Aneta Petreski you aren’t teaching. You are helping.

I expect to be paid more for actually putting the work together, marking all the assessment, writing all the lessons, dealing with emails until 10pm at night and on weekends.

And then, there’s my own family.

But you keep thinking what you as a parent are doing is “teaching”.

Melissa Neville
Darren Neville
!!!
what the

The ACT Education department will allow that?

Onelia Herriot why wouldn’t they?

Onelia Herriot allow unsafe supervision of children because there is no staff available let alone try and teach a curriculum … of course they won’t. This is not something that the teachers chose (I am sure they don’t want Covid or be in isolation as a close contact) this is the Education Depts response to staffing availability.

Giles Tranter thinking of NSW’s response to the same issue.

They can’t staff it

I was librarian at cook primary. It was an INCREDIBLE school. Margaret May is a PHENOMENAL woman.
Please stop this homogenising of our kids. They’re not all the same, they’re not robots, they’re our future. What future…

Jen Howard-Gilchrist 🙂 she’s a blessing and a huge boon to childrens education across the state. She’s been many times promoted from Headmistress all those years ago I still remember her fondly, her deep compassion and her ceaseless, driven energy to help others and see them fairly treated. She made space when there wasn’t already existing. That’s rare ❤️ I wonder what she might make of this?

Maddie Ten I think she would be focused on the children and would bring her science trolley in stacked high with resources and teach the whole school in one lesson! Such an inspiring educator!