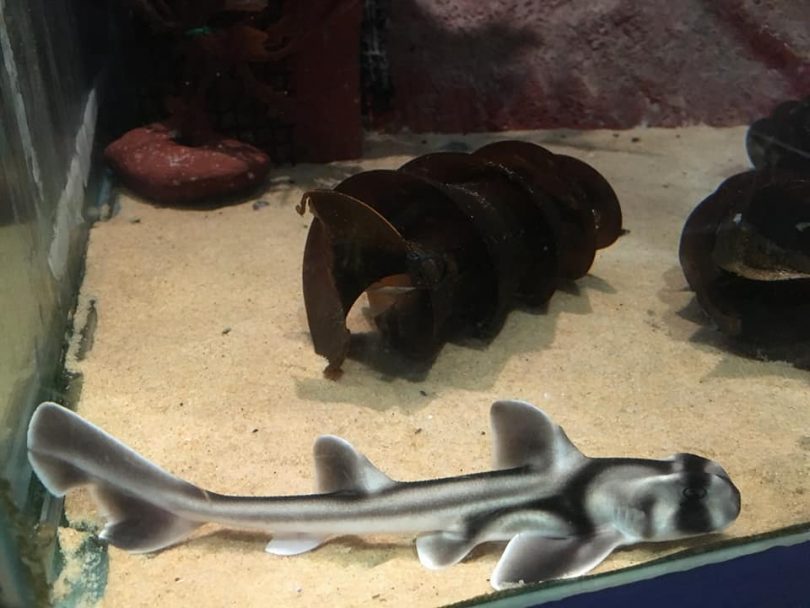 One of seven Port Jackson sharks born at Merimbula Aquarium this year, with eggs in the background. Photo: Supplied.

Merimbula Aquarium curator Harrison Vermont has an eye for an unhappy fish.

“You get to know them and you can spot it when they’re not happy,” he says. “It’s hard to explain but everyone who spends time here can tell.”

Merimbula is the only temperate aquarium in Australia after Manly Aquarium in Sydney closed its doors in 2017, and the team often find themselves lowering a net off the side of the wharf to collect an interesting specimen a fisherman has found.

In most of the tanks, unheated and untreated ocean water flows through them, mimicking the wild environment.

Harrison says that mostly, the marine creatures at the aquarium appear happy and that if they’re not, they can often safely be put back in the ocean.

“And when they’re happy, they breed,” Harrison adds with a grin, “and we have to decide what to do with the offspring.”

As well as seven newly hatched Port Jackson sharks, the aquarium has a huge batch of Giant Cuttlefish eggs, which Harrison expects will hatch in the next month and be released into the ocean, as cuttlefish populations are declining. 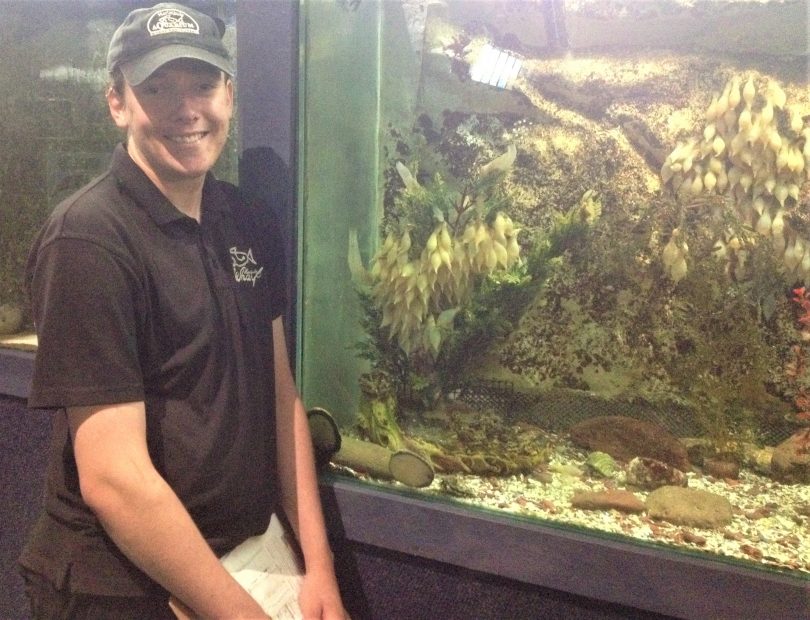 William Marshall-Grey has been volunteering at the aquarium for three years and is seen here with giant cuttlefish eggs. Photo: Elka Wood.

Wharf Restaurant and Aquarium has been owned by Sally and Anthony Daly since 2001 and Sally says that when they do have creatures breeding, they always want to keep them.

“We like to hang onto our babies,” she laughs. “It’s good for the community to see them grow and succeed. But we also trade them with other aquariums.”

Cuttlefish are rarely found in aquariums and volunteer William Marshall-Grey says theirs is one of two known to have bred in captivity in Australia.

As well as standing in for a male cuttlefish, Harrison and William got to check on the shark eggs, whose softshells can be opened during the year-long gestation, and William even got to witness the eggs being laid.

“I was fortunate enough to see one of our mums lay eggs. They usually lay two at a time and it’s similar to human birth, they have contractions and it looks sort of painful,” William comments. 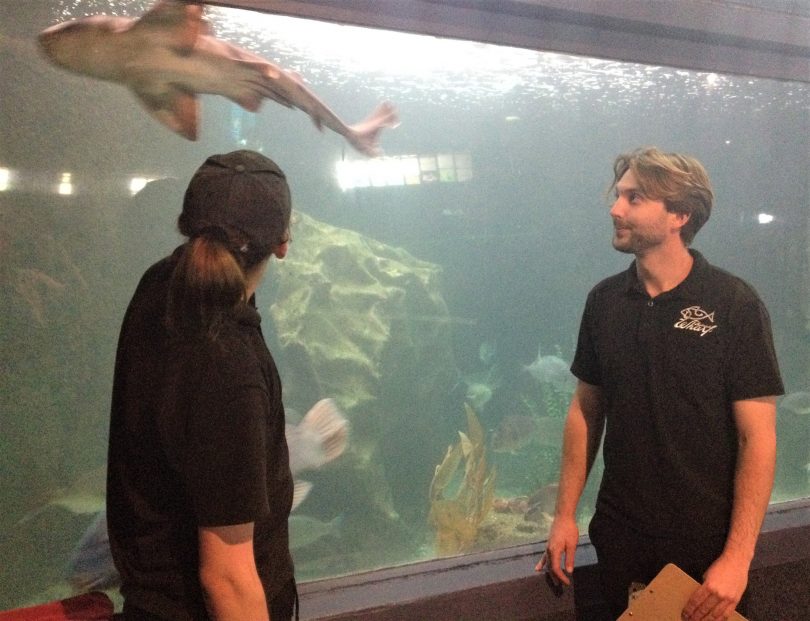 William and Harrison in front of the large tank which holds the adult Port Jackson sharks. Photo: Elka Wood.

Seven eggs were fertilised out of a total of 25 from three mums, a 100 per cent success rate for the aquarium team, although they are quick to acknowledge that they didn’t do much except keep the eggs safe from predators.

“In the wild, they have a one per cent survival rate. The eggs and babies are very vulnerable. The Port Jackson sharks, in particular, are such docile little things, like puppies,” says Harrison.

While the eggs are maturing, the soft shell can be peeled apart and you can check the shark’s development.

“They have a yolk in there, it’s just like a chicken egg but a bit paler,” William explains. 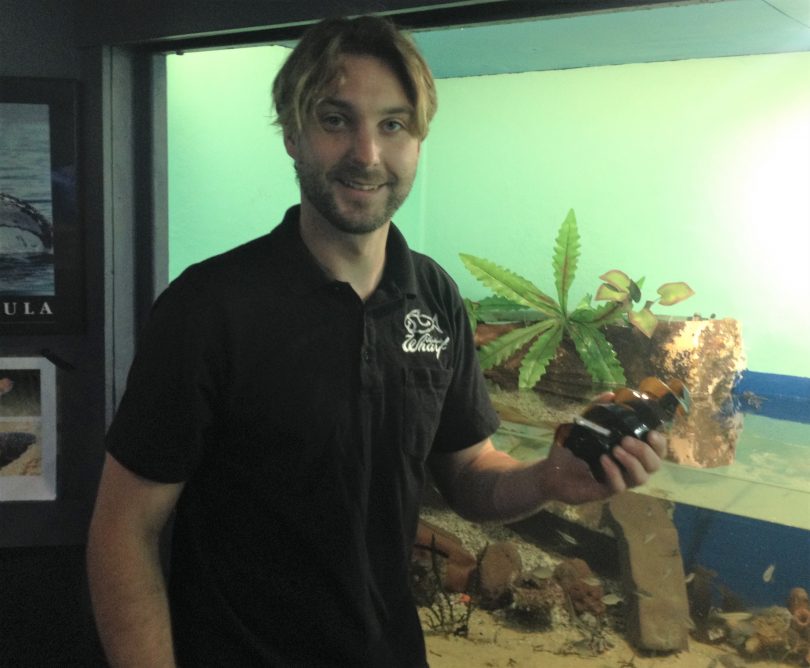 Curator Harrison Vermont with one of the hatched eggs. Photo: Elka Wood.

Port Jackson sharks are common in shallow, rocky areas, including around the Merimbula Wharf and are non-specific, omnivorous feeders.

“They’ll graze on seagrass and seaweeds or just sift through the sand on the bottom looking for worms or other small bits of food,” Harrison says of the babies. “They can even survive on vegetable matter alone but we give them bits of prawn and mussel, too.”

(Speaking of mussels, did you know that pufferfish are some of the only natural predators of mussels? They have a heavy bone jaw like a hammer, made for crushing the shells.)

Spending time in the aquarium is constantly illuminating, not just for visitors but also for staff and for Sally, who says “the aquarium has such a community feel, we want to educate about what’s down there”.

What’s down there includes more and more tropical fish, who end up in Merimbula after taking an accidental summer holiday on a southern current, a sign of a changing climate. The aquarium has five heated tanks for these special fish.

“The ocean tells us a different story every day. We love being here,” Sally says.

Capital Retro - 6 hours ago
Now for the wind turbines. View
Dean Okeeffe - 6 hours ago
you'd think with all their planning did territorial birds not factor in. View
Henry Kivimaki - 7 hours ago
Can we train the birds to attack the work cover drones? .. 😏😉... View
News 83

Pat Gagel - 6 hours ago
Even when announced in 1963, the current station was reported as 'temporary'. The long term station was earmarked for Piallig... View
Pat Gagel - 7 hours ago
There is still the 'Government Siding' between Yallorn and Whyalla Streets in Fyshwick. Question is, since self government, w... View
Opinion 14

Anthony Willing - 7 hours ago
Paul Mills the same as every old / wheelchair person in every multi-storey in every city in the world.The fire brigade have s... View
Anthony Briscoe - 8 hours ago
Canberra more and more of this type of development will happen under the Barr Government. Just wait till the tram goes to Wod... View
Paul Mills - 9 hours ago
Becoming a common Canberra vista. View
News 128