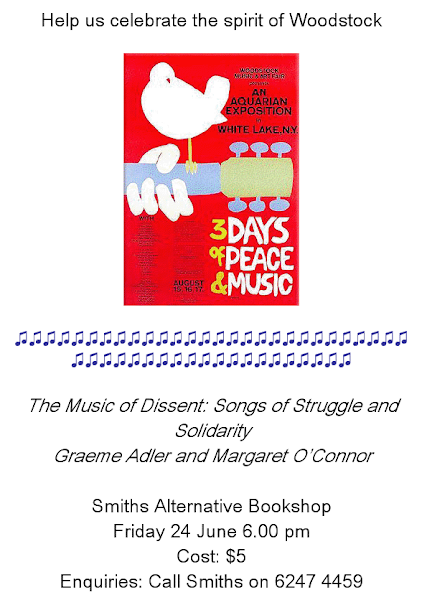 Come join us at Smiths on Friday the 24th of June to celebrate the spirit of Woodstock with Graeme Adler and Margaret O’Connor. Doors open at 6pm and cost is only $5!

Graeme Adler and Margaret O’Connor are two very versatile local performers who between them sing, play guitar, violin and keyboard, and have a huge array of material which they draw upon from time to time to unleash on an unsuspecting public.

They’ll be performing at Smiths Alternative Bookshop this Friday night at 6.00pm and will be drawing upon songs from the protest era.

Mark J Avery - 23 minutes ago
Try working next door to this dumping ground!! View
Roger Kropman - 4 hours ago
This is a disgrace but it reinforces the point that rubbish dumps / tips should be free to dump your trash, otherwise idiots... View
Nick Savino - 8 hours ago
CCTV and fine View
News 14

nobody - 56 minutes ago
JC, I haven’t said we shouldn’t change, I think the subsidised change to roof-top solar, with the numerous small inverter... View
Ol L - 59 minutes ago
I foresee a further rise in electricity costs….. View
Bill Gemmell - 2 hours ago
The intention is a noble one. By capturing the excess daytime renewable energy pumped into the system we then have available,... View
News 22

@The_RiotACT @The_RiotACT
Snapper at the Canberra Southern Cross Yacht Club is getting a makeover. Check out the plans https://t.co/Ul1f9X7YUR (19 minutes ago)