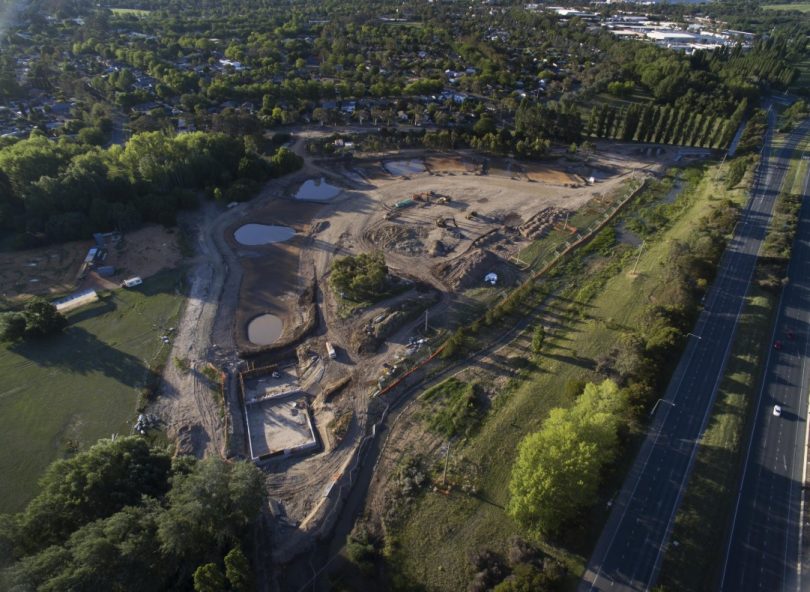 The soon-to-be Narrabundah wetlands will provide an ecosystem that will help reduce sediment and pollutants in ACT waterways. Photos: Supplied.

Construction has started on wetlands in the Fyshwick catchment that will clean stormwater flowing into Lake Burley Griffin and downstream into the Murrumbidgee River system, as well as being a haven for wildlife.

ACT Senator Zed Seselja joined the ACT Minister for the Environment and Heritage, Mick Gentleman, to mark the occasion on Thursday (24 January).

“These new wetlands will help reduce the amount of sediment and other pollutants flowing into Jerrabomberra Creek and on into Lake Burley Griffin,” Mr Gentleman said.

The Narrabundah wetland along Jerrabomberra Creek will be 420 metres long and include a chain of six open, 1.2-metre deep ponds, a sediment basin, a high-flow diversion structure and bypass channel to protect the site from flooding. The creek will be widened to about 18 metres.

The wetland was originally designed as a large, permanently inundated wetland to the east of the creek, but there were concerns about its appeal to large water birds and the risk of bird strike at nearby Canberra Airport.

The new design, with smaller ponds and treatment area, minimises that risk, allows uninterrupted fish passage through the reach and enhances habitat diversity. 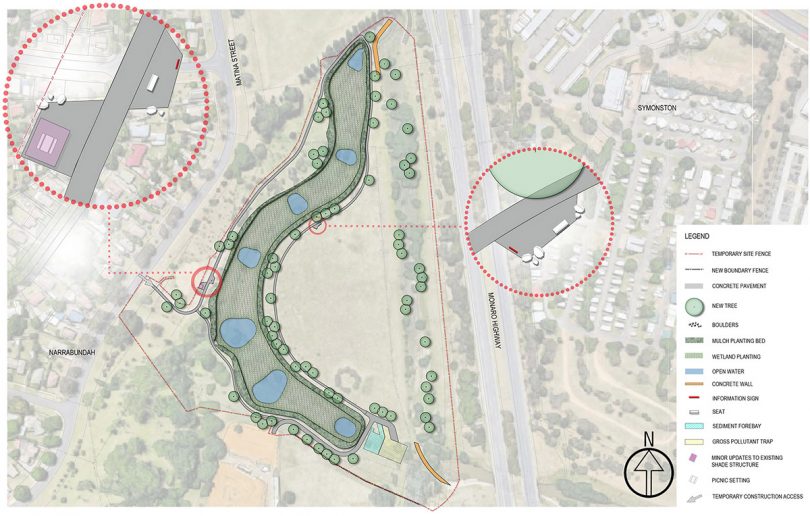 Mr Gentleman said the project was part of the Government’s ongoing commitment to protecting the ACT’s environment and keeping local water catchments and habitats clean and safe for native species.

“This will provide cleaner water and improved habitat for fish, birds and frogs, along with a wider, cleaner and better creek running through improved green space that the Narrabundah community will enjoy,” he said.

The Narrabundah wetlands are due to be completed by March but will take a further two years to be fully established.

The other wetlands are at Eyre Street in Kingston and off Dairy Road in Fyshwick. Combined, the three projects will remove 114,000kg of nitrogen, phosphorous and suspended solids every year from stormwater that flows into Jerrabomberra Creek.

Senator Seselja said the wetlands would play a critical role in improving water quality in the ACT, downstream in the Murrumbidgee River system and in the wider Murray–Darling Basin.

“The nature of the catchment, with its industrial and agricultural run-off, made it a priority from day one of the project,” Senator Seselja said.

The Australian Government was contributing up to $85 million in ACT Healthy Waterways, which has the biggest footprint of any water quality infrastructure project ever undertaken in the ACT.

“Some of the individual projects are world-leaders in terms of size and scope and I’m glad to say the Healthy Waterways program is being delivered on time and on budget, which has allowed for an extra infrastructure project in Tuggeranong,” he said.

All 20 infrastructure projects are scheduled for completion this year.

As well as the infrastructure projects, ACT Healthy Waterways is funding two pioneering research projects into water quality, and the H2OK community education program promoting ‘only rain down the stormwater drain’.

This is great news. The Silt trap can’t handle it on its own so upstream wetlands should really pay off.