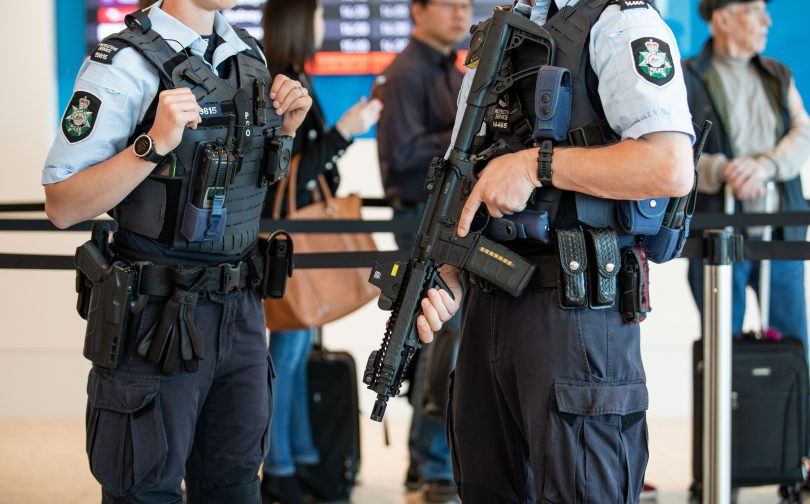 Police armed with short-barrelled rifles are not in response to an increased threat level and should not concern travellers. Photos: Supplied.

AFP protection officers will now be armed with short-barrelled rifles at Canberra Airport as part of a $107 million roll-out of the new measures across the country over the next 18 months, but the public is being told that this is not in relation to an increased threat level and will not impact travel times.

The Government says Canberra or Brisbane will see these new officers patrolling before Christmas. Over the next six months officers armed with the new capability will be present in Sydney, Melbourne, Perth and the Gold Coast, followed by, Cairns, Adelaide and Darwin Airports in 2021.

The rifles will allow officers to respond to incidents more accurately and from a greater distance.

AFP Commissioner Reece Kershaw says the rollout will make sure that Australia has world’s best practice for responding to terrorist incidents. 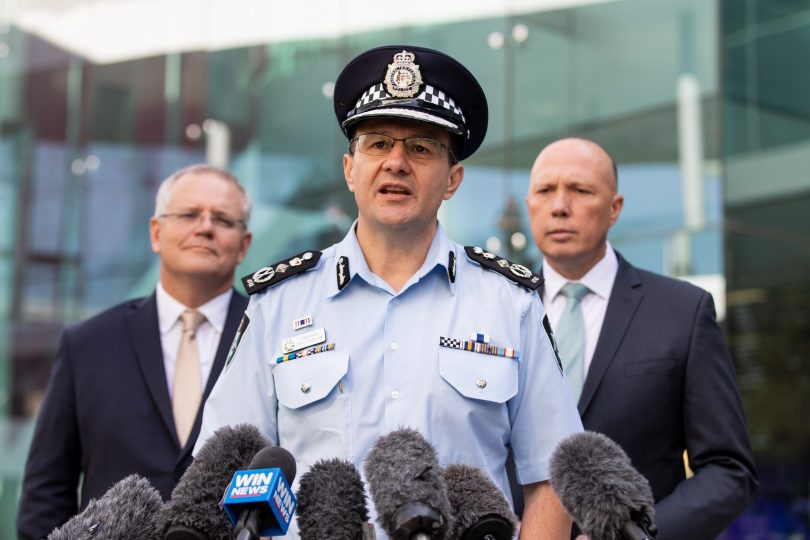 “Members of the public should be aware while there will be no changes to the way they move through Australian airports, they will start seeing Protection Operation Response Team officers patrolling alongside general duties members,” he said.

“The roll-out comes as part of a Government-funded program to bolster response capability and protect the travelling public in busy environments.

“This is an additional capacity which will provide greater support for officers responding to high-risk incidents and ensure continuing safety for the travelling public.”

The Aviation Security Enhancement Program (ASEP) is being rolled out across nine Australian airports to better equip officers when responding to threats and explosive risks immediately.

Teams will perform a dedicated first responder role for terrorist incidents, while airport officers will be wearing body cameras to capture how they respond to critical incidents, and will also aim to deter illegal activity.

The ASEP was designed in 2017 after police foiled an attempt to smuggle an explosive device on an airplane, with the Federal Government providing $107 million over four years to increase aviation security. 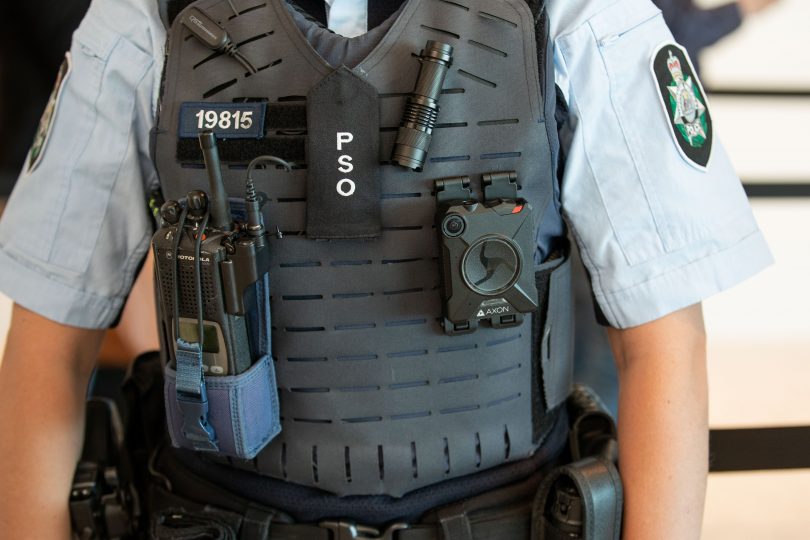 Airport officers will be equipped with body cameras to enable them to accurately capture their responses to a critical incident.

Perhaps they can repel the pollies?

Hmm I think we should worry.

It's a soft introduction to a militarised police force. It's just the airport and nothing to worry about, tomorrow it's Canberra centre and the light rail.

Either there's an actual threat and they're not telling us, or ...

Being a member of SSAA I attend our Majura range for weekend shoots and doddle up there two ot three week days per month to test my latest batch of ammunition, zero sights etc. I’ll often hear Border Force and the cops up at the “Terry O’Brien Range”, a semi enclosed firing range dug out of the hillside.

So I wander up there for five minutes or so at the gate and watch them in action. They don’t like an audience and I s’pose I can understand why. As I wander off back down to the carpark I wonder when they’ll learn to shoot straight. In an airport terminal situation I’d be worried sxxxxxxs about rounds spraying around all over the place.

If the authorities are going to be fair-dinkum about preventing terrorist attacks at our airport they need also to remove all garbage and recycling bins and replace them with frames holding clear plastic bags so anything suspicious can be visually detected and appropriate action taken.

This is usual in most European countries. Also practiced in shopping malls and pedestrian thoroughfares.

That only increases the terror or fear one feels as they enter the airport. Hmmm maybe this is the idea behind it. After all fear is good for the LNP

Faith J. Humphries you are so right Faith

Didn't see them there last Saturday

Detractors live in a fantasy world. This is the airport of the national capital. It is used by politicians. It is easy to access. It is a prime target, just as other airports around the world have been targets for terror. We should be reassured by police present. Who would be the first to bleat if there was an attack with inadequate protection?

5.56mm rounds in an airport or surrounding area = over penetration = dead civilians.
Curious that the only hardened areas are the ones where the pollies interact with the public (parliament house and the airport). All this does is push anyone intent on causing mayhem onto softer targets like anywhere else in Canberra.

Awful... create unnecessary anxiety for travellers,creating fear rather than welcoming.

Unfortunately Canberra Airport is a rather obvious terrorist target, It is one place you can guarantee being able to target politicians.

Of course there are good and bad ways of increasing security, but a strong visible security presence can help.

Many people seem to forget that around the time out country was consumed with angst and self loathing over the Christchurch mosque attack, a would be terrorist in Australia was convicted of trying to destroy an aircraft in flight.

There have also been attacks overseas at airports themselves.

Unfortunately this is a side effect of multiculturalism. Those who sing the praises of such policies have to also face the downside.

So, people would rather wait until an incident occurs before they would be happy with preventative deterrent measures being taken?? I just hope these pundits will not be victims of the incident that they are insisting occurs before anything is done!!!

I went to Europe earlier this year and men heavily armed and body armour was very visible at the airports. It’s become part of the world we live in due no part to terrorism

James Gent yes and it could happen here. I am all for it.

Wonder where they’ll be if two bikie groups have a brawl, like in Sydney airport a few years ago. The guards there were nowhere to be seen.

I don't see why Canberra airport needs these weapons but it does say that melbourne etc will follow suit by 2021. It doesn't make me feel unsafe though? If something was to happen would you prefer they have glocks or rifles? Rather have it and not need it... However I don't understand why they need to be walking around in direct view of the public.

Hahaha Canberra Airport? It's as busy as rose cottage on a Saturday morning...funding wishlist, not necessity.

I did see Armed police in every European airport on a recent holiday. I was quite smug thinking......thank God Australian airports are above this.

Obviously I was wrong”

I want one. Dear Santa Ive been good, while others have been naughty

Joshua Andrew Morgan - 1 hour ago
Jayne Denise or just CAN the TRAM View
Jim Jim - 2 hours ago
Paula Simcocks I’m in Downer and I didn’t see the $150 rebate that was claimed to be for all and supposed to be listed on... View
Paula Simcocks - 4 hours ago
Liberals letterboxed Downer saying no rates cuts - we pay rates there and have cuts View
Property 7

Stephen Esdaile - 5 hours ago
Can't vote Liberal, not voting Labor or Green. Looking at what the progressive are offering.... View
Frank Koch - 7 hours ago
Phillip Business Community well said View
Martin Miller - 10 hours ago
Charny Barney no 'whackadoodle ideas here . He's just plain arrogant to those who disagree with him. There is no real consult... View
News 42

Jak Kanard - 7 hours ago
If this is true, and not compromised by the buffoonery masquerading as ‘government’ in the ACT, bring it on ! View
Emerson Yang - 9 hours ago
Jack Gabriel decent sale prices View
Opinion 1