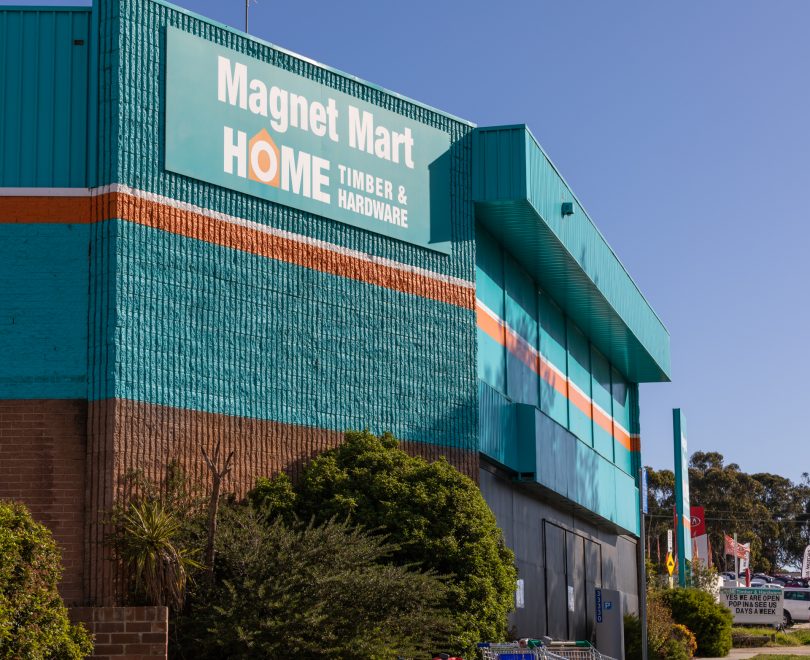 The Home Timber and Hardware store at Phillip will close its door at the end of May. Photo: Region Media.

The Woden area will be without a hardware store for the first time since the 1970s following the closure of the Home Timber and Hardware store in Phillip.

A store closure notification, posted on the store’s entrance and dated 22 April, informs customers the business will cease trading on 24 May.

A spokesperson for Metcash, which owns the hardware franchise, confirmed with Region Media that the hardware store would no longer be trading after the landlord decided not to renew the lease.

Paul Donaghue first opened the store as Paul’s Home Centre in Phillip in 1972, making it one of the longest-lasting Canberra hardware stores.

Mr Donaghue sold the store for $4.25 million to the Woolworths-backed Danks conglomerate that included Lowe’s in 2010. The store in Phillip, as well as those at Gungahlin, Queanbeyan and Goulburn, were rebranded as Magnet Mart Home Timber and Hardware.

In 2016, Home Timber and Hardware was sold to Metcash, the parent company for the independently owned IGA and Foodland supermarkets, and liquor stores including Cellarbrations and The Bottle-O.

“It is with great sadness we advise you that your local Home Timber & Hardware store located at 101/103 Hindmarsh Drive Phillip will cease trading on 24 May 2020, due to reaching the end of our lease.

“This Magnet Mart has been serving the local community for many years, providing essential products and services in the DIY/retail and trade hardware sectors.

“Our team at Magnet Mart would like to extend our thanks to you for your support over the years — we are proud to have been able to provide you with all your DIY/trade products over this journey.

“Following this site closure, we would be pleased to serve you from any of our other stores in the ACT at Mitchell, Queanbeyan or Karabar.” 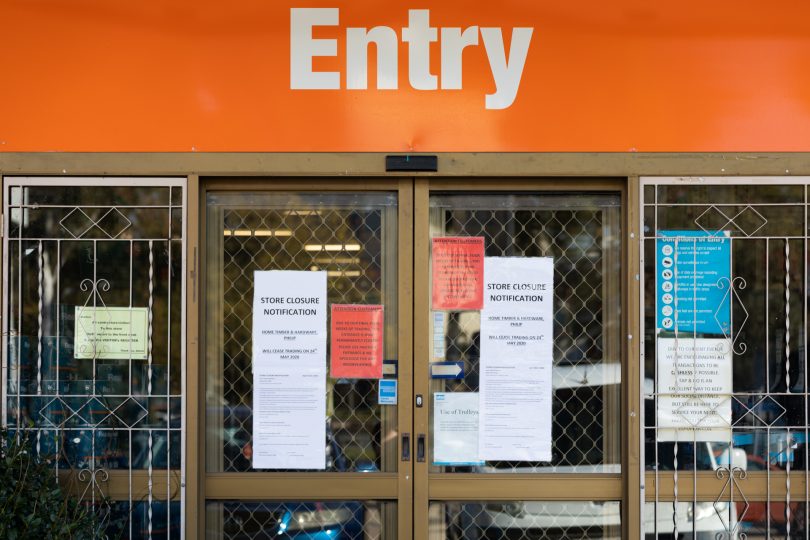 Notification of the closure of the Home Timber and Hardware store at Phillip.

Region Media understands that an expression of interest for the Phillip site went to market before Christmas last year and that Home Timber and Hardware would not be renewing its lease due to a downturn in trade.

It is also understood that contracts have exchanged on the sale of the site, but it is not known who the new owner would be.

A spokesperson for Bunnings confirmed they had not purchased the site; however, some of the staff who worked at Home Timber and Hardware have been re-employed by Bunnings.

The site would also be attractive to developers as it is zoned to a height of four stories.

The property is owned by John McGrath Ford which operates the adjacent car dealership on the corner of Hindmarsh and Melrose Drive in Phillip.

Go and buy something

John think your history is off a little bit. The first Magnet Mart (according to Wiki) was QBN in 1985.

There was only ever a Paul’s at the Woden site until the owner decided to change name to Magnet Mart.

Staff there very helpful and friendly. Quicker than going to Bunnings

The other magnet marts were much bigger than Woden but it's the last one to go. Bunnings set up next door to Belconnen and Gungahlin Magnet Mart and people flocked to the the new stores though they weren't any better.

Jordan Lohse nooooooo what are you gunna do now 😭😭

Jen Kemp I am sure this will really upset you....

Ben Wilson it depends what goes there instead

Change of lifestyle. Not good!

What a pity - the 2016 sale to the bean counters was the start of the store's demise. Prior to that sale, the previous owners would employ ex-tradies at peak times as sales staff who also gave valuable advice. Post -2016 sales staff numbers plummeted and cash registers closed. No service=no sales. A great little business ruined.

Definitely an end of an era I came to Canberra in 1973 & lived in Torrens. I was one of the first residents in Kambah in 1974 & purchases for my new home were bought from Pauls.

Bad timing for them because in the next two years there will be hundreds on new home units completed in the town centre and there will be a huge demand for gap-filler and waterproof silicon to complete the units after they are occupied.

During work I’ve had to pop into here quickly a few times as I was on a job in the Woden area, every time I did they never had the basic item I was looking for. No shock here.

Great staff thanks for all the helpfully assistance

A sad loss of a very useful shop.

Obviously the people of woden dont mind driving to Fyshwick

Once upon a time a home from home

Georgia vindication for you but ☹️ for me

I remember when there were three hardware stores in Woden. 🤧😢

Kim Rumble-Kozjak - 23 minutes ago
Jacqleequack it was all good fun until the two hour wait in the cab line, in stilettos, without a jacket in -2 🥶❄️ View
Jeffrey Brown - 18 hours ago
Ahhhh those were the days. Standing in the queue and watching the odd brawl of dudes trying to prove their worth. Was normal... View
Property 21

Kimberley Lloyd - 1 hour ago
This is the story everywhere. Have you actually had a look at houses for sale at the moment. Do you have a look at the unimpr... View
SJ Killer - 8 hours ago
Luke Ashe those articles are totally non-related, different areas, different dates, different contexts, click bait, and one i... View
Kriso Hadskini - 9 hours ago
Speculators are buying property that should be for families. And if you are obscenely wealthy why would'nt you? 10% a year in... View
News 4

Tegan Gilchrist - 7 hours ago
Amy LD and the clothes!!! Swapped out all out white sheets for greys. Blazer ruined. I now fill up bottles of water from my p... View
Property 20

Ben Keaney - 10 hours ago
Also if they are not in the numbers that the anti-brumbies say, what do you think a maximum brumby population should be? Sure... View
Ben Keaney - 10 hours ago
Di exactly how do brumbies keep the fuel load down? Do they eat fine forest fuels such as sticks and leaves? Or Perhaps its t... View
Di Hunter - 13 hours ago
Jackie Hattingh it’s actually proven that they don’t and it is also proven that they are not in the great a numbers as th... View
News 7

Walter Burley Griffin Society - 21 hours ago
The sound of summer ... View
show more show less
*Results are based on activity within last 7 days

@The_RiotACT @The_RiotACT
Cavalry mascot Sarge is turning up the heat on his annual 10 km walk to raise $10,000 for Lifeline in Canberra. Find out how you can help https://t.co/CktjV9PbUV (10 hours ago)

@The_RiotACT @The_RiotACT
Hot in the City: Al Manoosh is serving up a Lebanese breakfast spread in Mawson https://t.co/NbUW7gTjh2 (12 hours ago)