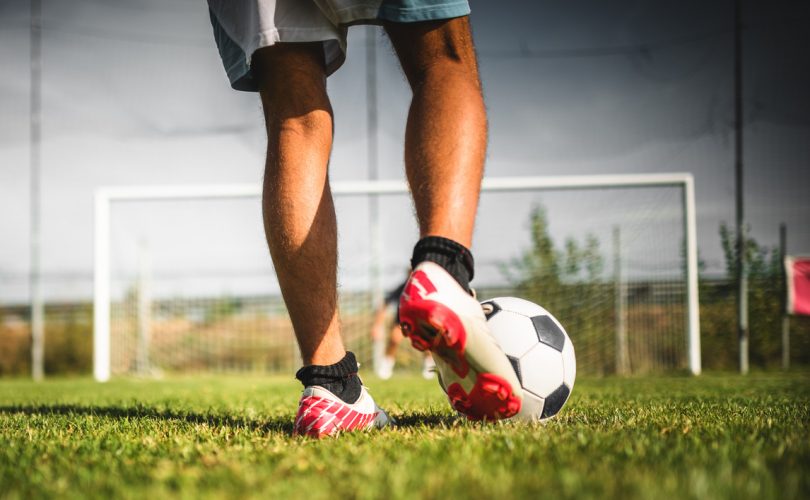 Capital Football’s chief Mark O’Neill is facing a backlash from within his own federation and from a growing number of disgruntled clubs across the ACT.

There are fears that ACT football could be isolated from the rest of the country and its A-League bid put at risk if Capital Football continues to hold out against proposed reforms to Football Federation Australia.

A FIFA-backed working group has proposed sweeping changes to Football Federation Australia including an expanded congress, governance reforms and a pathway for an independent A-League.

But Capital Football is one of four federations which have voiced their resistance to the reforms recommended by the FIFA-sanctioned Congress Review Working Group (CRWG).

Capital Football’s chief Mark O’Neill is facing a backlash from within his own federation and from a growing number of disgruntled clubs across the ACT.

The Territory’s nine NPL clubs and wider membership are asking for a ‘please explain’ from the Capital Football chief, and for him to clarify his decision to thwart the reform. O’Neill, according to his critics within the ACT, has not articulated his position to the local football community and is being pressed to clearly explain why he is not supporting the CRWG’s findings.

Here are the simple facts about the issue:

“Capital Football could very well find themselves isolated and that could have serious ramifications for football in the ACT,” he said.

“Mark O’Neill is isolated. He is hanging on by the skin of his teeth. He has not consulted with any of the clubs here in the ACT about this. There are some serious ramifications to Australian football if the reform does not go ahead.

“The nine National Premier League clubs do not endorse what Mark O’Neill is doing. He has gone rogue on this topic and he is going to isolate Canberra from the rest of the continent in regards to football. You can forget about the A-League bid. We won’t get anything unless he changes his position on the reforms.”

The nine clubs have banded together and have written an open letter to Mark O’Neill, obtained by The RiotACT, to try and get his attention and response. 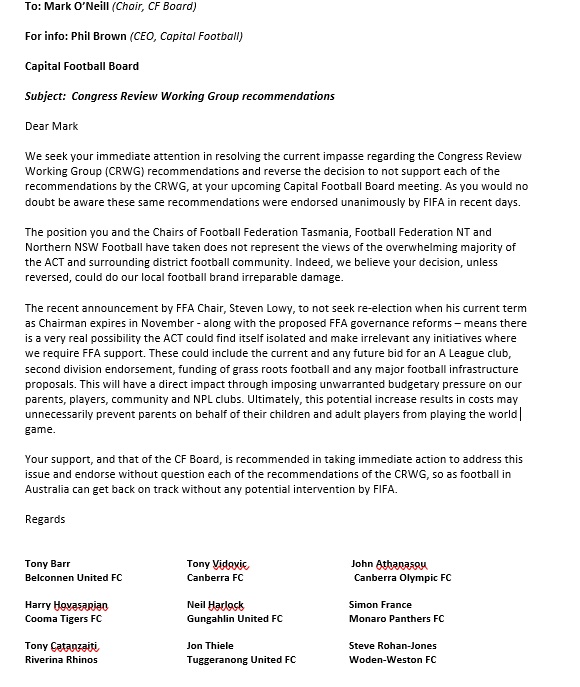 An open letter sent on the 28 August addressed to Mark O’Neill from the nine NPL club presidents.

Thiele believes the CRWG recommendations will still pass but if Capital Football stands by its decision to oppose the recommendations, it could find itself out in the cold.

“The two biggest football states in the country, NSW and Victoria, have endorsed it. What are we doing? O’Neill has not corresponded with any of the nine NPL clubs. He is refusing to engage with us. Several NPL club presidents have reached out and he has not responded,” Thiele said.

Presidents and board members from the nine NPL clubs will meet on Monday night (3 September) to figure out their course of action going forward.

It remains to be seen how long this standoff will ensue. Let’s hope, for the good of football, it ends soon.

Capital Football was approached but declined to comment at this time.

Anthony Beck - 24 minutes ago
Why can some training companies continue face to face training, and in a classroom environment, but transport training cannot... View
kenbehrens - 1 hour ago
Roy, I've always been concerned about the active type of exerciser. The runner, the cyclist etc and how that type of activity... View
Kari James - 1 hour ago
I would find this job incredibly difficult and stressful - great work team! View
News 22

Capital Retro - 28 minutes ago
Your comment is well founded because in the USA limitations of land use for these abominations is now being exceeded (see vid... View
Ellen Duggan - 5 hours ago
My only comment is that I live at Crookwell and I find them an eyesore....The landscape is ruined and I know they don't work... View
Business 16

@The_RiotACT @The_RiotACT
Dobinsons is on a roll and bringing their baked goodies to a street near you. Find you how you can get your fix to make lockdown a little sweeter https://t.co/z8IGWiEGyy (57 minutes ago)