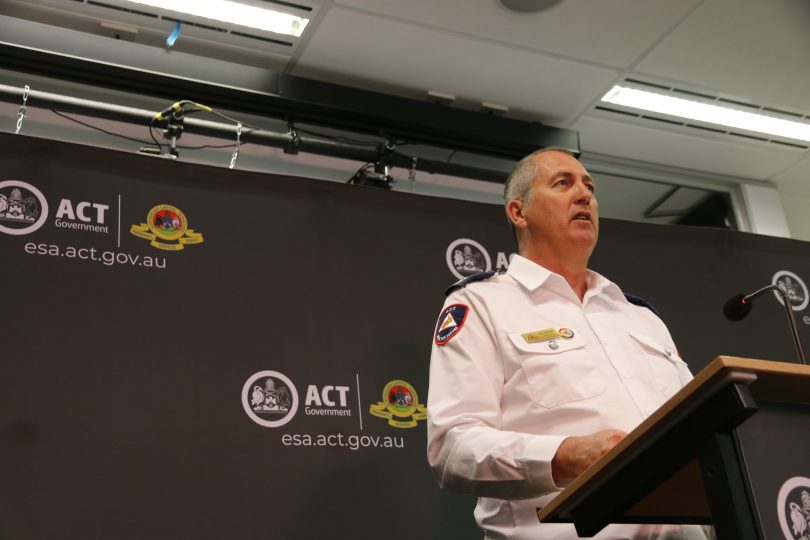 The habit must bring a smile to the avid Batman fan who, after 33 years in ACT emergency services including leading the ACT Rural Fire Service (RFS) through the recent bushfire season, has decided to hang up his cape.

“It is a financial decision,” Mr Murphy said at today’s announcement. “It is the right time. It is about me now.

“I am 53 years young and I have a long way ahead of me. There are a lot of projects that I want to go and do. There are a whole lot of dragon boat ideas that I have, and a lot of cycling ideas and I have shared them with the Minister [Mick Gentleman].” 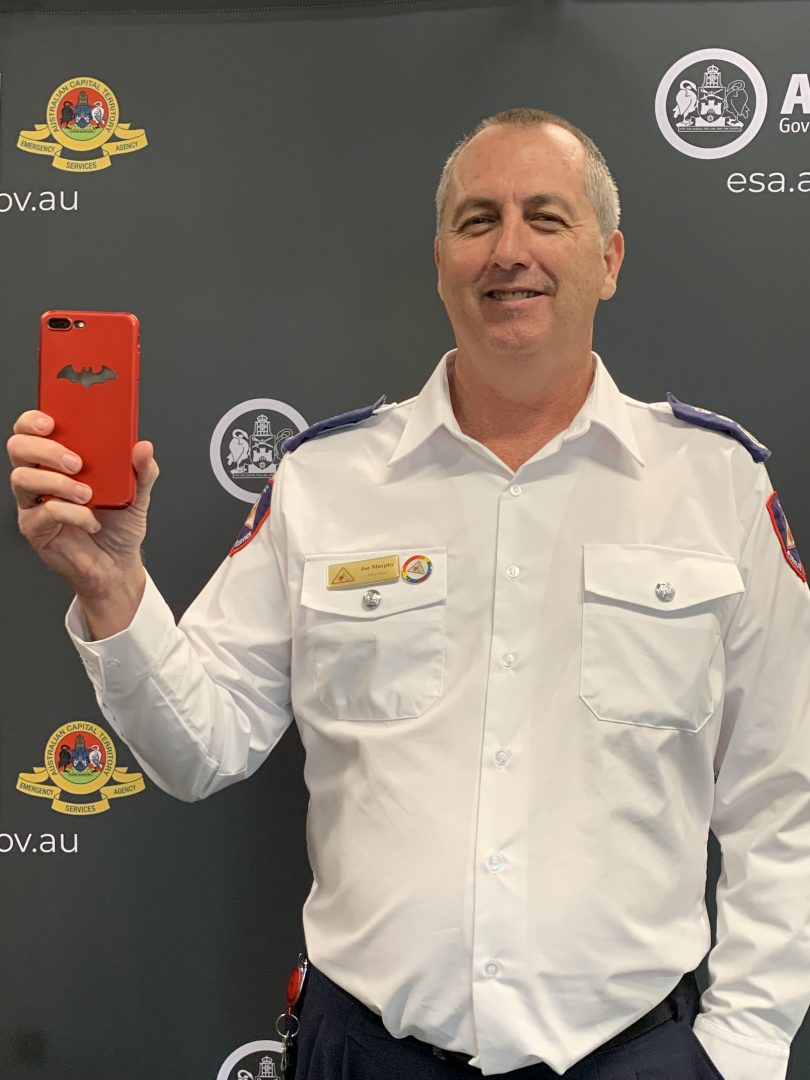 But even on the day that was supposed to be about him, the forthright and straight-talking Chief took the time to dedicate it to the volunteers and emergency services staff who worked tirelessly through the season to protect the ACT community.

“I want to point out that all frontline staff do a dangerous job. Fire is inherently dangerous so every frontline emergency service worker sees the best and the worst of the community every day,” he said.

“I think we should reflect on the fact that when the community is at their worst point, they are seeking our help and we are the rock in the middle of that turbulence and that is the role of every emergency service worker.

“Nothing is done individually. It is not about what I have done, it is about the team working together and getting things done.”

The ingrained sense of teamwork has come out of more than two decades of dragon boating, which a firefighting friend suggested to him when his partner was pregnant with his son.

Dedicating himself to his team – the Canberra Griffins – has only strengthened his focus on community, which included attending six town hall meetings over the last two months to reassure residents about what was being done to protect them from the fires. 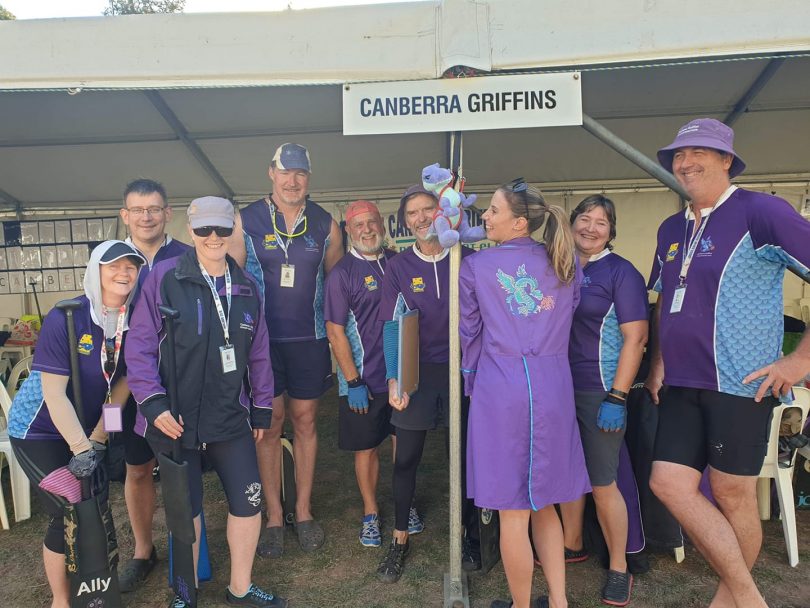 “Over the two meetings [at Lanyon Vikings] there were probably 1,000 people, and that was fantastic,” he said.

“Having the chance to talk to 1,000 people of the community, that is awesome. It was good fun – for all the wrong reasons – but it was good to talk face-to-face to people and I would like to think we had a real connection with the community.

“That one-on-one was what it was all about.”

ESA Commissioner Whelan has also lauded Mr Murphy for his connection not only with the community but with ESA staff personally.

“I could not have asked for a more warm and compelling colleague who supported me through my transition into this agency [three years ago],” she said.

“He advised me that he was thinking of retiring [last year] but he would stay by my side to support me through my first fire season as Commissioner and I will be forever in Joe’s debt for the support he has provided me.”

His focus on people and the community also came into focus through his inclusion initiatives, making it easier for people to feel welcomed in the emergency services community.

“We are all wearing these diversity and inclusion badges here in the ACT. That is Joe’s work,” Commissioner Whelan said. 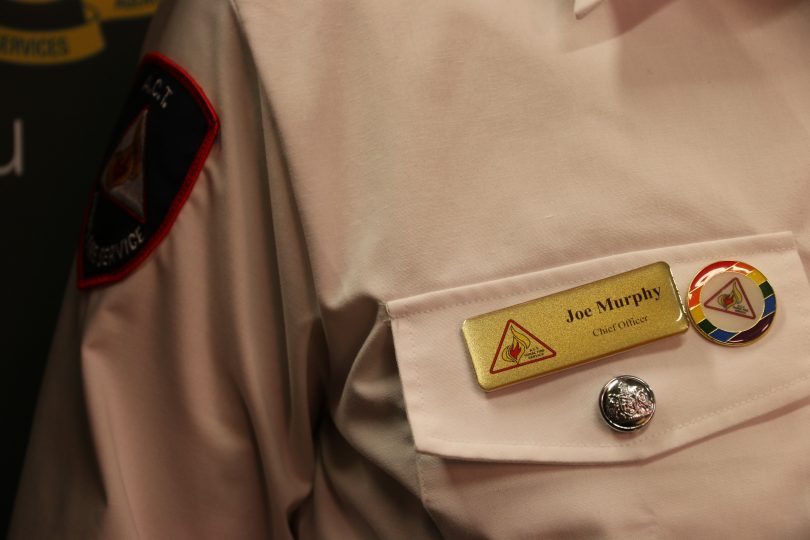 Joe Murphy has been a champion for community inclusion throughout his three-decade career in the emergency services. Photo: Dominic Giannini.

“Joe has worked tirelessly to make the emergency services accessible for all members of the community and is also making sure that we make ourselves accessible to the broader ACT community.

“This is really a reflection of the commitment he has made over the last 33 years.”

And for a man known for his stoicism over the last bushfire season, his emotional side was on display during his retirement announcement.

“I am a little bit emotional but I am looking forward now, so I have got a long time ahead of me. My old man is 89, so I am relying on the longevity of the genes, and I have plenty of plans ahead of me,” he laughed.

Thank you for your service to the community. Enjoy your retirement.

Well done. You should be proud of what you achieved

Sad to see him go, he did a great job during the recent emergencies

David Loft were do I write to 😅

Greyd'n Davis need a reference. I can scribble one out for you.

That would swing the job for me

Justin Evans - 2 hours ago
Lights, bells and even boom gates aren't going to stop someone if they aren't watching the road View
John MacCallum - 8 hours ago
All level crossing collisions are avoidable. It just takes people to drive appropriately and not be complacent. See and avoid... View
Scott Turnbull - 8 hours ago
Layla Barry Tragic as these accidents are, it is simply not practical to place lights and bells at every single level crossin... View
News 1

ChrisinTurner - 3 hours ago
More people would use the bus if it didn’t get stuck in the same traffic jams. A bus lane is needed urgently. View
News 11

Dean Carlson - 4 hours ago
Don’t let a noisy minority say they're talking on behalf of the town. This school is desperately needed and the proposed si... View
Kristy Norwood - 6 hours ago
I am 100% for the high school and it's location, as for the park it's government owned and they will do as they need, if they... View
savebungendorepark - 19 hours ago
We should be clear. This isn't about "us against them". Virtually everyone who's campaigning to save the Park supports a high... View
News 8

rationalobserver - 4 hours ago
Shooting is is the most humane and target-specific means of rabbit control available. It can be done quite safely inside sett... View
Stephen Saunders - 6 hours ago
In O'Connor, the worst infestation is along the Centenary Trail, at Bruce and O'Connor Ridges plus adjoining Nobby's Farm. Th... View
Lifestyle 1

Juliet Lautenbach - 18 hours ago
Meryl McKerrow I’m actually agreeing with you regarding those who cause the crashes. What I’m saying is that the slower s... View
Pete Notso Fatso - 20 hours ago
Once upon a time cars were sold on things like “power assisted disc brakes” or “RTS”. Nowadays it’s Apple CarPlay a... View
Steve Jones - 20 hours ago
Richard Watts that was on a straight bit of road........ View
Lifestyle 1

@The_RiotACT @The_RiotACT
Researchers have discovered that the waters around popular holiday destination Narooma are a troubling barometer of climate change https://t.co/vbHjduTT7O (16 minutes ago)