Pacific Islanders share the importance of kava to their culture 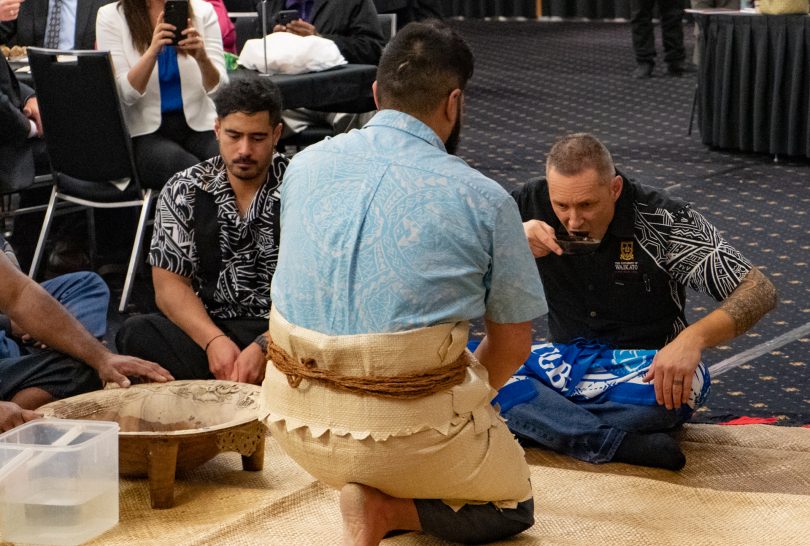 Kava is the cornerstone of Pacific Islander tradition and, while an acquired taste, helps connect Islander-Canberrans with their cultural identity.

But the plant root, which is mixed with water to create the drink, is hard to access in Australia due to a restriction on imports.

Travellers can only bring 4kg of kava into Australia on their persons, and it cannot be imported.

For Islander-Australians, not having access to kava in Australia has begun to hurt their cultural identity and forced some to the black market for the root that is commonly used in traditional ceremonies such as births, deaths and marriages.

Furthermore, this has been exacerbated by the COVID-19 pandemic while travel is restricted.

Tupz Takiari, a local advocate who has been making and drinking kava for the past two decades, said the drink is a symbol of the land he comes from.

“When you drink kava, it is like you are drinking part of the land and part of your culture,” he says. 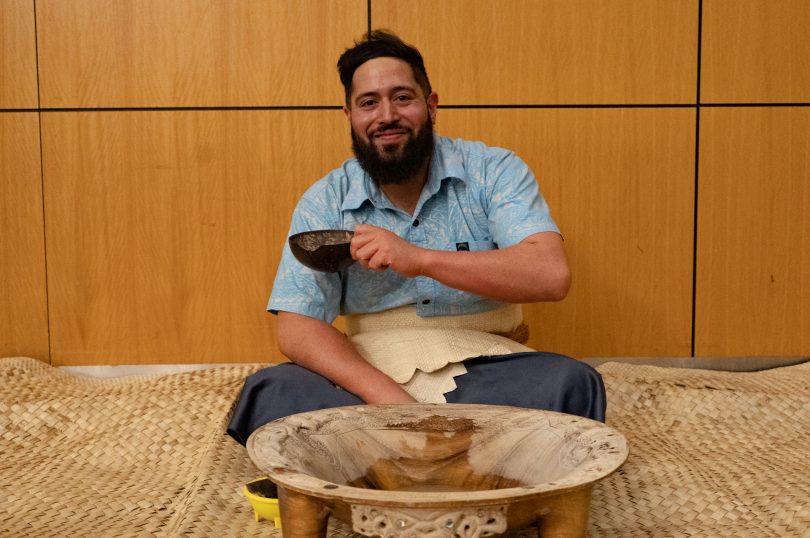 Tupz Takiari has been drinking kava with his community for 20 years. Photo: Dominic Giannini.

“Kava is essentially one of the cornerstones of Pacific culture. It is part of everything we do from weddings to funerals to celebrations, even installing chiefs or kings.”

There is a significant social element to kava for Pacific Islanders. Even though it is a ceremonial drink, it is often made for farewells or housewarmings and to bring people together to foster a sense of connection.

But while friends and ceremonies may change, the way kava goes down doesn’t.

“To be honest, I have drunk kava for nearly 20 years now and it still tastes the same,” laughs Tupz. “It does not get any better. It is an acquired taste, but it is not as bad as people think it is.”

Tupz was given the honour of presenting ACT Senator and Minister for International Development and the Pacific, Zed Seselja, with a bowl of kava during a recent forum between government officials and community members.

Senator Seselja reiterated that the Federal Government is committed to legalising the commercial import of kava and spoke of its importance to the Pacific Islander community. 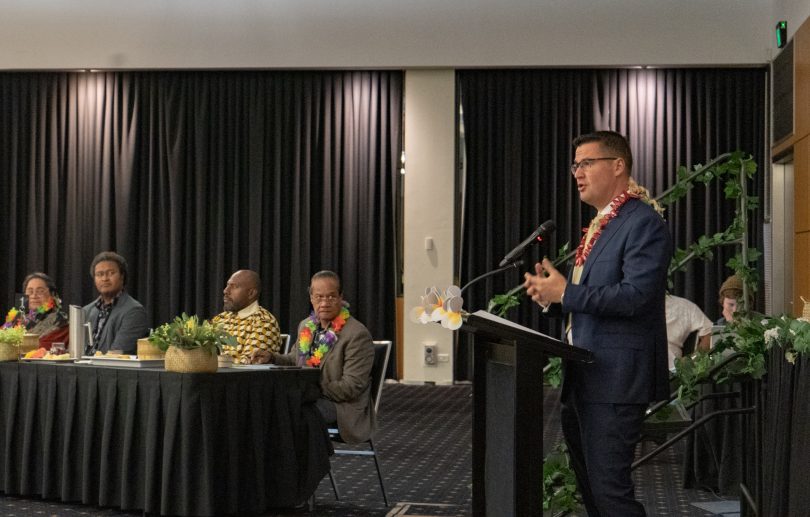 A 2019 pilot program increased the amount of kava that can be brought into Australia from 2kg to 4kg, but the second phase of the pilot was delayed due to the COVID-19 pandemic.

The allowance for the commercial import of kava will come into place by the end of 2021.

Dr Apo Aporosa, who is based at Te Huataki Waiora School of Health, in New Zealand, says Pacific Islander traditions have been impacted during the COVID-19 pandemic when kava has not been available.

Dr Aporosa is also dismayed at the current restrictions, saying that because the drink is not alcohol, it is a lot less harmful than other substances that are readily available in Australia, while providing some health benefits for drinkers. 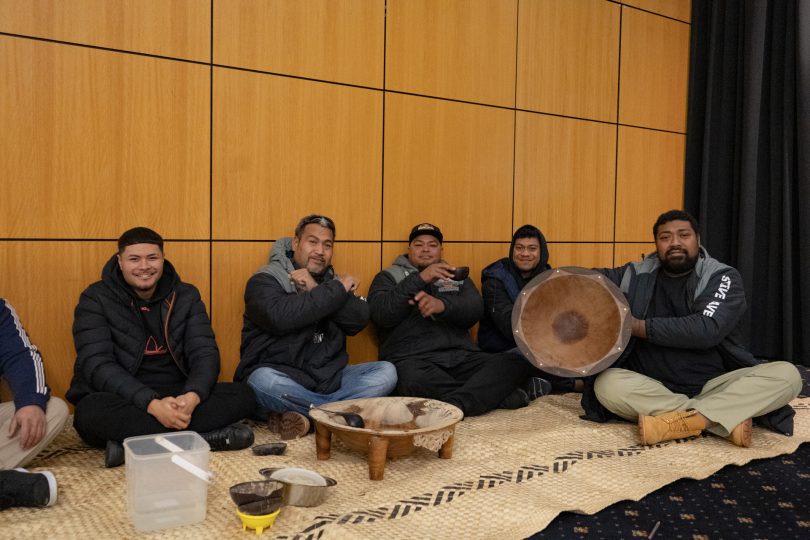 “It does not affect you in any way like alcohol or marijuana.

“A lot of people ask, ‘Why do you drink it?’ The reality is it’s really important to my culture. It is the way we connect and interact when we drink kava that is really good for mental health.

“It is something we do as a community, whether it is with one other or 500 others.”

Kava is sometimes used as a treatment for insomnia, stress and anxiety.

However, excessive consumption of kava can lead to drowsiness, nausea and loss of muscle control, while there is also a range of long-term effects.

And our Peruvian culture chewing coca leaves is also important. Like to see that change also! 😂🤪😂

“Kava is the cornerstone of Pacific Islander tradition and, while an acquired taste, helps connect Islander-Canberrans with their cultural identity.”

I call BS. Every person I see of Pacific Islander decent have numerous cultural tattoos and attend church every Sunday (apparently a white dude that died at Easter and his Dad is a major part of their culture).

However, I’ll play along. I would allow a period of 2 years where kava was allowed to be imported. If Pacific lslander membership to OMCG’s and other violence related crime did not decline or end in that time, then Kava becomes illegal.

Bailey Boljkovac ahead of the game 😂😂

Kava is a lot safer than benzodiazepines like Valium. Talk of long term side effects is really not true. I can't understand why importing it should be an issue.

Adam Butt just let them bring the Kava in….

Geoffrey Bell - 11 minutes ago
Julie Mylchreest The tenant union be out of a job If they did anything to improve the renter lot. View
Eric Anthony Lucas - 54 minutes ago
Why would anyone want to be a landlord? If you think it is hard to find rental accomodation now, proposals like this will onl... View
Zach Byrnes - 58 minutes ago
Nicholas Nagel thoughts? 🤔... View
Community 11

Perry Alopex - 2 hours ago
Nice! I can only imagine that trying to settle in Canberra would be pretty rough. It's got one of the highest costs for livin... View
Peter Manna - 2 hours ago
They will think this is paradise lol View
Amie Doolan - 2 hours ago
Where have these 50 people been housed? Are there local families taking them in, are they living in hotels or have they been... View
News 48

Aaron Nicoli - 3 hours ago
It’s also so much safer now… 60km/h jam brakes on for the camera, accelerate back out to 60… It’s achieved nothing fo... View
Phil Hogan - 4 hours ago
Got to pay for the tram 🙄 View
News 3

Behind the scenes of a pandemic: How the Chief Health Officer runs our COVID-19 response

@The_RiotACT @The_RiotACT
Despite having it's #funding withdrawn in June 2021 and subsequently closing down, ACT Recovery College has received a prestigious Australasian #award among unwavering #community support https://t.co/Ptc8c8L0GE (33 minutes ago)

@The_RiotACT @The_RiotACT
ACT Health has reported 17 new cases of COVID-19. There are 17 people in hospital with COVID, including nine in intensive care https://t.co/1Bc2I9mRsp (40 minutes ago)