The number of units and apartments being approved has collapsed. Photo: File.

The ACT’s building industry has called on the ACT Government to do more to get construction projects up and running after unit and apartment approvals fell to their lowest level in eight years.

The latest building approval figures from the Australian Bureau of Statistics reveal only nine unit and apartment dwellings were approved in May, the lowest monthly result since 2012.

With 122 houses approved, this means only 131 dwellings were given the green light compared with a total of 907 in April, including 812 units and apartments.

The value of dwellings approved in the ACT fell from $246 million in April to just $47 million in May.

Master Builders ACT CEO Michael Hopkins said unit and apartment approvals had declined 98.9 per cent since April and represented a 23.5 per cent decline since the same quarter last year.

“These statistics will be sobering reading for the close to 20,000 people working in the ACT construction industry as many are looking for more support from the ACT Government to provide a forward pipeline of work to secure their continued employment,” he said.

Mr Hopkins said the government’s self-interest should motivate it to speed up development approvals.

“While the sharp decline in building approvals will impact construction jobs, it will also impact future ACT Government revenue,” he said.

“Around 50 per cent of the Territory’s taxes and charges come from the property and construction industry so a decline in unit and apartment approvals means fewer jobs for Canberra’s construction sector and less revenue for the ACT Government.”

Mr Hopkins said hundreds of dwellings were stuck in the planning system awaiting a policy change or development approval from the ACT Government.

”It is now critical that the ACT Government urgently approve these projects and support jobs and future revenue for the Territory,” he said.

Industry figures have been warning of construction falling off a cliff for some time and the situation on the ground is starting to show in the data.

Chief Minister Andrew Barr says extra staff have been deployed to get through the backlog of process development applications and the government will be spending more on public and community housing.

The Homebuilder program announced by the Commonwealth is also designed to boost housing construction and renovation projects.

Nationally, the number of dwellings approved fell 16.4 per cent in May, in seasonally adjusted terms, according to the ABS.

ABS Director of Construction Statistics Daniel Rossi said the decline was driven by private sector apartments and units, which fell 34.9 per cent in seasonally adjusted terms.

”The number of dwellings approved in apartment buildings fell sharply, to an 11-year low,” he said. “Meanwhile, private sector houses fell modestly in May, by 4.4 per cent.”

He said COVID-19 was not to blame for the decline.

“While minor effects of COVID-19 are apparent in the headline Building Approvals results, the fall in apartment approvals was broadly expected prior to the COVID-19 pandemic,” he said.

We don’t need more of a rush on DA’s. We already have massive apartment quality issues.

Maybe after the high numbers for 8 plus years, there isn’t the need or demand for more apartments?

Build more social housing to address real housing need and to stimulate the economy. Funds can be diverted from non essential projects such as the light rail extension.

Too right. Some new government housing in the middle ring of suburbs in Canberra (and on Rapid Bus routes) would help with the Salt and Pepper approach that used to be in vogue.

The proportion of dwellings that are Government housing in Canberra has dropped dramatically over the last few decades.

I still can’t believe that the thousands of government housing dwellings sold off in Red Hill, Griffith and Reid weren’t replaced in those suburbs. Just sent out to Gungahlin, Molonglo and Tuggeranong.

Let’s help the Construction sector and struggling Canberrans at the same time. 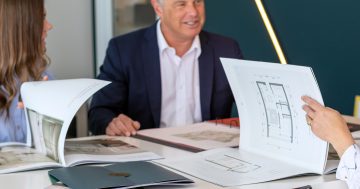