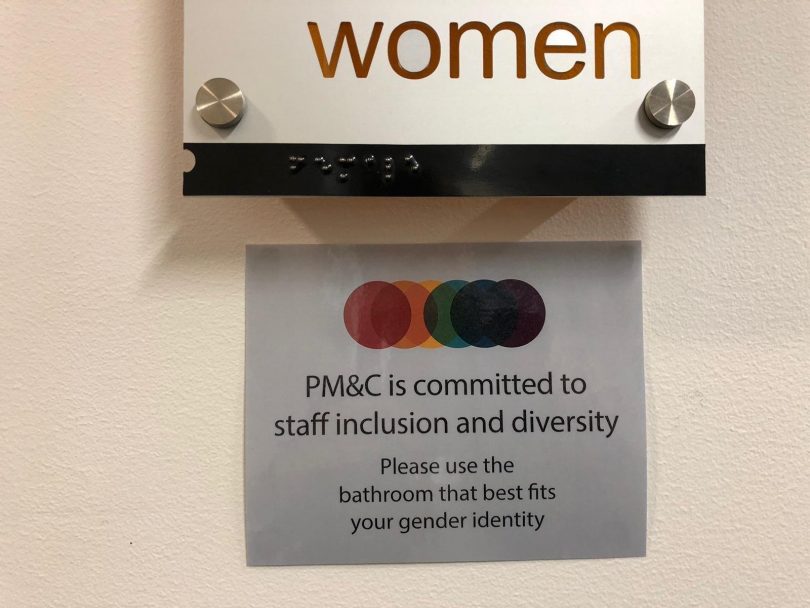 The sign, which has since been removed, outside a women’s bathroom at the Barton offices of the Prime Minister and Cabinet. Photo: Chris Uhlmann, Twitter.

It was described as “over the top” and “unnecessary” but for LGBTIQ+ Canberrans, this small steel sign was a signal of safety and inclusion.

Last week, a gender-inclusive sign outside a woman’s bathroom at the Prime Minister and Cabinet’s offices in Canberra made news headlines after Prime Minister Scott Morrison promised to “sort out” the “ridiculous” sign.

The sign, which stated that the PM&C is committed to staff inclusion and diversity, and encouraged staff to use the bathroom that “best fits your gender identity”, has since been quietly removed by the Department.

The words used by the Prime Minister to describe the seemingly inoffensive gender-neutral toilet sign is perhaps reflective of his own ideologies, but Joel Radcliffe is more concerned about the potential harm that the Prime Minister’s words could cause LGBTIQ+ people across Australia.

Mr Radcliffe is Acting Executive Director of A Gender Agenda, a Canberra-based organisation committed to progressing the rights of intersex, trans, and gender diverse people. He described Scott Morrison’s words as “deeply disappointing” but “not surprising given the Prime Minister’s track record on these issues”.

Mr Radcliffe said the PM’s comments proved that he had no understanding of what it is like accessing bathrooms for people who are trans or gender diverse.

“We hear stories from our community members all the time about being policed in toilets and being asked to leave,” he said. “There is some really harmful rhetoric out there at the moment that trans people pose a threat by going to the toilet.

“Bathrooms can be a very unsafe place for some people and the decision on what toilet to use can be a really difficult one to make. Trans people are often exposed to a great deal of vilification and harassment in toilets so anything we can do to try and address that is really important.”

What was most disappointing for Mr Radcliffe was the fact that the Department of Prime Minister and Cabinet had a reputation for supporting their LGBTIQ+ employees, as demonstrated by the signs.

But he hopes that Mr Morrison’s “harmful comments” may at least provide an opportunity for other businesses and government departments to discuss the benefits of gender-inclusive bathrooms.

“It is a shame that the executives in the Prime Minister and Cabinet’s offices seem to have completely overridden the good work that has led to the signs being put there in the first place,” he said. “We are seeing more organisations take steps to create gender-neutral or shared toilet arrangements.

“I hope this does not deter them.”

Good move. Someone needs to put boundaries around this creeping cancer that is political correctness.

I don’t want men using the women’s toilets in my workplace.

A person whose gender identity is female shouldn’t be a problem for you then.

There are only two chromosomes; X and Y. How hard can it be?

He ‘understands’ perfectly well. He just couldn’t give a rat’s. Over and over, he’s made it clear that any group he considers weak, or unnecessary to his purposes, is subject to arbitrary attack for political gain, any time it suits him. Uhlmann knew perfectly well that he was dangling pure catnip.

There are two signs in the image supplied. Which one was removed? The one that says “Women” should have been the one removed too to satisfy the demands of the people that are banging on about inclusiveness.

Both signs to be replaced with one sign “Toilet”.