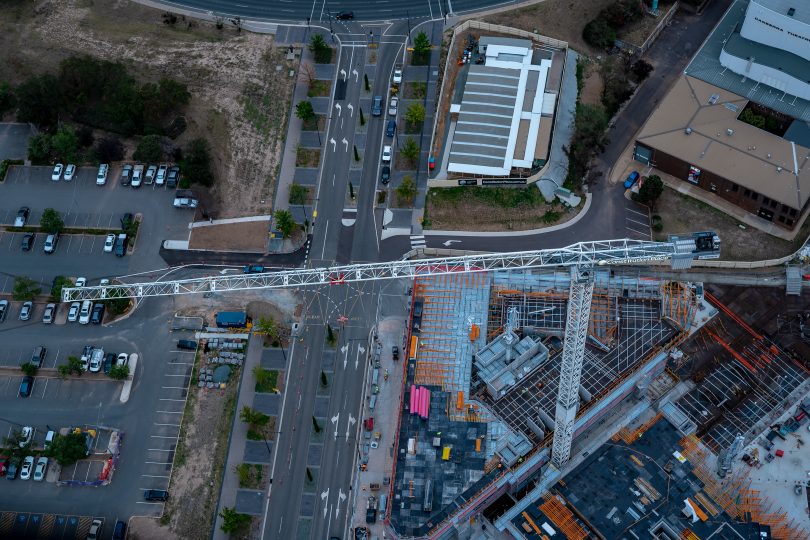 Building defects remains a hot issue and some believe licences for developers will lead to better outcomes. Photo: George Tsotsos.

The ACT Government and the property industry are on a collision course over the possible introduction of licences for developers in the wake of last weekend’s ACT Labor conference.

The conference adopted a motion calling for a licensing regime and the Government said it was considering such a proposal.

The motion called for a number of requirements to be imposed on developers, aimed at addressing the continuing issue of building defects and some builders and developers avoiding their responsibilities to rectify them, but also payments to contractors.

These include developers being able to demonstrate the financial and operational capacity to complete jobs and address any building defects that may arise, as well as not engaging in ‘phoenix’ activity or unfair commercial practices.

Developers would also not be able to impose time frames on building contractors that could lead to unsafe work practices, breaches of Commonwealth or Territory law or building quality outcomes.

They would have to establish a project trust account where funds, including retention payments, were held in trust for head contractors and subcontractors until payments are due, and reveal their sources of finance.

They would also have to agree to not engage in deceptive or misleading marketing when promoting a development to the public.

Minister for Building Quality Improvement Gordon Ramsay said the Government was in the early stages of examining options for a proposed developer licencing scheme in the ACT.

But executive director of the ACT Property Council Adina Cirson said a licensing regime was unlikely to prevent building defects and there were big questions around governance and how compliance would be enforced.

She said that last week federal, state and territory ministers agreed to take a national approach to building regulation and standards, and implementing the recommendations of the Shergold Weir report.

Ms Cirson believes that individual jurisdictions should not be going it alone on measures such as developer licences.

“It’s not going to be the panacea for fixing defects in buildings. It’s better if we work at a national level to make sure that the building code, the regulations, insurance schemes, certification schemes, building materials, all of those issues, are done from a national point of view,” she said.

The licensing issue comes amid renewed Government warnings to industry about building practices and defects.

“We will continue our crackdown on dodgy operators in the construction sector with increased levels of enforcement and compliance activity on building sites around the Territory,” Mr Ramsay said.

“Industry has been clearly put on notice that the Government will not tolerate building work that was not of a high standard – and neither will the community. This was also reflected at the recent ACT Labor conference.”

This is an extremely serious issue which unfortunately is not restricted to just developers. As a builder with 30 years experience in the ACT I have worked on projects for Commonwealth Government, ACT Government and the private sector with ridiculously unrealistic deadlines. As builders we have to manage the time, cost, quality and OH&S for a project yet when we are presented with deadlines that simply can’t be met without working our staff and subbies 12+ hours a day, 7 days a week we are still expected to achieve the same quality outcomes. Something definitely needs to be done. We all know that developments aren’t cheap however making the builder responsible by tightening deadlines to reduce holding and development costs is not the answer.

This needs to be Australia wide not just ACT. We have had an Australia wide Uniform Building Code of Australia for decades BUT if I want to build your house I need to have a builders licence BUT anybody can currently build a high rise residential/commercial development. It's been an absolutely joke for decades and all States snd Territories have been aware and done nothing.

Hi Barry, I believe your comments or understanding may come from another state, I.e. NSW, in the ACT in order to build a high rise or commercial development you need to have the highest level of Builder’s Licence. Yet we can go over the border to NSW and do whatever we like with no restrictions.

John Wojcicka . Hi John. Thank you for the correction. Your right, I'm relatively new to Canberra. My expererience (generally poor) was based as part of an Owners Corp in NSW.

It’s hard to have confidence in the industry when developers explicitly forbid buyer inspections during construction and won’t identify licensed tradies involved in construction or their insurers.

Well, of course the Property Council would be against it. Whose interests are they trying to protect?

Phil Hopkins - 49 seconds ago
Craig Rogerson And they already get their voting from x from Reality TV Shows! View
Craig Rogerson - 11 minutes ago
Of course the Greens would love this . They would be their biggest supporters . Straight out of the education system that is... View
デ スティーブ - 24 minutes ago
Need a bill to cap the legal age of voting to 79. Why should 80+ year old vote on the future for teenagers? Most 80+ year old... View
Opinion 78

Natalia Komarova - 15 minutes ago
When my friend lost her husband she said to some extend she lost her social circle as well. While she would catch up with her... View
Patrise Dowling - 1 hour ago
Nah. Get a dog. Demand free love. View
Michael Strand - 2 hours ago
So when she asks if she needs to lower her standards, what does that mean? Maybe looking at a guy is not not 6ft tall, or a t... View
Food & Wine 9

Chris Thomson - 1 hour ago
Wayne Britten got a hotline direct to the manager now lol View
Wayne Britten - 2 hours ago
Chris Thomson sounds like you rung that number a few times mate View
Sharron Baig - 3 hours ago
So what is it you's will actually go out for, when you's are called?????? View
News 72

ACT residents will soon be required to self-submit a report online when they are victims of certain crimes, including house...
News 64

Two reports this week have highlighted the growing housing divide in the ACT, in the rental market, and between renters...
News 28

@the_riotact @The_RiotACT
Looking for something to do in #Canberra this week? From #Christmas markets to Korean #films, here are 10 things to do in the capital https://t.co/FGRP1gEBLz (54 minutes ago)

@the_riotact @The_RiotACT
Virgin is restarting its Canberra-Sydney service using Link Airways planes, with up to nine flights per weekday https://t.co/QGcgoaSMTa (58 minutes ago)