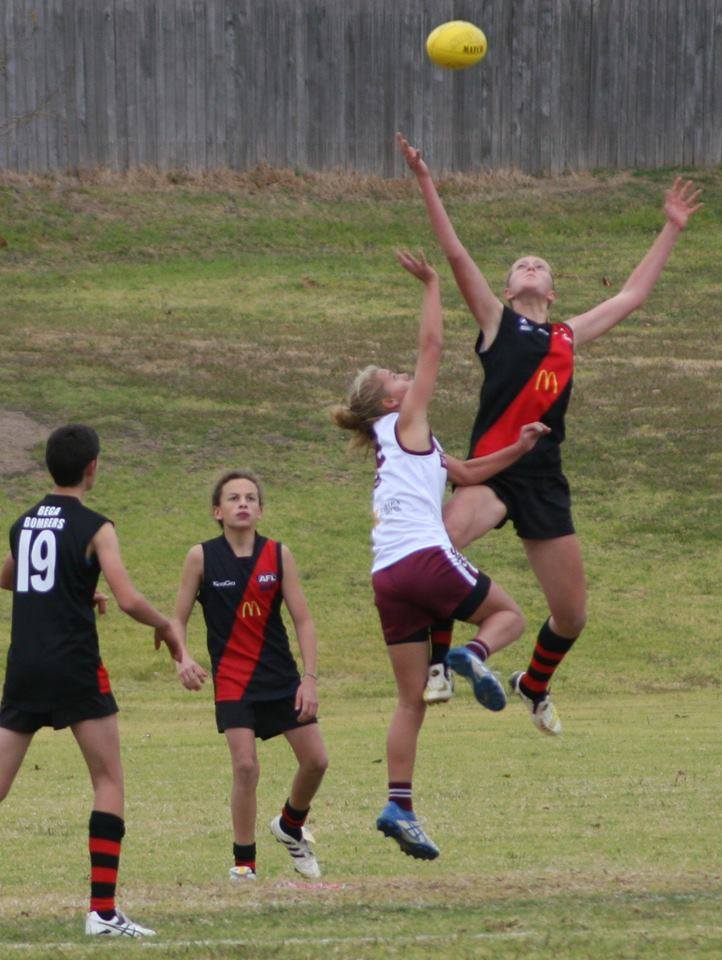 A new recruit to AFL has been selected as part of an elite group of young athletes to train under the South East Sports Academy.

Amelie Gautier from the Bega Bombers had never kicked a football until this year, but she will now complete 20 weeks of training backed by the AFL Female Development Program.

It was Amelie’s athleticism and potential for improvement that caught the selectors’ attention.

She’ll join a group of 23 young women from around southern NSW for weekly training sessions centred on Canberra. The first was held last weekend in Jindabyne.

Other locals selected for the squad include:

Despite her inexperience in the game, Amelie played a leading role in the ruck where her strength and agility proved more than a match for many of her male and female opponents.

While clearly focusing on the skills of AFL, the academy program takes a holistic approach to athletic development and includes the lifestyle tips necessary to see a young athlete advance to the elite level.

Bomber’s president, Stephen Nicol says he is looking forward to seeing the enthusiasm Amelie has brought to the Bombers go further afield.

“She’s already demonstrated that she’s a leader among our young players and I can see her passing on the valuable lessons she’ll pick up from the top line coaches at the Academy,” he says.

“She is not only a fine athlete but a fine young lady.

“The club’s primary focus is on developing its junior players and increasingly girls and young women are being attracted to the Bombers.

“We’re very fortunate in that we have a group of mature women who are excellent role models and mentors and we expect Amelie will become a valuable member of this group and a great ambassador for our club and game.

“We’re very lucky to have her as a member and we’re delighted at the opportunity she’s been given,” Stephen says.