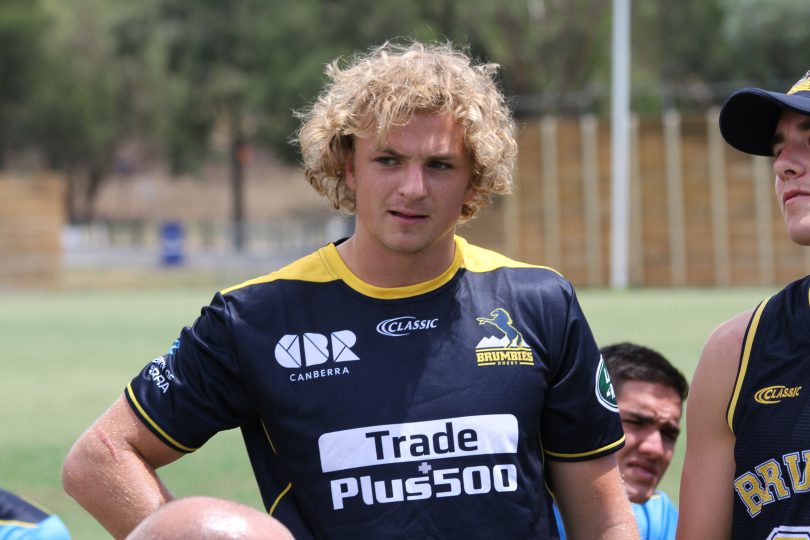 Joe Powell said the home side were confident their season wasn’t over even though everyone has written them off. Photo: Supplied by Brumbies Rugby.

The Brumbies haven’t given up hope of playing finals rugby this year despite sitting fourth in the Australian conference and believe they can turn their season around against the Melbourne Rebels on Saturday night.

The Brumbies’ season has been underwhelming after winning just three of their nine games and it could be game over for them if they lose to the Rebels for the second time this season.

With their finals chances hanging by a thread, scrumhalf Joe Powell said the home side were confident their season wasn’t over even though everyone has written them off.

“This season isn’t over for us, we just got to approach it one game at a time,” Powell said on Tuesday afternoon (8 May).

“I think if we put in a good performance, the result will take care of itself this weekend.

“I think everyone has written us off and we haven’t put ourselves in a good position but I think we play our best footy when we are under pressure and hopefully we will get ourselves out of it.”

The Brumbies have their backs against the wall and are trying to avoid three straight losses at home for the first time since 2011. The Wallaby representative said the Brumbies have to get rid of the simple mistakes if they are going to turn their season around.

“As much as everyone says it – it is just little things,” he said. “The attitude is there but we get to stages in games where we are talking about building pressure but then we release it due to little errors, individual errors, team errors.

“This week we have spoken about getting the ball to space. The Rebels provide space around the field with how they defend and so just have to make sure we don’t let them in for any easy tries.”

The 24-year-old said the team felt fresh coming off the bye and was ready to get their season back on track after their break.

“I think we needed a bit of a break. The last couple of weeks haven’t gone the way we wanted to so it was good to get away from footy,” Powell said.

“Everyone is feeling refreshed and happy to be playing Rebels this weekend and hopefully we can turn our season around.”

Brumbies vs Rebels at GIO Stadium, Saturday 7:45 pm. But your tickets from Ticketek.