Seven things to do around Canberra this weekend (9–11 November) 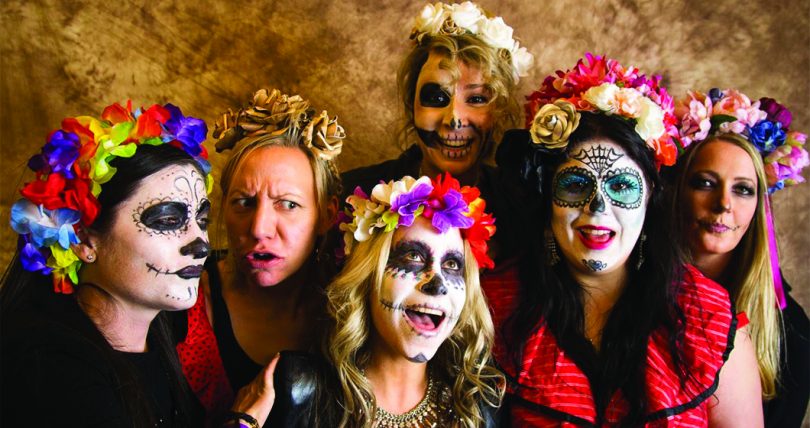 Face painting will be a popular feature at this year’s Day of the Dead Fiesta on Saturday. File photo.

It is a weekend of history and festivals. The centenary of the Armistice of the First World War falls this Sunday and the War Memorial is holding a number of events to commemorate this occasion. It is also the anniversary of the Whitlam dismissal and Old Parliament House is running its Dismissed Tour, taking you to the rooms, corridors and places where significant events that led up to the dismissal occurred. The Design Canberra Festival starts this weekend and the SpringOut festival continues. Finally, celebrate all things Latin American at the Day of the Dead Fiesta this Saturday.

Where: Various Venues
When: 2–11 pm
DESIGN Canberra is a festival that celebrates the designed city that is the nation’s capital. It runs until 25 November and there are over 100 events on the program including exhibitions, talks, tours, markets, collaborations and open artist studios and homes. Most events are free! Each week of the festival will feature a theme —this week’s theme is Canberra, an international city of design. The Festival’s Opening Party is on from 8 pm Saturday at the Monaro Mall. There will be experimental lighting design, an auction of contemporary studio-produced design, as well as music, local wines, craft beer, cocktails and more. Tickets are $20, book here. Other highlights this weekend include architect and artist, James Carpenter, light artist Niko Dimitrijevic, glass artist Harriet Schwarzrock and multi-disciplinary artist and lighting designer, Matt Adey on Aspen Island discussing light as a sculpture at Friday Night Lights. The Pop Inn bar will also be there with food and drinks. Tickets are $10, book here. And take the opportunity this Sunday to visit well-designed living rooms in the Inner South. Check out the Festival’s full program of events here—there is heaps on.

Where: The Street Theatre
When: Friday & Saturday 8 pm
Local director and playwright, David Atfield has a new play on at The Street Theatre this weekend – Exclusion. This play examines politics in a post-marriage equality world, and asks how welcome are LGBTIQ people now in the corridors of power? As a debate rages over a proposed education program to teach children about sexuality, two male federal ministers contend to become Prime Minister. But they both have secret lives that threaten to destroy their careers. When a handsome young staffer enters the scene, their worlds descend into a whirlpool of hypocrisy, blackmail, deception and sexual intrigue. Tickets are $49 for adult, $45 for concession, $35 for student and $30 for under 30s, book here.

Day of the Dead Fiesta

Where: Ainslie Arts Centre
When: 2–11 pm
Day of the Dead Fiesta or Dia De Muertos is an annual celebration of Latin American music, dance, food and art. Hosted by local band Los Chavos, the event is in its 7th year and will feature live local and interstate bands and cultural performances, a piñata for kids, a traditional altar—orfenda—built by the local Mexican community, and of course, face painting. Mexican performer, Karina Salgado will MC the event and will be performing throughout the night. Eat pan de muertos and mark the Day of the Dead by enjoying the best in life. Tickets are $35 for adults, $15 for kids aged 5–15 (kids 5 and under are free) and $85 for a family (2 adults & 2 kids). Book here. Then, party on into the night at the After Party at Smith’s Alternative until 3 am. Tickets are $10, book here.

Where: Cook Shops
When: 2–7 pm
The suburb of Cook turns 50 this year and The Cook Grocer is hosting a twilight market to celebrate this Saturday. The market will feature local producers, a kids’ zone, music and community entertainment, a time capsule competition, art/historical displays, a zone for makers and a zone for relaxing. Entry will cost a gold coin donation to charity.

Where: Australian War Memorial
When: 9 am–5 pm
The War Memorial is currently commemorating the centenary of the Armistice that ended the First World War and these commemorations culminate with a program of events this Sunday. See the display of 62,000 handcrafted red poppies on the Memorial’s grounds. Each poppy has been created by a volunteer, as part of the 5,000 Poppies Project and represents an Australian life lost in the First World War. Night time lighting enables you to visit the display until 10 pm each day. Then on Saturday night, a beam of light will be projected from the Memorial’s parapet to Parliament House. On Sunday, the War Memorial will host the National Remembrance Ceremony between 10:30 am–12 pm which will include a formal wreath-laying by dignitaries and a commemorative address. Bring a chair or rug to view the proceedings from outside the ticketed seating area on one of the large screens located on the Memorial grounds. Then finish the day by attending the Last Post Ceremony which will feature the eulogy for the Unknown Australian Solider first recited by then Prime Minster, Paul Keating in 1993.

Where: Old Parliament House
When: 2–3 pm
Travel back in time this Sunday to 1975 at Old Parliament House when changing a prime minister was a political crisis rather than a reminder to change the batteries in your smoke alarms. The Museum of Australian Democracy is running an interactive tour of the events surrounding the dismissal of Gough Whitlam’s Labor Government. The tour will take you to the corridors, offices and chambers of Old Parliament House where the events leading up to the dismissal occurred. Tickets are $8, book here.
Tags ainslie arts centre Australian war memorial Celebrate Cook Day of the Dead Fiesta DESIGN Canberra museum of australian democracy smiths alternative bookstore SpringOUT Fesitval The Cook Grocer the street theatre