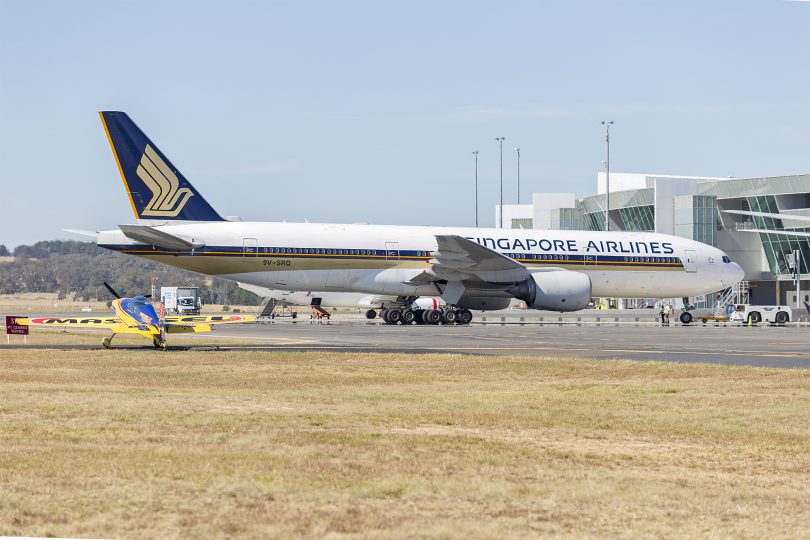 Singapore Airlines has pulled the plug on its Canberra service as part of a global downsizing of operations due to the COVID-19 pandemic, and may not return even if international travel restrictions ease.

The Canberra service began three-and-a-half years ago and originally included Wellington. That service was switched to Melbourne in 2018 but the link to the New Zealand capital has also been cut.

The airline’s Regional Vice President for South West Pacific, Philip Goh, said that the decision to permanently suspend both services to the Australian and New Zealand capitals was an extremely difficult one ”considering the hard work put in with our partners over the past few years to build both destinations into successful operations”.

“But it is necessary as we foresee travel demand to remain stunted for a long period of time. Australia and New Zealand remain key markets for the SIA group and we remain firmly committed to ensuring both countries remain connected through our Singapore Hub,” he said.

”We are very proud of all that we achieved in Canberra over the past three and a half years, in particular to have been the first international airline to operate regularly scheduled services from Australia’s capital.”

Mr Goh said the group would review its plans going forward, and make adjustments to the network to meet changing demand.

The decision is another blow to Canberra Airport, already reeling from the impacts of domestic border closures.

Head of Aviation Michael Thomson said the aviation industry had been decimated by the COVID-19 pandemic and the announcement from Singapore Airlines to continue the suspension of the service came as no great surprise.

”We’ve enjoyed a successful partnership with Singapore Airlines since our first flight on 21 September 2016, and remain hopeful that this service will resume once the demand for international travel returns,” he said.

”Canberrans hold a lot of affection towards Singapore Airlines and we look forward to welcoming them back to Canberra at some time in the future.”

Chief Minister Andrew Barr also said the move was not surprising given the international travel bans put in place by the Australian Government and the global collapse in tourism and the aviation sector.

Mr Barr said the decision came as part of a broader announcement from Singapore Airlines that they are also laying off over 4000 people from their workforce.

”Airlines are having to make extremely difficult choices to ensure their long-term survival as it will be many years before any normality returns to international travel,” he said.

”We are grateful for the fantastic relationship we have built with Singapore Airlines over the last five years and we have proven that the business case works.

”When the time is right we look forward to working with Canberra Airport and Singapore airlines to return international flights to Canberra.”

The Canberra Business Chamber said Singapore Airlines’ decision to permanently withdraw flights between Canberra and Singapore was indicative of the large and growing challenges the ACT faces.

It called for political leaders to commit to appointing a Minister for Business to get on with the task of protecting the local economy.

“Singapore Airlines have withdrawn from Canberra. We now have the third-highest rate of payroll job unemployment in the country. And last week, international ratings agency Standard & Poor’s supported Master Builders concerns that the ACT Government will probably fail to deliver about 20 per cent of its projected infrastructure work. These are all lead indicators of looming long-term problems. The canary in the coal mine is singing loud and clear.”

Both cities will continue to be served under codeshare arrangements with Virgin Australia and Air New Zealand, with passengers travelling to and from Canberra having to go to Sydney or Melbourne.

Singapore Airlines currently serves Sydney, Melbourne, Brisbane, Adelaide and Perth in Australia, along with Auckland and Christchurch in New Zealand, for those able to fly.

The Singapore Airlines Group says the downsizing decision was taken in light of the long road to recovery for the global airline industry due to the debilitating impact of the COVID-19 pandemic, and the urgent need for the group’s airlines to adapt to an uncertain future.

The group expects to operate at under 50 per cent of its capacity at the end of financial year 2020-21 compared with pre-COVID-19 levels, and says industry groups have also forecast that passenger traffic will not return to previous levels until around 2024.