“Soft” Raiders eager to show their tough side against Canterbury 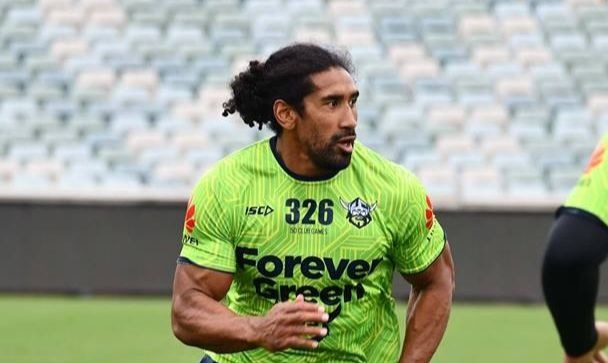 “A lot of us let ourselves, let the team down and let the jersey down,” Soliola said. Photo: Supplied by Canberra Raiders.

After coach Ricky Stuart’s scathing assessment of the side’s performance against Manly, the Canberra Raiders are wanting to show how tough they really are.

Stuart labelled the side “soft” in the post-match press conference after the Sea Eagles ran in four tries in the first half to set up the victory.

Canberra forward Sia Soliola admits the Raiders’ performance against the Sea Eagles on Saturday was not up to standard and Stuart’s comments were accurate of the side’s performance.

“We spoke about things we were going to try and rectify during the Manly game and we were pretty poor.”

“A lot of us let ourselves, let the team down and let the jersey down,” Soliola said.

“It wasn’t up to, not only Raiders standards but first-grade standards as well, so there’s a lot for us to answer for and we’ve just got to get back to work.”

The Green Machine will have their worst start to a season in 36 years – since their inaugural season in 1982 – if they lose to the Bulldogs on Thursday night.

The Bulldogs have also had a poor start to the season, with their only win coming against the Penrith Panthers in round three.

Soliola said the home side are eager to give back to their supporters and are ready to battle the Dogs, who are aiming to bounce back from a loss to South Sydney on Good Friday.

“We’re just thinking about this week and the Dogs, they’re a tough side and after the way they went down on the weekend, we know what’s going to come,” he said.

“All of their forwards will be coming from the car park and they’ll be really getting into us.

“So, we’ve got a choice to combat them or the other way, so for us this week it’s really important for us to give back to our supporters and members and more importantly ourselves.”

Stuart has dropped State of Origin star Josh Papalii for a must-win match against the Canterbury Bulldogs at Canberra Stadium on Thursday night, while Jack Wighton has survived the axe despite an ongoing investigation into an alleged nightclub incident.

Kriso Hadskini - 2 hours ago
If they would just let go of the 1990's living in the U.K rule my husband and I would regularly donate. View
Opinion 36

Brent Carlisle - 17 hours ago
I was shearing in the 1980’s and we where talking about how bad the conditions where then and nothing has really changed. View
James Tartarus-Gibson - 17 hours ago
Patrick Honeysett you and I will get a kick out of this 🤣 View
Property 15

@The_RiotACT @The_RiotACT
The sale of NFF House for $7.7 million reflects the high demand for quality commercial properties, especially in the Parliamentary Triangle https://t.co/C8vWUd1szQ (35 minutes ago)

@The_RiotACT @The_RiotACT
The ACT is expanding vaccine storage facilities at the Canberra Hospital in preparation for the arrival of the Pfizer COVID-19 vaccine https://t.co/GdyfQLw7tE (45 minutes ago)