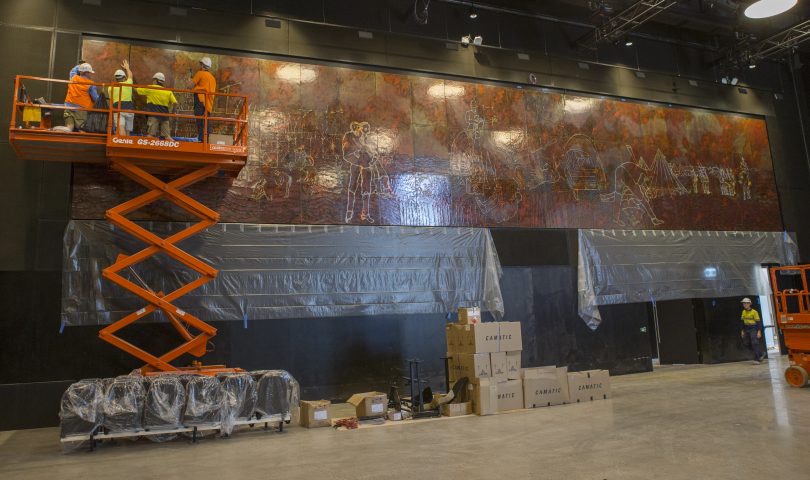 It took a hydraulic hoist to shift it into place, so it’s accurate in many ways that a huge Sidney Nolan at the centre of the ANU’s new Kambri precinct Cultural Centre was hailed by Vice-Chancellor Professor Brian Schmidt as a “monumental gift to the university”.

The 66 copper panels were unveiled yesterday at the precinct opening and depict the Battle of the Eureka Stockade fought in Ballarat in 1854. A gift to ANU from the Reserve Bank of Australia, it joins Riverbend as the University’s second Sidney Nolan and forms part of a larger holding in the national capital.

The Canberra Museum and Gallery has the Nolan Collection, including paintings from the Kelly, Burke and Wills and St Kilda series, central Australian landscape and carcass works, while the major part of the iconic Kelly series is at the National Gallery of Australia along with other works.

Eureka Stockade was commissioned by the Reserve Bank in 1962 but was not completed until 1966. Although Nolan is best known for working in oils, he experimented with other media for large scale installation pieces. The copper panels are marked with nitric acid before being enamelled, creating a richly lustrous work that’s nonetheless fairly difficult to photograph because of its reflective qualities.

The work’s huge size meant that it couldn’t be easily hung at the Reserve Bank, which then sought other places where it would be publicly accessible and could be viewed at its full scale.

The ANU’s new cultural precinct fit the bill for a number of reasons, not least the presence of Riverbend, first acquired from Nolan in 1965. There’s also a link with the late H.C. ‘Nugget’ Coombs, who was pro-chancellor and then chancellor of ANU from 1959 onwards and instigated the H.C. Coombs Creative Arts Fellowships of which Nolan was the first recipient.

Installing the work was a complex task for staff from Abode Restoration and International Conservation Service, who used a hydraulic hoist to lift the panels into place. The work is accessible to members of the public at all times and joins other significant works from the Craig Edwards Collection, the most valuable donation of its kind yet given to an Australian university. 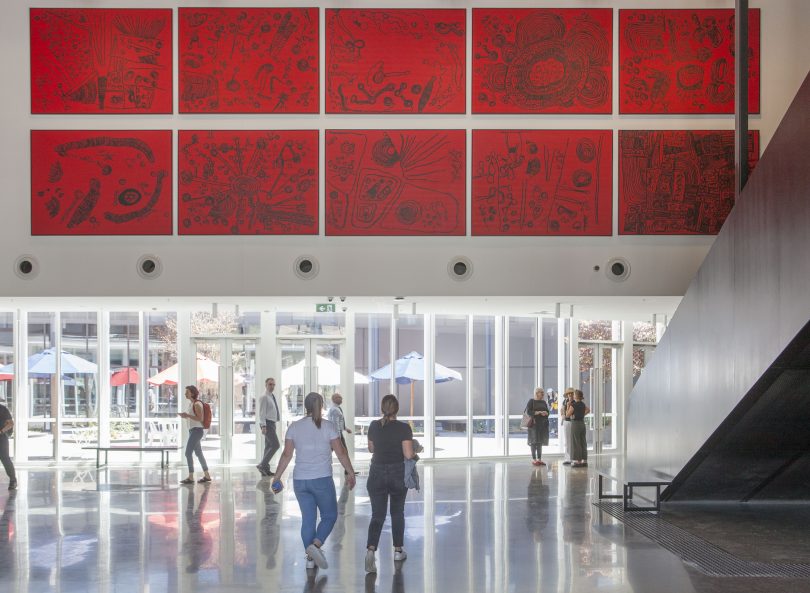 The Craig Edwards collection comprises 120 Western Desert paintings valued at over nine million dollars, focusing on a cohort of senior women, most of whom had begun painting late in life.

ANU Vice-Chancellor Professor Brian Schmidt AC said the Nolan would be a focal point in the thriving precinct, which includes a student residential hall, teaching and learning facilities, a health and life centre and more than 40 shops and retailers.

Kambri’s cultural centre includes a theatre, cinema and large hall that can accommodate public lectures and events as well as large music acts.

Ian Fraser - 32 minutes ago
Yes, that's how they're generally referred to and you won't go wrong by doing so. Bear in mind though that Eastern Water Drag... View
News 20

Linda Stapleton - 36 minutes ago
Hans Dimpel I will await the inquiry into the inquiry of the inquiry, before making up my mind. View
Linda Stapleton - 39 minutes ago
Might I suggest that the review can come up with what ever opinion they choose, but the opinion of voters is more important.... View
Robert Cox - 2 hours ago
"...it was overall an effective way to have stimulated the ACT’s post-lockdown economy" is an odd way to define "inconclusi... View
Community 29

Ben Phillips - 1 hour ago
There’s about 20 acres sitting unused next to Lyneham primary. Mixing in some high density housing (units) with community p... View
Jenny Lawrence - 1 hour ago
Joshua F. Johnson any form they take, including the current one, closes off some uses - that's not an argument not to conside... View
Joshua F. Johnson - 2 hours ago
Jenny Lawrence they’re not “ovals” they’re just open outdoor spaces. You might want a pool there. You want want the D... View
News 2

TimboinOz - 2 hours ago
I generally support 'green' ideas. But not this one. I'm not all that keen on 18 and over for voting, either! Because I have... View
Acton - 3 hours ago
There are many reasons why children have not been given the vote or allowed to stand for parliament throughout history in any... View
nobody - 3 hours ago
riccardo, which age do you think that should be? View
News 8

Frank Walmsley - 5 hours ago
This is great news/ what happens if the price drops can buyers terminate contracts or are the locked in also? View
assiduous - 19 hours ago
The ACT government is culpable for this situation. If the developers couldn't get $200k more for these properties they would... View
Public Sector 58

James Kanana - 5 hours ago
Ahh, but you must remember the move to contracting started under Keating when they made the top levels under contract to make... View
Lifestyle 12

Wendy Whitnall - 19 hours ago
Kaija Murray me too and the sound is tuff too. View
Courts & Crime 12

The Opposition has had a motion to refer ACT public teachers' pay and working conditions to the Fair Work Ombudsman...
Opinion 35

@the_riotact @The_RiotACT
A new report shows the @CBR_IN is delivering #employment and income to the ACT, to the tune of 400 direct #jobs and $100 million into the economy https://t.co/UHVkhwYbTq (39 minutes ago)