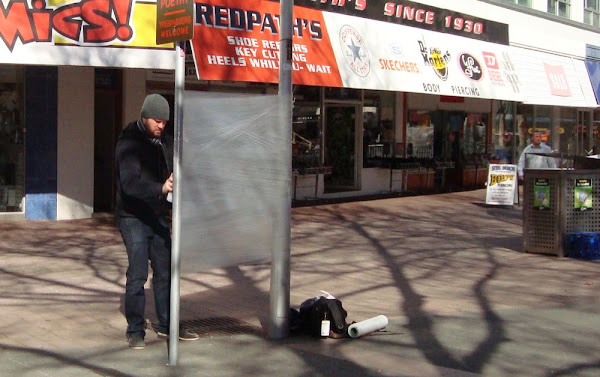 I was walking through Garema Place today and, unsurprisingly, I saw something a bit odd. There was a man just casually wrapping some cling film around two poles outside of Impact Comics. I’ve seen quite a few strange things at Garema and I decided to stick this one out, to see if he was going to just leave it there or what.

He pulled out a can a spray paint and started to graffiti onto his strange canvas. I was standing behind it at this stage and so I walked behind him. It was a bit hard to see what he was trying to do at first but I eventually got the gist of it. It was a nice swirly pattern. But when I thought the art had reached its natural end, he kept going. 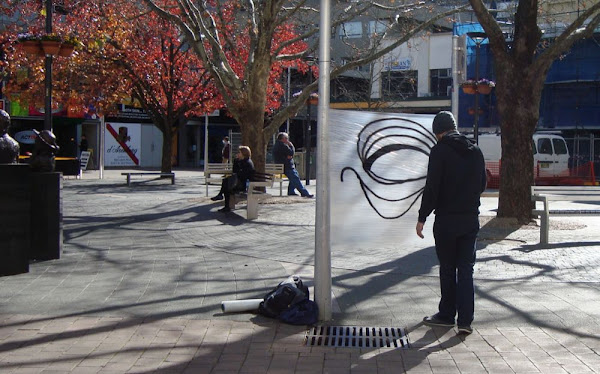 He put away his spray can and pulled out some permanent markers, continuing with the pattern and transforming the picture into something more recognisable; an eye. He embellished around the eye and the gaps that he had left around the main shape. He continued the embellishing in the black spaces but with a silver marker. He signed it as “Walrus”.

I haven’t seen much of this sort of art around town and I would especially like to see some more ANU art student’s work up around the place. 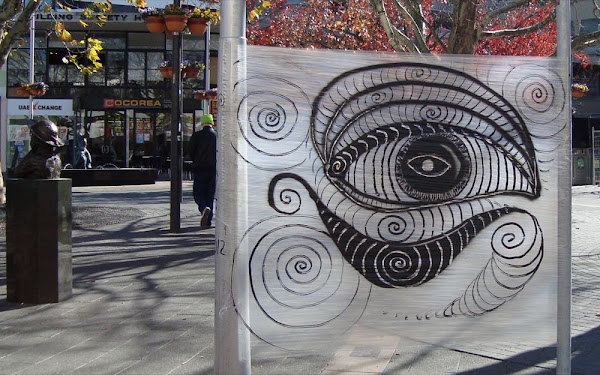 Big fan of street art but this…… not so much.

“All artists are willing to suffer for their work. But why are so few prepared
to learn to draw?”
? Banksy

Unlike the Sisterhood rep who left a bit of knitted graffiti to collapse and moulder on the lightpole it had “decorated” in Lyneham a couple of years ago(eventually cleaned up by Urban Services), I hope the artist will come back and chuck it all in a bin once it has made its point & been appreciated!

Brings to mind Mully’s little (but boguetastic) shrine on Cbr Ave … wonder how long Urban Services will let that moulder for?

There is another one on Allsop St on the other side of the road from the Citywest Car park entrance. Similar style; looks good

I was watching him do a similar drawing just outsde the Canberra Centre near the fountain as well. Nice tags and I like the fact it isn’t graffitti and easily removed.

Unlike the Sisterhood rep who left a bit of knitted graffiti to collapse and moulder on the lightpole it had “decorated” in Lyneham a couple of years ago(eventually cleaned up by Urban Services), I hope the artist will come back and chuck it all in a bin once it has made its point & been appreciated!

Eye am the Walrus?

Was he an eggman?

Certainly more pleasing and interesting than the official art pieces they’ve shoved around the place.

That said, some bogan from (insert your favourite bogan suburb) will probably trash it before the week is out.

Dunno about pleasing as it’s not really my style, but good on him for brightening the place up without defacing things. Top idea. And I doubt the artist would be too upset by it being trashed – cling film isn’t the most permanent substrate.

Certainly more pleasing and interesting than the official art pieces they’ve shoved around the place.

That said, some bogan from (insert your favourite bogan suburb) will probably trash it before the week is out.

Mark Oz - 1 hour ago
That was 13 years ago Christopher Stuart Veilands and perhaps VAD was not a forefront issue for a majority of citizens back t... View
Community 38

Warren Brown - 2 hours ago
There is so many issues with this fine, poor road markings and disable signs in the wrong location, Don that the issues to co... View
Lin Van Oevelen - 2 hours ago
Rooster James The reason why so few people do this is that it'll immediately go to court and you'll be made to pay court cost... View
Tracy Robinson - 2 hours ago
Sorry, but disabled parking is also signposted. View
Food & Wine 6

Craig Robinson - 4 hours ago
Nada Krstin exactly! I just sent an update to the petition supporters via change org. Thank you for your support View
Monica Tiffen - 4 hours ago
I think ambition is a great thing, and if , by working hard, and saving, by doing without, I am not jealous of attainments. W... View
Serina Reid - 5 hours ago
Oh give the 🐕 Dog back wtf View
Community 6

David Vickers - 5 hours ago
And black cats View
Juz Hawke - 7 hours ago
That's cool actually! View
Graham Baxter - 11 hours ago
I wish it was the only place in Canberra we see graffiti View
News 3

bj_ACT - 5 hours ago
I wholeheartedly agree that the impacts of recreational drug use by the middle class, wealthy or University student is far fa... View
Anthony Chase - 6 hours ago
Truth telling. Thank you. View
Courts & Crime 6

John Moulis - 6 hours ago
Long Gully Road has a history which goes back before Woden and Tuggeranong, indeed before Canberra itself. It originally ran... View
Rob Calvert - 17 hours ago
Almost every day I witness acts by drivers on Canberra roads that are in flagrant disregard of the road rules. Stop signs are... View
Property 10

OLydia - 6 hours ago
The big difference between houses and apartments is the land. If you have control over the land your dwelling is on, then it... View
Courts & Crime 3

Spiral - 8 hours ago
So what happens if he is caught driving again? I know someone who still has years of a driving disqualification period to go... View
News 51

Jim Donaldson - 17 hours ago
Karen Evans maybe, but I was referring to the the folk reported on in the RiotAct post, which I think is a good thing. Not su... View
News 26

Capital Retro - 17 hours ago
So Australia could convert our coal burners to bushfire fuel burners and we would suddenly lead the world in having the lowes... View
show more show less
*Results are based on activity within last 7 days

A severe weather warning has been issued for south-east NSW and southern parts of the ACT for damaging winds averaging...
Property 10

ACT Health has confirmed that 11 people in the Territory tested positive to COVID-19 yesterday, but urgent retesting of 10...
Courts & Crime 3

Development along the light rail route to Woden is likely to include apartments of some kind but not to the...
News 45

Stickers with QR codes that link users to non-COVID-related websites have been placed over some legitimate QR code check-ins in...
Community 38

A disabled parking spot outside Mawson Domino's pizza is the latest spark in an ongoing debate about roads and parking...
Opinion 32

Canberrans are being urged not to flush away the ubiquitous wet wipe in a bid to reduce the amount of...
News 81

Tuggeranong needs to grow up and shed nappy valley tag

Getting to the ‘art’ of dementia: researchers highlight benefits

@The_RiotACT @The_RiotACT
Some disruptions will be experienced as works start to ramp up on Queanbeyan's new cultural precinct https://t.co/D96d4nDMUl (2 hours ago)

@The_RiotACT @The_RiotACT
Kathryn Ross is a four-time world para-rowing champion and three-time Paralympian who balanced her training for Tokyo while working as a nurse at Canberra Hospital's emergency department https://t.co/JBlH8qlboX (3 hours ago)

@The_RiotACT @The_RiotACT
Mawson resident Don says disabled parking signage should be clearer in some places after his wife was recently fined for accidentally parking in a restricted space https://t.co/xl3vGVfoHV (5 hours ago)