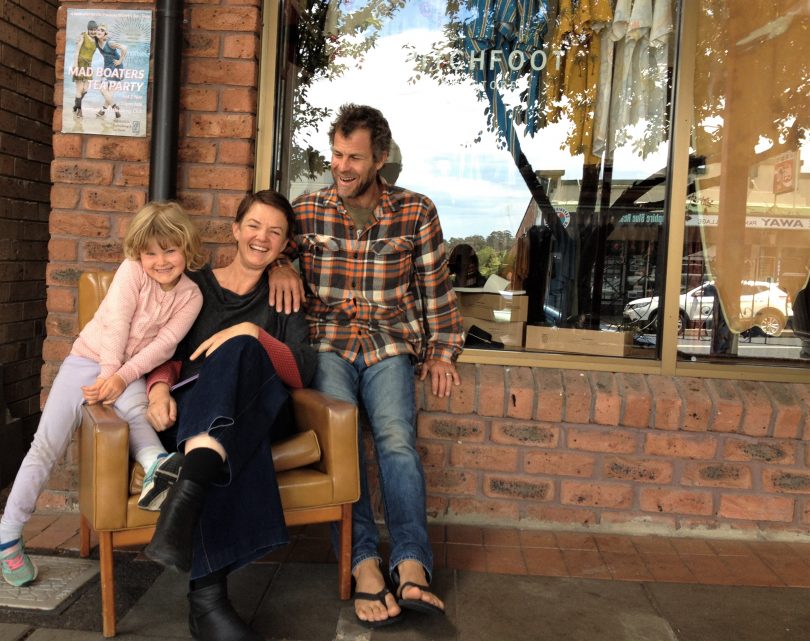 “Surfing is a young sport in Australia,” Bournda-based board shaper Jed Done says thoughtfully. “The first foam boards were being made in the early 60s. Before that, it was all timber.”

Jed has been catching up on surfboard technology since he first began building boards when he was 15 and is now one of a handful of hand-shapers in the world, known for his trademark negative rocker in the tail of the board, which increases drive and speed.

You can watch Jed shape his boards through a ‘fishbowl’ glass window which looks into a small workshop at the back of the Pambula surf shop, Switchfoot Boardstore, that he runs with his partner, Patricia Mills.

“People are craving the old-school surf shops, where you’d sit around and talk waves for hours and they are also wanting a relationship with the shaper,” Patricia comments. “When Jed is making a board for someone, it’s often months of emails back and forth about the finer details, a custom product made just for that person and the wave they ride.” 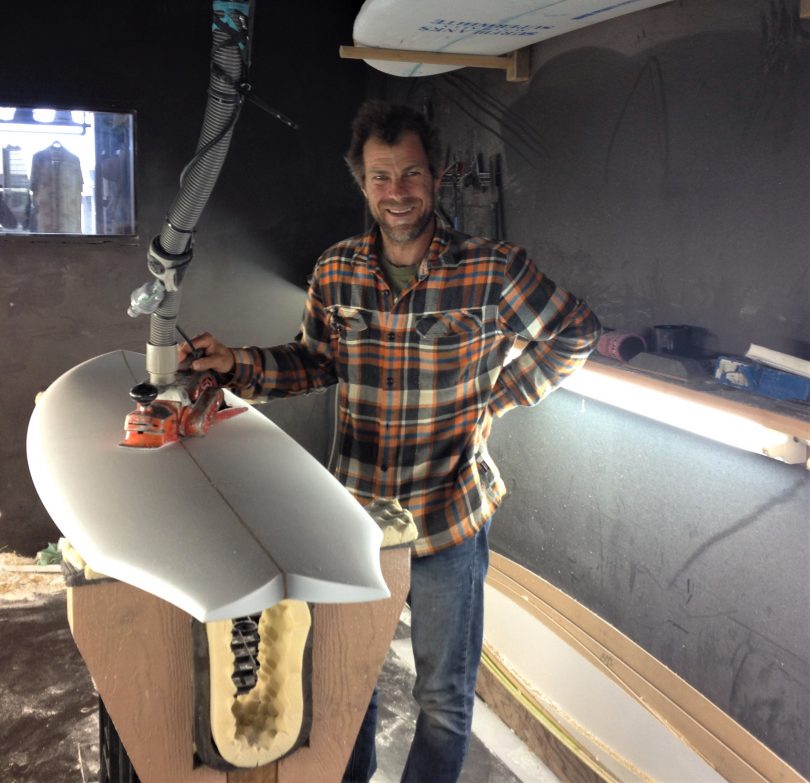 Jed in the small workshop at the back of Switchfoot Boardstore. He also has a big workshop at his Bournda home. Photo: Elka Wood.

Switchfoot was born two years ago when the couple noticed empty shops around Merimbula and Pambula and contemplated having a pop-up store to spread the word about Jed’s boards.

“But when we realised that Jed could work out the back in quiet times, we went with it. It works for our family. It’s a friendly, homey place to be,” Patricia says.

There’s certainly a lot of family around the store, with a collection of Patricia’s siblings, nephews and in-laws drifting in and out, creating a bustling atmosphere.

“I come from a big surfing family. We’ve been in Pambula for generations,” she laughs, “but Jed is a first-generation surfer.”

He’s making up for lost time though and is just back from ticking an item off his bucket-list: surfing Jeffreys Bay in South Africa, the best point break in the world.

“I’ve always wanted to surf that spot,” Jed shares with a wide smile. “I took four boards in one board bag.” 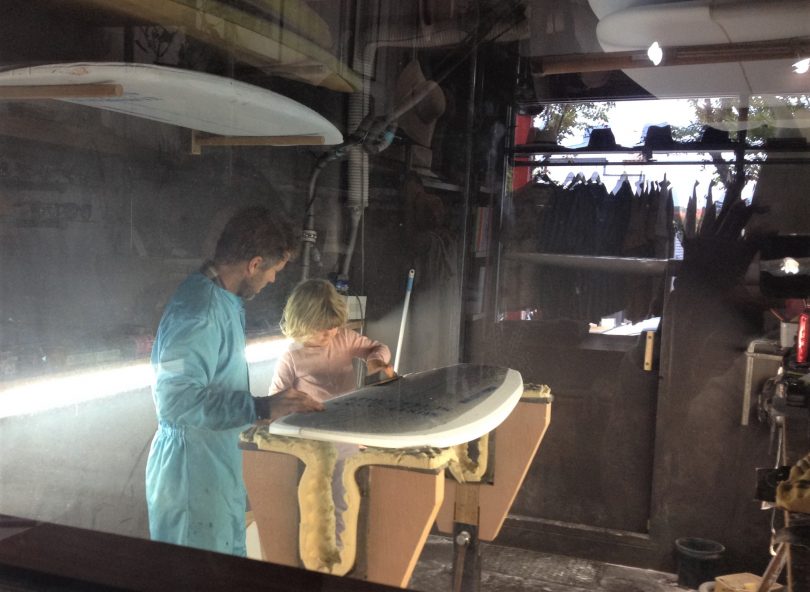 Jed jokes that his four-year-old daughter Florence is his “ghostshaper”. Photo: Elka Wood.

Pambula river mouth once had a world-renowned break, too and in the background, perhaps every Pambula surfer is hoping that one day, the break will return to its former glory.

“Pambula has such a strong surf history,” Patricia explains.

“In the 70s and 80s, the river mouth was a world-famous wave and while it’s still renowned, since the river silted it hasn’t been the same. But every now and again there’s a big storm and it looks like it might wash out, so we all keep hoping.”

In the meantime, Jed is perfecting his design, looking to sacred geometry for inspiration.

“I’m still finding formulas and patterns. It’s all numbers. We know what works in surfing. We know the board needs a curve, it’s just a matter of how much,” explains Jed, who is self-taught, with a carpentry background, and uses a drafting program to design the curves of his boards.

Jed and Patricia have been developing their business model as part of the University of Wollongong’s Innovation Hub, which Patricia says has been “pretty perfect for us”.

Surfing may be young in Australia but the small coastal town of Pambula is not history yet. And with Jed Done boards and Switchfoot on the scene, it looks like it’s got a big future ahead.

Dwayne Still - 1 hour ago
Lucky to escape View
Chris Durban - 11 hours ago
A warm welcome, my best wishes for their future lives here. I hope they settle in and find peace and happiness 🤗... View
News 32

Hunter Smithers - 1 hour ago
Staring at your speedo instead of watching the road is far safer for pedestrians !! View
Bob Foster - 9 hours ago
You had me till the 2nd sentence of your 2nd paragraph Gai Wil THEY need to realise that roads were built for cars etc, and a... View
Matt Flagget - 9 hours ago
Tony Siciliano yep, us too - gone. Born, raised and lived most of my life in Canberra but it’s green/left underbelly is rot... View
News 23

Tom Wills - 6 hours ago
Jorge Gatica Dont rent your house then, simple. Pay for it off your own back rather than the backs of tenants. Actually stick... View
jorie1 - 11 hours ago
Agree Realist. Landlords in the ACT are not treated fairly. I guess the proof is in the lack of rental properties available.... View
Rob - 11 hours ago
This article seems to misunderstand some basic investment concepts: “But the main reason for owning rental properties is no... View
News 13

Penelope Farnsworth - 8 hours ago
I thought it was removed for a while during the insurance “crisis”, but maybe it was another playground. They gutted a fe... View
gooterz - 8 hours ago
The previous iteration of the kambah flying fox had stairs to climb and a rope to bring it up to the platform. It was more a... View
erikah - 11 hours ago
Tahlia is one of the most intelligent 14 year olds I have ever met. She’s incredibly cautious when it comes to risk assessm... View
News 1

rspg - 8 hours ago
So wait... from what I'm reading here, the 80% vax rate triggers eased restrictions from tomorrow, which includes that we can... View
Lifestyle 32

Il Padrone - 8 hours ago
Costanza Maffi what is this fascinating attraction that cockatoos have for alpacas? 🤔 View
Sophie Patterson - 10 hours ago
James, I love the namea View
Property 10

Rob - 11 hours ago
You missed their best wine: the sparkling Shiraz. It is just magnificent and I think the only one in region. Worth the trip o... View
show more show less
*Results are based on activity within last 7 days

Nestled among picturesque gardens, this stone and timber cottage could have been lifted straight from the pages of a children's storybook....
Lifestyle 32

With the ACT Government's revenue from traffic infringements predicted to more than double this financial year, a standing committee has...
News 55

@The_RiotACT @The_RiotACT
A group of dedicated #volunteers are discovering and cataloguing #historical artefacts from #Goulburn Base Hospital's past, including surgical implements and kitchenware https://t.co/1eJzjA3oHe (21 minutes ago)