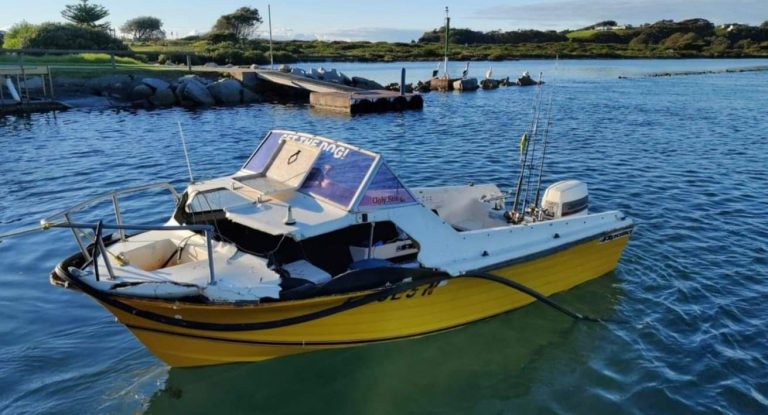 Nick and Matt’s damaged boat after the accident in which a whale landed on them off the coast of Narooma. Photo: Supplied: Carmen Bartley.

The 18-year-old man injured by a whale in a freak accident on the NSW South Coast has woken from an eight-day coma a week before his 19th birthday.

Nick Myhill was placed into a coma to help his body recover from serious neck and head injuries after a whale landed on his small fishing boat.

Nick was with his stepfather, Matt Price, off the coast of their hometown of Narooma on Sunday, 6 June, when the whale surfaced from beneath the water.

The teenager’s family said the pair had “no warning and no time to react”.

Matt was also injured but returned the boat to shore and made a mayday call on the radio.

Nick is described as a “top bloke” and “strong” by friends and family. Photo: Supplied: Carmen Bartley.

Matt was treated at Moruya Hospital for cuts and bruises, while Nick was transferred to Canberra Hospital.

On Monday (14 June), Nick surprised his family by waking from the coma. He has been communicating well with his family and medical staff since.

The family said that Nick remembers what happened to him, but they are unsure what his future holds or the extent of any permanent damage.

“However, he is alive, awake and responsive, which is absolutely amazing considering what he has been through,” said the family.

“We would like to thank the media and the general public for their support and prayers for Nick and our family during this awful time.”

The ‘Keep Nick Afloat’ GoFundMe page, set up by a friend of Nick’s family, Carmen Bartley, has raised $22,150 so far.

“We are still a way off our goal amount; however, the donations to this point will go a long way to helping Nick in his recovery,” said the family.

The family said they would provide further updates on Nick’s condition in the coming weeks.

“For now, we are enjoying having our beautiful boy back and spending as much time with him as we can,” said the family.

Nick’s family are thrilled he will be awake to celebrate his 19th birthday on Sunday, 27 June.

Danny Murphy - 11 minutes ago
Just don’t speed! View
Acton - 2 hours ago
The idea of differing fines for the same traffic offence is just as stupid as introducing differing prison sentences for thos... View
Patrick Fischer-Reid - 4 hours ago
Steven Miller If the crime is the same, surely the penalty should be designed to have the same impact and the same deterrent... View
News 24

phydeaux - 27 minutes ago
Quite so. To put some rough numbers on it, 2017 was a peak flu season in which near 1200 people died, but the 4-year average... View
chewy14 - 1 hour ago
Can't remember when anyone said anything about compulsory flu booster shots? We are talking about Corona Virus, which is sign... View
Acton - 2 hours ago
The chief executive of Pfizer has said that it is likely people will need a Covid jab every year going forward. “Both wanin... View
Community 1

Peter Graves - 33 minutes ago
Thanks for such a well-deserved tribute to Alan Foskett. Canberra has indeed lost a treasure. He was very keen to record a ra... View
Opinion 3

John Giacon - 49 minutes ago
Big trees too near houses can be a problem - the tree or branches falling, and they make gardens impractical in many areas be... View
candlelit - 2 hours ago
I agree but (a) we need to think more about the kinds of eucalypts we plant (and having lost power for four days earlier this... View
Acton - 2 hours ago
Nonsense. The author negligently fails to acknowledge that gum trees are more prone to catching alight because of their oil c... View
News 4

Tom Worthington - 52 minutes ago
In 2020 HE faced a crisis, but this was not unexpected. Some universities, particularly those in Singapore, had prepared for... View
Food & Wine 4