The final piece of the puzzle 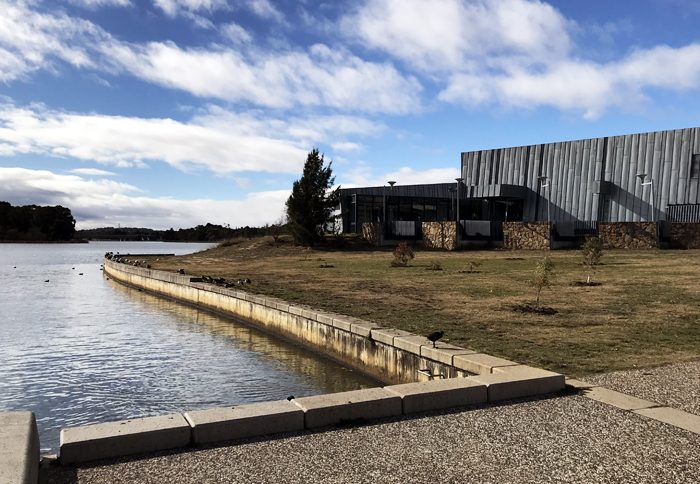 The current boardwalk at Emu Inlet ends abruptly to the west of BAC. Photo: Supplied.

A pre-budget press release from Meegan Fitzharris MLA and Mick Gentleman MLA announced $33.8 million in funding for improvements to local infrastructure in several ACT town centres, including the development of the Belconnen Bikeway, a “fully integrated active travel loop” around Belconnen and the Lake Ginninderra foreshore. A small section of this project is planned to cross the currently undeveloped shoreline to the north of BAC, connecting Emu Inlet and the Foreshore Promenade and providing a longed-for interface between BAC and Lake Ginninderra. It’s the final piece of the puzzle and will complete a circuit all the way around Lake Ginninderra. But what form it takes is yet to be determined – and that’s where you come in.

BAC has high hopes for the Boardwalk Extension project; when works were carried out on Emu Inlet in 2011, future plans envisioned the foreshore area around BAC as a continuous arc that joined with the Foreshore Promenade, a feature that was echoed in the Belconnen Town Centre Master Plan and informed the design of BAC Stage 2. 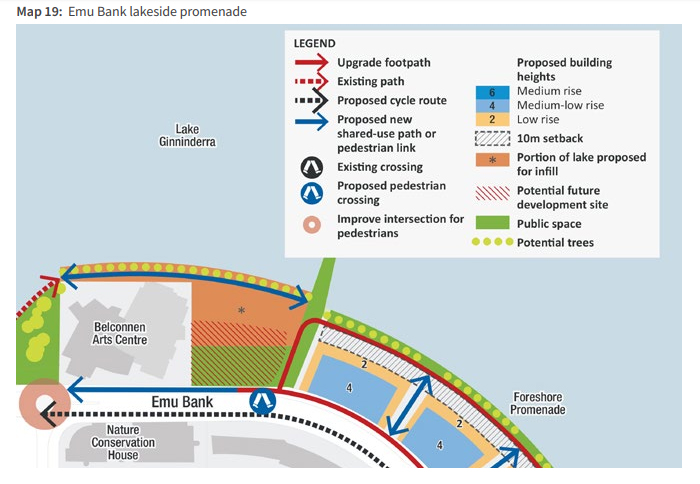 Map 19 from the 2016 Belconnen Town Centre Master Plan (p.75) depicting land to the east of BAC infilled and the Boardwalk connecting Emu Inlet and the Foreshore Promenade.

Currently, the shoreline around the Centre is steep, inaccessible and unsafe for use. BAC is keen to see the Boardwalk Extension incorporate accessible design, such as gentle gradients and paths wide enough to safely accommodate bicycles, pedestrians, prams and wheelchairs, with a “soft edge” leading into the Lake to encourage use by kayaks and other watercraft. 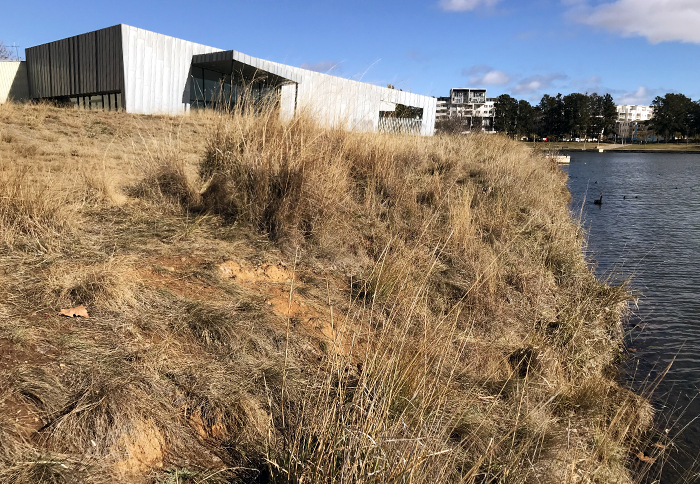 The current state of the shoreline around BAC. Photo: Supplied.

A thoughtfully designed Boardwalk Extension that interacts with BAC’s indoor and outdoor spaces will make the Centre a wonderful meeting point for the community. With a cafe planned in the northern section of BAC Stage 2, people can finish off their Lake walks with a coffee as they watch the reflections of the surrounding landscape glint on the water. The 400 seat auditorium that will be built as part of Stage 2 will also present surrounding businesses with fantastic opportunities, as hundreds of people will be funnelled via the Boardwalk Extension to restaurants and cafes around Emu Inlet and the Foreshore Promenade when large events are held. 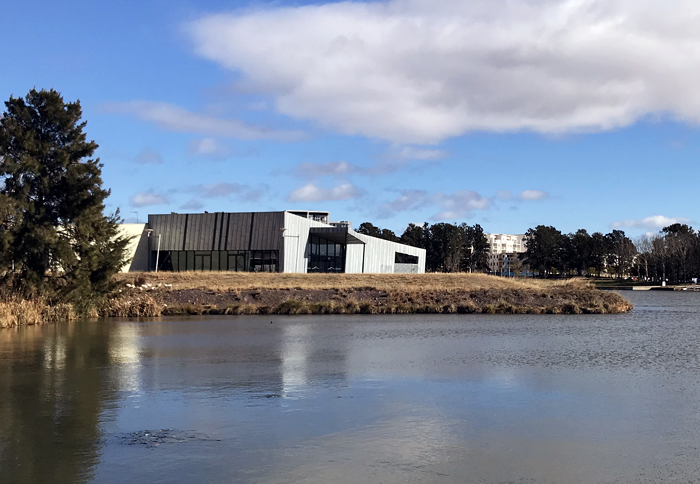 The inaccessible shoreline surrounding BAC, viewed from the Foreshore Promenade to the east. Photo: Supplied.

We’d love for you to take part in the Boardwalk Extension feedback process now live on the ACT Government’s Your Say website. Do you want to see the awkward landscape around BAC infilled to create a beautiful community BBQ area? How about an interactive sculpture park that encourages kids to climb and play? An amphitheatre, or something completely out of left field? The Lake Ginninderra foreshore is a backyard for many of the residents in nearby apartments and townhouses, and with an expanded BAC set to become a 21st century town hall for the Belconnen region, it is essential that any development of the foreshore meets the current and future needs of the community who live and work on it.

Tell the ACT Government your views on the Belconnen Arts Centre Boardwalk Extension and the Bikeway project via the interactive map on the Your Say website; just click on the blue Comment icon and drag it over the area of the map you would like to comment on before 2 July 2018, when community consultation closes. Alternatively, fill in a hard copy survey at Belconnen or Kippax public library branches, and let others know what you think below!

How do you envision the Belconnen Arts Centre Boardwalk Extension?

Whatever it is, should have an Australian flag pole stuck into the ground 🙂

A water park for kids to play in like the one in Weston Park, Yarralumla.

We totally agree, Amanda; in 2015, we invited third-year UC Landscape Architecture & Urban Design students to respond to the project with their ideas, and we then exhibited their designs at the Centre. Some fantastic ideas were put forward, so let's hope some of them make it to the final design!

Somewhere for kids to play sounds great, and a sculpture park would certainly be more interesting (and better suit the proximity to the arts centre) than a standard playground. Great suggestion!

The lake isn’t really a lake.. Its just a big pond.

Seems most places around there don’t even care of the lakes existence. I remember going to ha ha bar and others and not being able to see / smell the “lake”.

If we now have 40km/h in town centres and laws against driving close to cyclists why do we have to build separate cycle infrastructure?

Do something to bring people down there. We have such a beautiful lake and on most days majority of people are at the mall!

The interactive sculpture park would be wonderful.

Working nearby when the Arts Centre was first built I always wondered why the whole precinct wasn't properly landscaped, especially when they spent so much on the wall and paths at the western end.

chewy14 - 39 minutes ago
Kenbehrens, "potentially safer". We are all "potentially safer" if we never leave the house either, but luckily most of us un... View
JC - 46 minutes ago
Chewy in this instance it is NSW who is doing something different and did so without consulting or advising the ACT who is im... View
chewy14 - 1 hour ago
You do have to laugh at their statements about "being more comfortable" with further changes because of the high Vax rates. T... View
Opinion 85

jorie1 - 43 minutes ago
Hi Assiduous, I do agree that $500 per week is a lot of money - but the majority of that money goes to the ACT government in... View
assiduous - 1 hour ago
$500 per week is not low - it is enough to build a modest detached family home every 10 years. It is a reflection of Australi... View
Peter Jovanovic - 4 hours ago
So if it all gets too hard for the parasitic landlords and their parasitism isn't as lucrative as they hoped they'll just dem... View
Property 11

Claire Anderson - 1 hour ago
Daniel, the newer ones really do stop way WAY more abruptly. I too rode the old ones with help of people pulling and never go... View
James Coleman - 2 hours ago
Hi Kane P-s and Bec Lester , the journalist behind the article here - just about to send you each a DM concerning your storie... View
Brianna - 2 hours ago
It is so good that her family can be there for her. I know her mum will fight like a tiger to ensure that this flying fox is... View
Opinion 4

kenbehrens - 1 hour ago
Alicia Payne, I guess it comes down to the priorities of the ACT Government. If the Government is so concerned about health,... View
News 42

@the_riotact @The_RiotACT
The ACT #Integrity Commission's first report is imminent, and the #corruption watchdog will soon have phone-tap powers https://t.co/usBVGpKfEW (1 hour ago)