The inside out of Deadwood 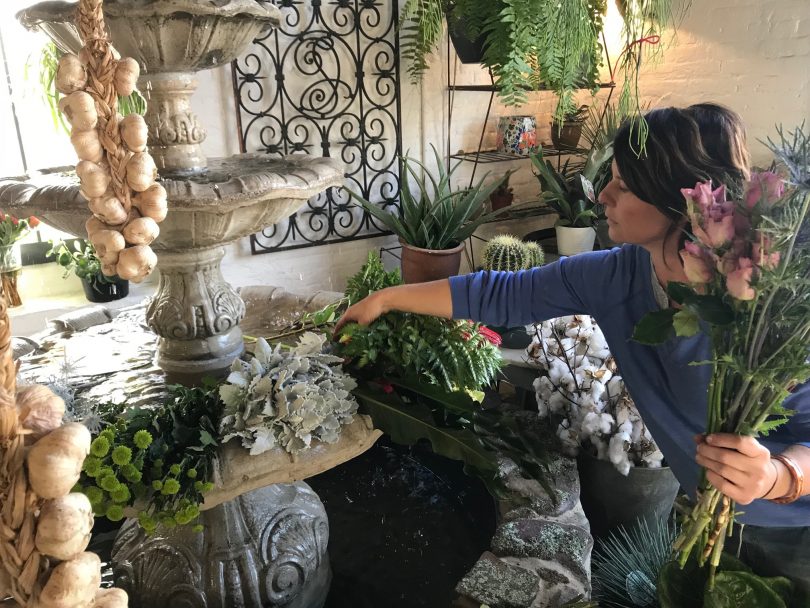 Braidwoodians have long referred to Braidwood as Deadwood – in a lovingly, ironic kind of way. There’s always been so much life and creativity in the place, although it may seem a little sleepy at times when driving through.

Now a new ‘establishment’ has opened called ‘Deadwood.’ Proprietor Dee Allchin already has lots of runs on the board when it comes to hospitality in Braidwood, formerly serving up tasty treats at the old Albion Café, Dee-Licious and The Fickle Pickle.

‘Deadwood’ has arrived. The former art studio, furniture workshop, and Braidwood Times office in the 1860s coach house, on Duncan Street, has been transformed by adaptive reuse into a modern business. One of the most photographed buildings in Braidwood, with patina dating back to the 19th century, has been given a makeover to bring the outside in. 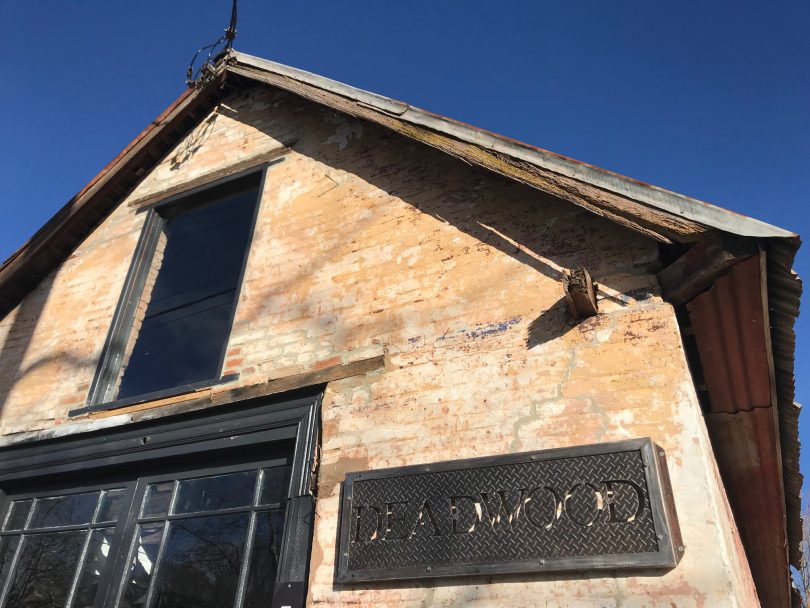 The restored exterior of the former coach house.

On a cool winter day, you pass from the austere exterior into a tropical gothic interior, with hanging plants, cow skulls and luscious flowers, homewares and the smell of Campos coffee and cakes.

The ceiling has been removed to reveal the original shingled roof slats, now under iron and stable beams, which have been intersected by a massive electrified iron chandelier.

Allchin’s partner Dave Sargent is a whizz with a welder. With his passion for restoring both wood and metal items, Sargent has transformed the building with decorative and functional details and also has some items for sale. 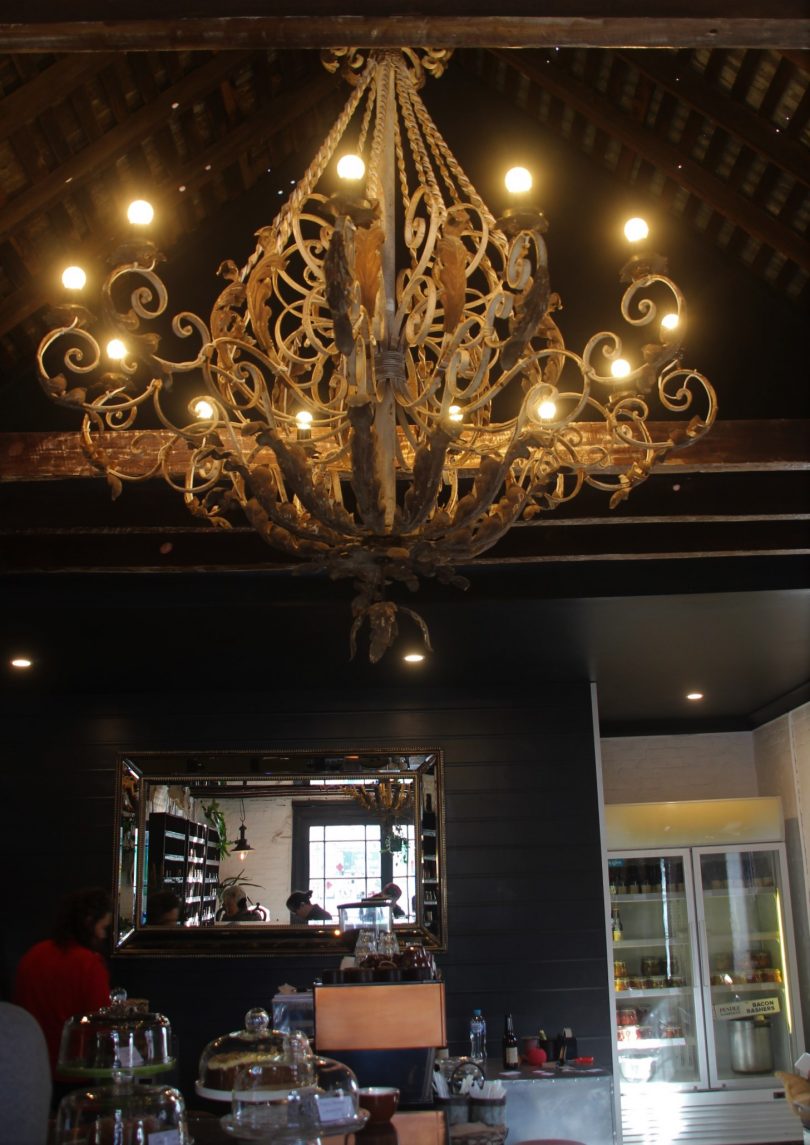 The massive iron chandelier suspended through the rafters.

All this hard architectural work is offset by the real passion of Allchin – flowers. Bold modern natives and cotton still on the stem, are just some of the natural forms Allchin uses to make stunning arrangements. She will be joined by Inke Falkner to do some floristry workshops in coming months. Locally grown garlic will also be available in season.

Homewares include the rustic glazed pottery made less than 100 metres away by Kate Carruthers and Michael Warner, and antique objects from Longbarn & String from further along Duncan Street.

Not to disappoint former clientele, a full arsenal of locally made pickles and fermented products are available for sale.

There is limited seating in the shop, but it’s a sumptuous spot to drop in for a takeaway and to drink in the sights and smells on offer. The food on offer is a smaller selection of cakes, pastries and soup, including seasonal and local produce.

Deadwood is just off the main street on Duncan Street, opposite the Landmark Rural Merchandise Store. 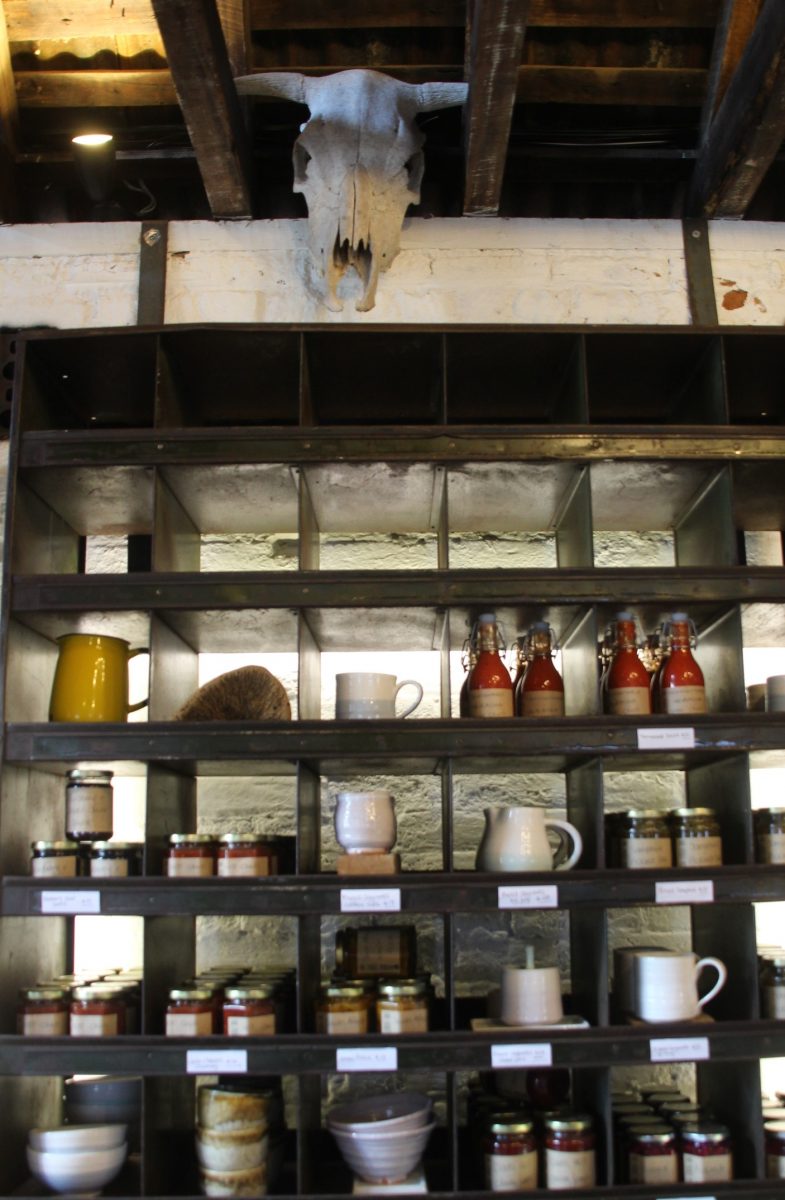 A range of pickled and fermented products are available alongside local pottery.

Heidi Brennan - 15 minutes ago
On a recent trip to Canberra Hospital I was surprised at how patient drivers were giving way to pedestrians at zebra crossing... View
Alex Fox - 31 minutes ago
Ali Light Alasady nah that just makes you the angry driver 😌 View
Paul Funnell - 3 hours ago
I have no problem with people doing the speed limit my hate is people doing 10-15 kph under the speed limit for no reason peo... View
News 8

Michael Ilsley - 30 minutes ago
Privatise education View
Paul South - 4 hours ago
A broom through the whole works would be nice . The whole system is unnecessary complicated. The culture of the whole school... View
Stephen Matthews - 6 hours ago
Paul Leins You can spot ghe sky viewers here View
Breaking 22

Bill Gemmell - 2 hours ago
That traffic in Lyons is about to get a whole lot busier with all the construction about to start View
Michael Roy - 5 hours ago
We need to create some LTNs View
HiddenDragon - 6 hours ago
"... and start frontloading infrastructure instead of just thinking about it and retrofitting when demand is overwhelming." W... View
Lifestyle 1

mattwatts - 4 hours ago
The fact Transit is included demonstrates this is yet another botched scheme. Venues that are still operating have missed out... View
Property 24

Vicki Schramm - 5 hours ago
Marty Hoenig , actually the drinking water here is amazing. Although it did take a while to get it right. View
Breaking 1

@The_RiotACT @The_RiotACT
Want a new best bud? Our @rspcaact #PetsoftheWeek Buddy the dog and guinea pig Porky are looking for their perfect matches https://t.co/vtlWP23MJc (5 hours ago)

@The_RiotACT @The_RiotACT
This owner-built #McKellar family home comes with all the indulgent extras that elevate everyday living https://t.co/fXeV7HnGCL (6 hours ago)