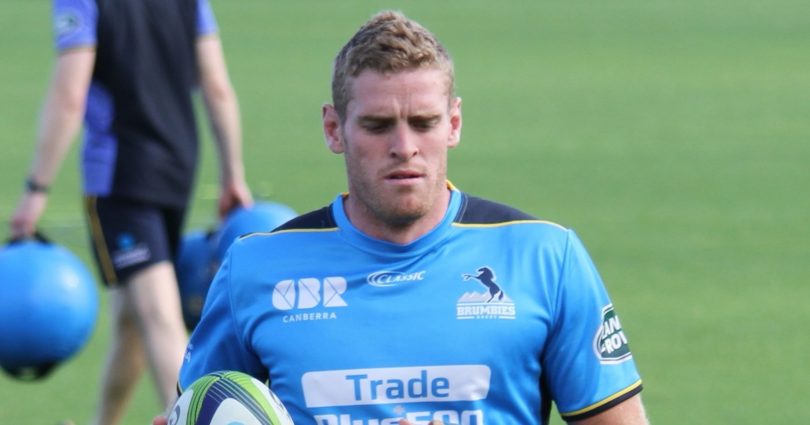 “It’s a tough pill to swallow but it’s also an easy one in a way because you know that he is the best in the world,” Cusack said. Photo: Supplied by Brumbies Rugby.

No professional footballer wants to start games on the bench but flanker Tom Cusack is happy to swallow his disappointment and listen and learn from the man who took his starting jersey.

Cusack earned his starting spot in the Brumbies number seven jersey in three of the first four games while David Pocock was sidelined with a knee injury.

Pocock made his return to the Brumbies starting side during the side’s loss to the Waratahs on Saturday night at the expense of the 24-year-old.

While it was a hard pill to swallow for Cusack, the former Australian sevens player is happy to be a sponge and learn everything he can from the 65-test legend.

“It’s a tough pill to swallow but it’s also an easy one in a way because you know that he is the best in the world,” Cusack said.

“He got three turnovers on the weekend which is more than the whole team has got all year, so little things like that you take for granted.”

“He’s also a great person to have around and the team has lifted from having him back, so it’s an easy one for me, I’m happy to be on the bench behind him.”

“That’s what it’s about, when you have someone like him in your team and in your position then you have to learn as much as you can,” Cusack said.

Cusack said that a lot of people say a lot of things and sometimes it goes through one ear and out the other, but not when Pocock is around.

“With people like him [Pocock] and Christian [Lealiifano] and coaches like Laurie [Fisher], people who have been around for a long time and are at the peak of their game, you listen and learn.”

“Having their knowledge readily available is the best thing possible for my development right now.”

The Brumbies fell short against the Reds when they played earlier this season, and the Canberra side wants to make amends in a do-or-die clash.

“They’ve got a massive outfit and it’s just about asserting ourselves as a strong forward pack,” Cusack said.

“We’ve probably fallen short of that in some games this season, but without a doubt, we’ve shown in most of our games we’re capable of being one of the strongest forward packs in the competition.”

In other Brumbies Rugby news, promising hooker Folau Fainga’a has committed to the club for a further two years after putting pen to paper on a new contract.

The youngster, who burst onto the Super Rugby scene with a lively cameo from the bench during the Round 3 match with the Rebels in Melbourne, made his first start in the 24-17 home win over the Sharks at GIO Stadium.

Brumbies head coach Dan McKellar said the side were delighted that Folau has signed a two-year contract with the club.

“He brings great energy, is very dynamic in both attack and defence and his set-piece game is developing nicely. Folau was a standout player in the NRC with the Vikings last season and he has produced that form in his first few games of Super Rugby on the back of an excellent pre-season.”

“I am very happy to have committed myself to the Brumbies and am looking forward to the challenges that lie ahead,” Fainga’a said.

“It’s been tremendous so far and I have really enjoyed my time with the Brumbies since coming to the club in pre-season. It’s a fantastic group of players and staff to work with and in Robbie Abel and Josh Mann-Rea we have two experienced hookers who I can learn from.

“The Brumbies is a special club to play for and I have been made to feel so welcome to Canberra by everyone involved and, in particular, the loyal Brumbies supporters. I look forward to an exciting future.”

The Brumbies are next in action this Saturday evening when they take on the Reds at GIO Stadium. The match will be preceded by the Buildcorp Super W fixture between the Brumbies Women and Western Australia as part of the club’s ‘Celebrating Women in Rugby’ round.

Sue Brooks - 9 minutes ago
So beautiful. Looks like a painting. View
Heather Alexander - 3 hours ago
LoveTulip Tops gardens, so glad you have posted these wonderful pictures. View
Teagan Brissett - 4 hours ago
Belinda Brissett better than nothing! View
News 50

Ashley Wright - 16 minutes ago
Julian Sortland believe already decided Canberra will use batteries rather than supercapacitors and the original vehicles are... View
Ashley Wright - 19 minutes ago
Susan Williams that’s good because light rail whilst using similar vehicles is different to a tram way in that it is design... View
Ian - 30 minutes ago
Seems stupid to me to be building this section when the government doesn't have all the approvals lined up for getting over t... View
Community 15

Linda Stapleton - 31 minutes ago
mmmm war with a magpie...so who is meant to be the superior species here? No offence meant but surely making friends with the... View
Guy Noble - 37 minutes ago
Jim Vizovitis yup play nice and they do,,,, we have had the same parents coming to us to feed there kids for years now View
Jim Vizovitis - 1 hour ago
Just get out and feed him. In a matter of days you can have them eating out of your hand. View
News 248

Leonard Kelton Smith - 1 hour ago
Very good but I hope you will go back and replace any that die. MY local council in NSW boasts about the number of trees they... View
Joy Gulliford - 1 hour ago
Christine Young true, like Northbourne Ave, chopped down 100 ‘s and planted 100’s more.😂... View
Betty Geale - 2 hours ago
What do you water them with .... View
News 16

whatwik - 4 hours ago
Ha, try NSW regional travel. Disappointing yes, but prudent. Some of us do wonder about the obsession with the ACT Chief Mini... View
Community 25

Capital Retro - 5 hours ago
The Australia Post vans deliver mail to them early in the day so that the postie bike person can use them as a suburban pick... View
Opinion 31

rspg - 5 hours ago
Bureaucracy at its worst with no concept of real world realities. When Manuka oval and st Christopher’s can’t be accessed... View
show more show less
*Results are based on activity within last 7 days

@The_RiotACT @The_RiotACT
Funds from The Better Challenge go towards fighting childhood #cancer, a disease that affects three families every day in #Australia - and Canberra's own rugby team, @BrumbiesRugby, is helping out https://t.co/oO200sxG3s (58 minutes ago)

@The_RiotACT @The_RiotACT
Support for young #Canberrans at risk of homelessness due to family conflict will be increased in the upcoming Territory #budget https://t.co/vGYvqo9ZPL (2 hours ago)