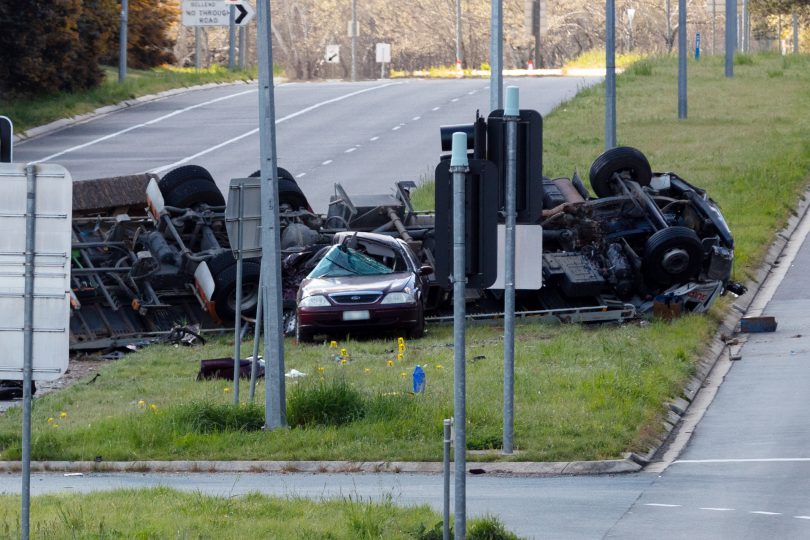 The scene of the fatal accident on the Barton Highway. Photo: Thomas Lucraft.

The tow truck driver accused of causing a fatal crash on the Barton Highway will contest the charges against him.

On Friday (19 November), the ACT Magistrates Court heard Jake Barrett, a 27-year-old man from Karabar, would plead not guilty to all three charges relating to a fatal three-car collision on the Barton Highway on 15 September 2021.

The crash, which occurred at the intersection of the northbound exit from Gungahlin, resulted in a 45-year-old man dying at the scene and a 43-year-old man suffering serious injuries.

Stephanie Beckedahl from Hugo Law Group announced her client, who did not appear in court, would fight the charges.

Prosecutor Sofia Janackovic said that while the majority of the brief of evidence was complete, there remained outstanding evidence that needed to be prepared and that process would take six weeks.

She requested an eight-week adjournment to which both Ms Beckedahl and Chief Magistrate Lorraine Walker agreed.

Police allege Mr Barrett, driving a tow truck carrying a 10-tonne excavator, ran a red light at 80 km/h before colliding with the Ford Falcon sedan being driven by the 45-year-old man.

Subsequently, the tow truck and the Ford Falcon sedan travelled 50 metres before coming to a halt, but not before crashing into a Toyota LandCruiser, being driven by the 43-year-old man. The LandCruiser was pushed a further 60 metres and subsequently rolled. The driver was taken to Canberra Hospital with serious injuries.