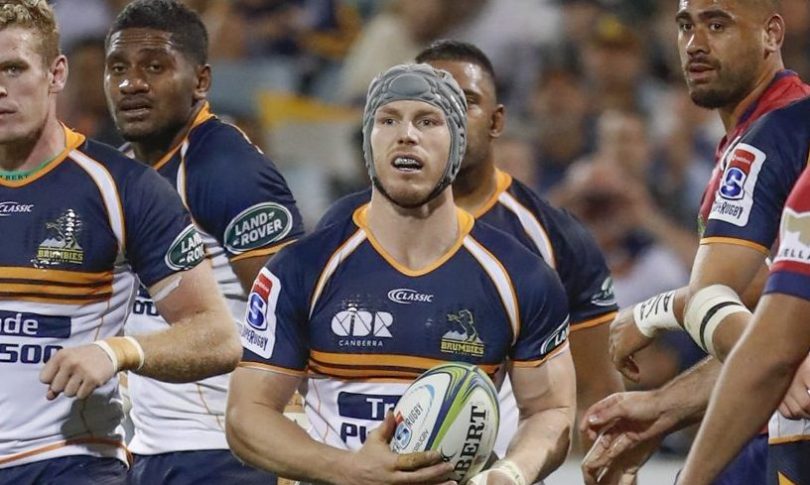 David Pocock lasted just five minutes in the Brumbies’ 2019 season opener against the Melbourne Rebels after being hit in the head. Photo: Photox.

The sight of people who are unable to function in daily life after suffering successive and debilitating concussions is what drives Professor Gordon Waddington to keep up his research.

Waddington, the University of Canberra’s Professor of Sports Medicine, is leading UC’s Research Institute for Sport and Exercise in using balance technology to help fast-track recovery from concussion, in what is believed to be an Australian first.

“Seeing people suffering from a concussion can be quite upsetting but it is one of the things that keeps me enthused to keep researching. Every day I get up, there is always more to learn,” Professor Waddington said.

“I am never going to be able to answer all the questions people have about concussions.”

But what Professor Waddington does know is that the fear of concussions is causing parents to withdraw their kids from contact sport, which is something that concerns him the most.

“We don’t have a definitive answer yet if concussions have a lasting effect, and it scares people away,” he told Region Media. “One of the things that we do know is that keeping people active and in sport is so much more beneficial than people not participating because of the number of effects that we are seeing from a concussion.

“We know that if kids are physically active during primary schools through to high school, they are likely to stay active for life.

“Unfortunately, at the moment we are seeing 80 per cent of kids active through primary school and less than 20 per cent are active when they finish high school. There are a lot of factors in that for sure, concussion fears being one of them, but it is something we need to keep working on.”

Professor Waddington said it might look like there are more concussions happening on the ovals around Canberra but that’s due to greater recognition of the issue thanks to sporting organisations creating better guidelines around head knocks.

His research is looking at whether the guidelines for returning to sport after suffering a concussion can be improved. The current guidelines allow athletes to return once they are free of symptoms after seven days, and 14 days for children.

He said the fact that current guidelines used the one measure for everybody was just too broad and not effective.

“We are trying to see that if we get better measures for an individual, so they might need two weeks while others need more time,” he said. “We can actually give you a diagnosis for recovery instead of making a broad statement about what you need.

“We want to give people individual advice about what they need to do to recover as effectively as possible.”

Dan Cope - 1 hour ago
👏 well done Emma. View
Alexandra Mary - 2 hours ago
Jaimie-Lee Peattie it is! So awesome to see more being set up View
Montana ONeill - 3 hours ago
This is good to see and hopefully it grows throughout the region to other areas💙 View
Opinion 51

Acton - 5 hours ago
Bats carry desease, shriek incessantly, spread fleas, stink, excrete copiously, but have been allowed to take over part of Co... View
kenbehrens - 8 hours ago
The Government has been keen advocates of people, especially renters, being able to grow their own food. We have a vege patch... View
jwinston - 9 hours ago
Our hospitals are dysfunctional, roads aren’t maintained and education is nearly non-existent. But let’s waste time produ... View
News 10

kenbehrens - 6 hours ago
Before I retired, I commuted to the City. Annoying but tolerable. Living in Tuggeranong, I'd be pretty annoyed if I had to co... View
bj_ACT - 9 hours ago
More employment in Gungahlin is much needed. The Light Rail is full in one direction and pretty much empty in the other direc... View
Property 25

kenbehrens - 7 hours ago
Double taxation? Stamp Duty, Rates and Land Tax aren't really double taxation! In the ACT, Stamp Duty is tax deductible due t... View
Sam Oak - 8 hours ago
Ken, so an effective tax rate of 22.5% on CGT compared to 30% on income is such a big deal? I’m also not talking about the... View
News 3

@the_riotact @The_RiotACT
We've got all the hot news in this week's newsletter - from hot property, to hot-desking. Subscribe now! https://t.co/nl4QFZTDQW (1 hour ago)

@the_riotact @The_RiotACT
The hearing for an Australian Federal Police officer accused of forcing a woman to touch his genitals has ended with his lawyer arguing there was "ample basis for reasonable doubt" https://t.co/TfE5K5Ae2H (1 hour ago)