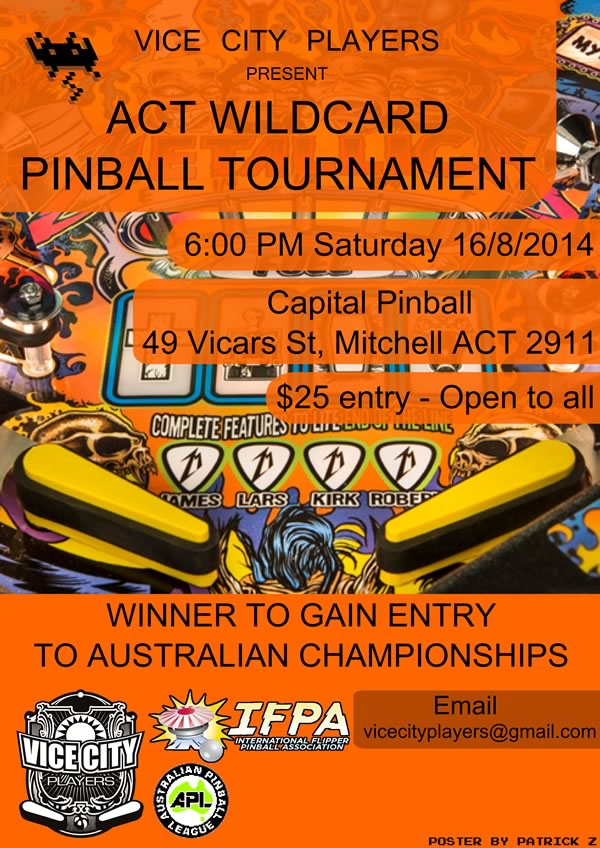 Thanks to Canberra’s VICE CITY PLAYERS, it’s your shot at qualifying for wildcard entry into the Australian Pinball Championship being held at PINFEST in Caves Beach, Newcastle on 27 & 28 September 2014.

Here’s what you need to know;

PRELIMINARY COMP GAMES LIST* is a fun combination of titles:

PLUS…first place will take home the exclusive VICE CITY PLAYERS T Shirt to wear while representing the ACT up in NEWCASTLE.

Hope you can make it for a top night of pinball & the chance of gaining wildcard entry to compete against the TOP 25 players in Oz at the Australian Pinball Championship!

Founded in January 2014, the Vice City Players is Canberra’s friendliest pinball and retro gaming group. We are registered with the Australian Pinball League and are Canberra’s only active International Flipper Pinball Association registered group.

We are committed to advancing the pursuit of leisure and friendship.

Get in touch to join us in a few games.

Capital Retro - 49 minutes ago
Will it be named after Sam Stosur? View
Community 46

Zoe Lewer - 50 minutes ago
Bob Foster yep. Us humans sure have made an impact. We are the problem. You are right. The day the people who were invaded ch... View
Joy Gosden - 57 minutes ago
Yes. What were they thinking planting them in our suburbs. They drop limbs attract pests and stop grass growing around them.... View
Bob Foster - 1 hour ago
Another deluded hypocrite post Zoe Lewer 😂 I'm betting you live in a man made structure....made with either cut down trees... View
Opinion 64

Chris Montgomery - 51 minutes ago
Brian Ashcroft they only blow over cause their root system is higher than they should be. Most eucs that blow over are on fro... View
Chris Montgomery - 57 minutes ago
Gertraud Bell All the big Eucalyps were there before all the housing went in. So??? your saying to remove all native trees an... View
Mark Gledhill - 2 hours ago
how long will the eucalypt hate continue? this sounds like treescrimination to me! View
News 46

phydeaux - 58 minutes ago
Buy the way TheSilver, I nearly forgot to mention this with regard to your supposed other scenario https://pubmed.ncbi.nlm.ni... View
phydeaux - 1 hour ago
A few points if I may, starting with your first post in this sub-thread where you start: ".... is literally no good evidence... View
TheSilver - 5 hours ago
Yes, I'm aware there are observational and laboratory studies. I am sceptical of those because it isn't obvious how transfera... View
News 1

@the_riotact @The_RiotACT
The ACT has recorded 620 new cases of #COVID-19 in the 24 hours to 8 pm yesterday. Of those, 61 people are in #hospital, with five in #ICU and one person requiring ventilation https://t.co/yrOFhW3j7d (47 minutes ago)

@the_riotact @The_RiotACT
#Moncrieff residents are pushing for the ACT Government to remove a #smelly and hazardous 'sludge pit' from their backyard. The petition has already attracted more than 400 signatures https://t.co/fW6ONtnb5f (53 minutes ago)