Wallagoot Lake shrinking as the hot days of summer get closer 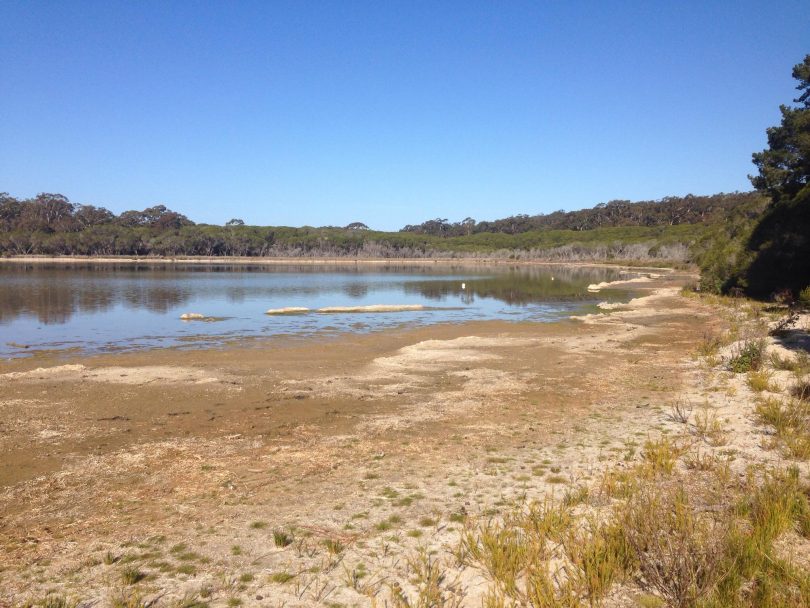 Locals think that Wallagoot Lake is the lowest it’s been since 2010. Photo: Luke Brown.

Concerns for the health and future of Wallagoot Lake have arisen following February’s large fish kill, with water levels in the lake now at their lowest since 2010.

“In 2010, Jack Miller, who was principal of Bournda EEC from 1976-2002, saw the water levels and said he’d never seen it that low,” Doug says. “Now we’re seeing those levels, and possibly even lower, eight, nine years later.”

Wallagoot Lake, between Merimbula and Tathra, is fed only by Moncks Creek, which has no substantial flow and has not been open to the ocean since 2012, making it prone to evaporative losses.

Nick Yee, Principal Environmental Scientist with Elgin Associates in Bega, has been employed by Bega Valley Shire Council to sample the water at Wallgoot on and off since 2010.

Nick and his team were on the water sampling by 6 pm on February 11, the day the fish kill hit the news.

“The fish kill was caused by low oxygen levels, with a few factors at play,” Nick explains

“There was an algal bloom and the algae had died, so bacteria breaking down caused lower than usual oxygen levels.

“The water was also warmer than usual and warm water holds less oxygen. It was hotter than we’d ever measured by over a degree – 24 degrees at the bottom of the lake, like a bath.”

Many people think of Wallagoot Lake as a shallow lake, Nick says, but its depth is 11 metres in places, in comparison to Merimbula Lake which has a maximum depth of 5-6 metres.

Because of the depth of the lake, temperature plays a key role in the oxygenation of the lake, Nick explains.

“Winds across the surface are only effective at 3-4m in mixing the water so cooler temperatures in winter are crucial for replenishing the deep water. The surface water gets colder and denser until it sinks and effectively ‘flips’ the whole lake, in a process known colloquially as ‘turnover.”

Ammonia produced by decaying sediment could also be a factor in the fish kill but it is as yet unknown, Nick says.

Lower water levels are common in summer when evaporation is highest, a concern given the state of the lake now with the warmer days of spring and summer so close. 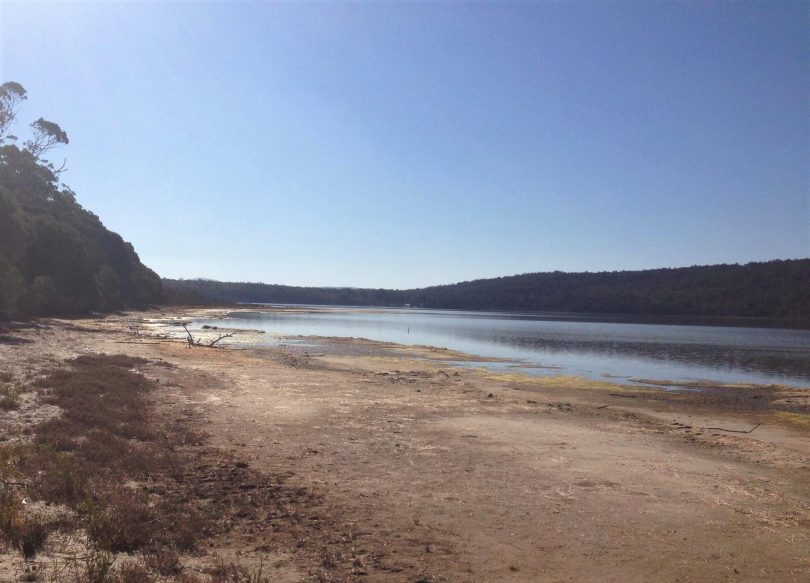 Although Wallagoot Lake is known as a shallow estuary, it is actually extremely deep – up to 11m – in places, Nick Yee says. Photo: Luke Brown.

“The lake is getting salty, it’s often much saltier than the ocean,” he says, “but there is no evidence that the species that died in the fish kill can’t tolerate salty water.”

Another unknown is if fish kills have happened before in the lake. Nick suspects that they have, though there are no modern reports.

“In the deep sediment, I’ve seen layers of dead cockles and shellfish and of course, low oxygen levels don’t just kill fish, they kill everything. But we don’t really know how often it’s occurred.”

The health of Wallagoot Lake effects our local food sources and recreation opportunities, with fisheries stocking the lake regularly with prawns.

“Fisheries won’t risk the cost of prawns if they think conditions could deteriorate again,” Nick comments.

Doug Reckord says estuaries are known for being sensitive and vulnerable but they are more at risk due to the effects of climate change.

“It’s all been predicted – in a warmer, drier climate the lake will evaporate more so that what Jack saw once in 35 years, we might see every 8-9 years.”

According to Doug, what humans do in the catchment becomes more important under these conditions, a note for the summer ahead.