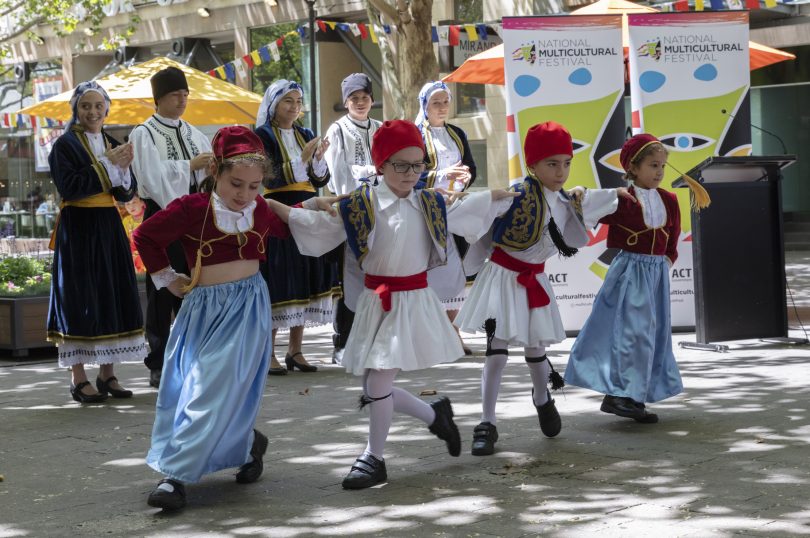 Young performers go through their routine at the launch of this year’s Multicultural Festival in Civic. Photos: Thomas Lucraft, Region Media.

Patron of the ACT Chinese-Australian Association Sam Wong said the Chinese community will be with Canberra in spirit despite the absence of the China stage at this year’s National Multicultural Festival.

The festival runs from Friday, 21 February to Sunday, 23 February at various sites around the city.

At the launch of the 24th Multicultural Festival in Civic today (14 February), Minister for Multicultural Affairs Chris Steel said Canberra is proudly a multicultural city but is not immune from events of the world like the outbreak of coronavirus disease (COVID-19), and that the festival would go ahead.

“The National Multicultural Festival will be a safe place for people to visit and we’re expecting, once again, to have around 200,000 people visit over the three days,” Mr Steel said.

“We stand in solidarity with the Chinese community here in Canberra who have been going through a difficult time with the coronavirus.”

A number of high-profile Chinese performers and volunteers and community groups have been unable to participate in this year’s festival as they visited friends and family in China during the Chinese New Year period and have since been quarantined.

Mr Steel said the Chinese community has been a part of the festival since it began and that will be celebrated as a feature of next year’s 25th anniversary of the event that brings about $10 million to the ACT economy each year. Chinese performers and food stalls will still be present at the festival.

“The advice from the Chief Health Officer of the ACT is that Canberrans should feel safe at the festival, and at this stage, no additional measures are required,” Mr Steel said.

Mr Wong lamented at the Chinese community not being able to extend its usual presence at the festival. 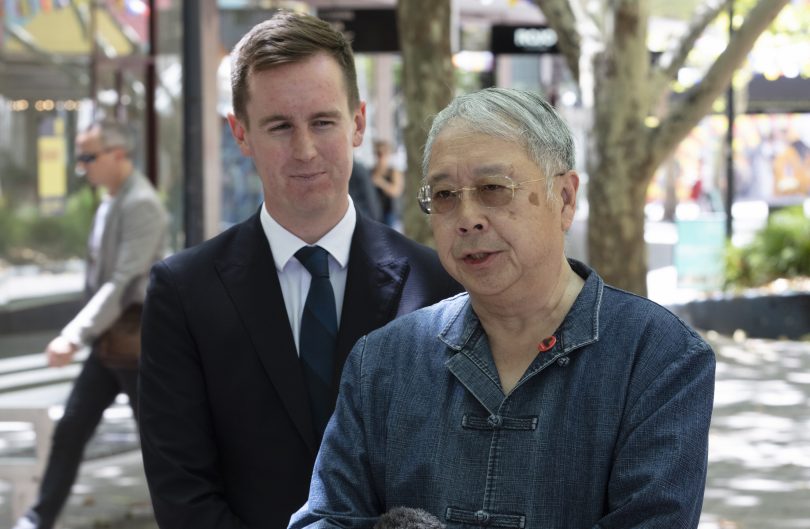 Patron of the ACT Chinese-Australian Association Sam Wong and Minister for Multicultural Affairs Chris Steel at the launch of the Multicultural Festival in Civic.

“We have difficult times,” Mr Wong said. “Visitors from China will be unable to visit Australia and Canberra because of the impositions of the quarantine that has been issued.

“We also have families and friends from Canberra still in China that need to be quarantined as good citizens. We are very sorry we can’t participate in full; however, we will still have the Chinese-Australian Association and many others participate, but not in our usual big numbers,” Mr Wong said.

“I think this will pass over as there are no cases of the virus in Canberra and the Government has been in communication daily via a bulletin to the Chinese community in Canberra about the status of the coronavirus.”

Mr Steel said it will be interesting to see what the outcome is in terms of numbers at this year’s festival as the result of a challenging season for community groups in Canberra. 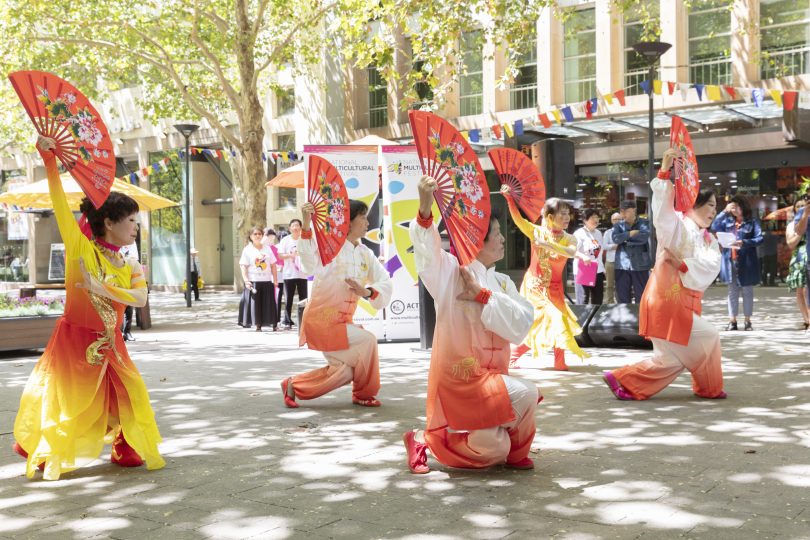 Performers at the launch of the Multicultural Festival in Civic.

Canberrans can still look forward to performances from headliners Vanessa Amorosi and cooking demonstrations from chef Adam Liaw, as well as many community groups proudly sharing their diverse culture.

The Festival’s entertainment program will run across six stages and includes food, live music, dancing and performances from every corner of the world. This year, Glebe Park has been added to the Festival’s footprint with stalls and activities for kids and families on Saturday and Sunday.

“The National Multicultural Festival is an important part of Canberra’s history and we are planning for special 25th birthday celebrations next year and enhancements to the festival beyond,” Minister Steel said.

Transport Canberra will run increased services across both bus and light rail networks to ensure people can travel to and from the festival. Additional light rail services will be in place on 22 February with increased rapid bus services on 22 and 23 February.

More information including the entertainment program and list of stallholders is available on the Canberra Multicultural Festival website.

Capital Retro - 2 hours ago
So, it will be called the "Opal of Colour"? Ridiculous.... View
Andrew Dale - 10 hours ago
Rory Bourke I'm both mate 🥸🥴 View
Lucas Anasdow - 12 hours ago
The Left are pushing to have the Event Renamed as the Term 'Black' is deemed to offensive and upsetting for segments of the C... View
News 32

Ashley Wright - 4 hours ago
Jennie Smith vast majority of the tram works were done in the median strip of flemmington road with minimal impact. There was... View
News 5

sisyphus - 5 hours ago
Better still, read some up-to-date peer-reviewed research. That film is primarily attacking historical straw men, presenting... View
jwinston - 12 hours ago
Watch “The Planet of the Humans”, a documentary by Michael Moore, to see the lie of renewables and so-called green energy... View
News 4

JC - 5 hours ago
Actually think you will find this “outcome” actually backs up my comments. Do you think both parties came to a $400,000 a... View
chewy14 - 6 hours ago
JC, The other week you were claiming the silence was due to pending litigation which now as we see (and I said) was false. Th... View
JC - 7 hours ago
Life doesn’t work like that. It’s quite clear that for the last year they have been in dispute with the builder over this... View
Community 20

@The_RiotACT @The_RiotACT
Spacey Jane returns to Canberra this weekend, playing two massive shows under the lights of the @canberratheatre. Find the details in this week’s #GigGuide, which features all the best shows in town https://t.co/MNHOt93RAV (2 hours ago)