What to do when millipedes attack? 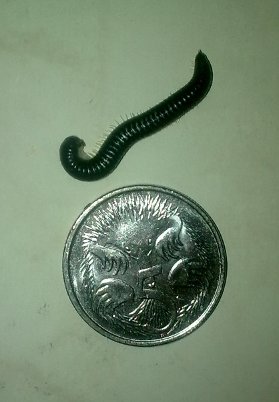 Dvaey has sent in this photo of what he thinks are “black worms” but which I can confirm are in fact millipedes. He also sent this note:

Recently Ive noticed swarms of these little black worms appearing around our house. At first we’d find a couple of them dead in dark corners, but in recent days theyve been appearing by the hundreds, usually in the evenings around outside lights. They seem to prefer sticking to concrete instead of bricks or windows, and they love hanging under the eaves.

Any advice on what these critters are, and if theyre something to be worried about or just part of a cycle of nature with the wet weather we’ve had lately?

12 Responses to What to do when millipedes attack?
Filter
Showing only Website comments

Wow, you have the same problem as do, we just had a few here and there where you mentioned and now we are getting more, mainly on the tiled floor, and just outside near the sliding door on the concrete, but they’re not just in those places all over the house, which is kinda creepy cause in the morning theres more then what you saw the night before. I thought our house may have been built on top of some millipede sanction, guess not. Im sorry but I have no clue either what the go is with these millipedes, im assuming weather too, do you also live in the Conder area?

Get a dog. One of mine used to eat them. Then she had purple saliva.

Argh, they crunch unpleasently when you accidentally step on them too. Still, at least they don’t fly at my face whilst I am sitting innocently on the couch like the over-sized crickets which are also lurking in my house defying my attempts to catch them.

i, for one, welcome our new arthropod overlords…

The concrete before our front door is now the site of a millipede Armageddon thanks to surface spray (Coles brand, the one that says will kill millipedes) >-)

Unfortunately, the more resistant ones still get through, though most of these end up dying near the doorway. Still, better than being unexpectedly surrounded by 15+ of these critters when I’m watching TV at night.

i, for one, welcome our new arthropod overlords…

Oh man, millipedes! When I bought my house some years ago, the front garden was heavily mulched. I moved in in February. Six weeks later it rained for a couple of days – and the entire front of my house was covered in swarming millipedes. It is an old house, so they invaded the house through every tiny crack and cranny, including in waves under the front door.

It took a pest controller two goes to get the numbers down to manageable levels, but he warned me that they would breed up again in the mulch. He was right.

Now that the mulch has finally rotted away (never to be replaced) I still get a few every autumn – first ones a couple of nights ago in fact – but spraying plenty of Baygon outside around the doors, windows and front verandah every couple of weeks kills them before they get inside.

I know they are harmless, but the sight of huge numbers swarming over and into your house is like a horror movie. When it first happened, I didn’t know what they were, and was scared stiff!

They’re millipedes. They are tiny and harmless and will go away when it cools down.

If you can’t wait that long use a pyrethrum based surface spray. At least then any birds that eat them won’t be ingesting a dose of toxic chemicals.

The CSIRO has this to say about them.

Nasty little buggars. The more mulch you have in your garden, the worse they get.

Also extracted from elsewhere on the web:

Chemical control
Chemical barriers at least one metre wide present millipedes with a treated surface wide enough to kill them before they enter a house. These pesticides have a limited active life and must be re-applied for ongoing control – especially during periods of rain. Chemicals can be applied to outside walls, paths and garden beds or other areas where millipedes are thought to breed. The following chemicals are currently registered for use against millipedes;
• Bendiocarb (Ficam®)
• Carbaryl (Carbaryl®) Agchem Carbaryl 800 WP
Insecticide®, Agchem Carbaryl Insecticide Spray® or Agchem Carbaryl SC Liquid Insecticide®.
• Cyfluthrin (Baythroid®)
• Propoxur applied to doorsteps and window ledges, for example, Baygon Household Insecticide Surface
Spray®.
• Pyrethroids have little residual effect and should be sprayed directly onto the millipedes. Many brands of domestic insect sprays contain Pyrethroids.
Disclaimer: Chemicals must be used in accordance with instructions on the label. Mention of trade names does not imply endorsement or preference of any company’s product by the Department of Agriculture, and any omission of a trade name is unintentional. Recommendations were current at the time of preparation of this publication.

We went for a walk up Coolamon Ridge at the back of Chapman on the weekend and noticed that the hill was covered in them! At the top near the trig station the large flat rocks had thousands of them all over, and they were all over the paths too! But, once you were off the very top they disappeared.

I’ve also had hundreds of these dead critters outside by back door last week. Used to happen intermittently when I lived in Ainslie as well.

Tim Hough - 7 hours ago
That's some crazy conditions. I'd only find them borderline acceptable if we were guaranteed a Matildas match, but even then... View
Property 17

Tom Rilly - 10 hours ago
Why should the govt step in just because a developer stuffs up??? View
Lifestyle 31

Rob Thomas - 11 hours ago
Gabriel an Australian politician? Oh he probably is. View
Russell Nankervis - 13 hours ago
Lol a Liberal saying others are killing democracy. How ironic. View
Charlie Church - 13 hours ago
Sheridan New honestly would trade it for anything right now. View
News 4

Murray Emerton - 11 hours ago
Why can’t we get direct flights from Canberra to cairns. I would be on that!!!! View
News 14

chook58 - 13 hours ago
The RIOT article is more propaganda by the ACT Government. As a front-line protester and eye-witness there is nothing "humane... View
Community 1

@The_RiotACT @The_RiotACT
The Liberal and Labor candidates are neck and neck in Eden Monaro as the vote goes down to the wire and preferences run wild https://t.co/dG673PvvM6 (6 hours ago)

@The_RiotACT @The_RiotACT
Local jewellery designer Krystal Hurst is a proud Worimi woman who uses her creations to provide a sense of freedom and to connect with her culture and ancestors. She is a finalist in the Telstra National Aboriginal and Torres Strait Islander Arts Awards https://t.co/MtPLGJ3WwH (8 hours ago)

@The_RiotACT @The_RiotACT
Canberra's residential property market has posted a 6 per cent rise in home values for the financial year despite the COVID-19 economic downturn, according to the latest data from CoreLogic https://t.co/wYoWLboKSL (10 hours ago)