Who are Slagatha Christie and why are they so important? 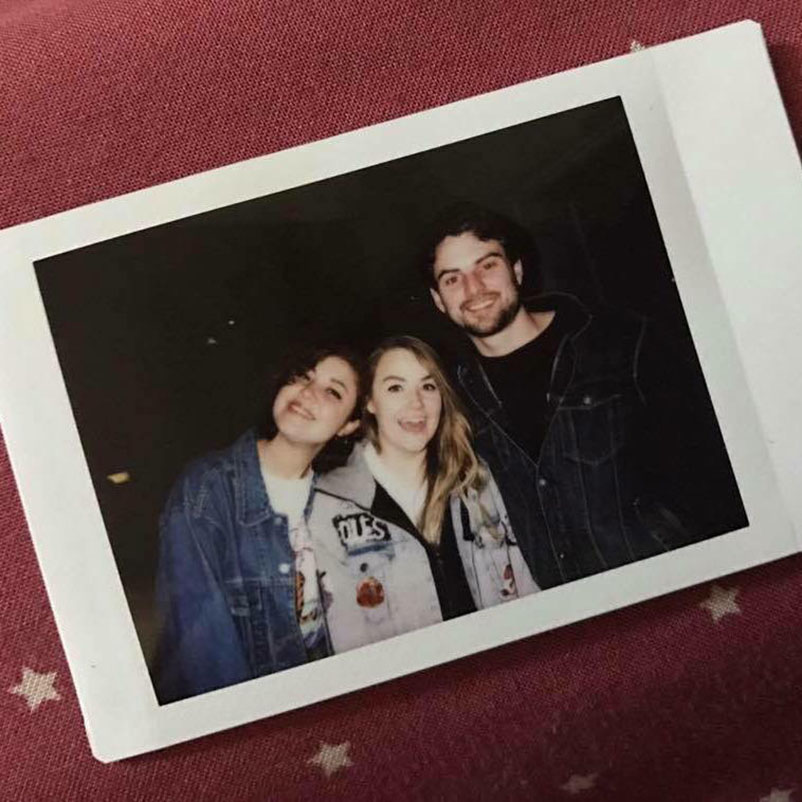 Slagatha Christie are leading the way as one of Canberra’s most beloved bands. Photo: Alice Worley.

There’s a line at the beginning of Slagatha Christie’s ‘Salad & Boy Problems’ that goes something like this: “I read on the internet that salad makes you smaller / so I ate some but you still found me.” It’s the kind of lyric that comes back to you, and by the time you feel the sinister edge to it, the song is already two choruses deep, continuing unabated into deeply dark, socially conscious territory.

“That one was the first song we ever did,” says Kate Lawrence. She’s one of Slagatha Christie’s two singer/guitarist/bassists and we’re catching up for coffee in the city before she heads off to her part-time job. “It’s about this dude who went to my college who used to just take advantage of girls that were much younger and drunker than him. But it’s also really fun and really easy.”

The song is representative of the band’s approach to, well, being a band, and their DIY ethos is something they’ve had since the beginning. Hell, it was their beginning.

“Actually, do you remember Hallucinatorium?” says Kate when I ask her about how it all started. “I saw Jess [High, vocals/guitar/bass] as the frontlady for that band and I was like ‘oh, I want to play music with her’. Then we got Stephen [Watson, drums/vocals] involved. He hadn’t played drums before playing with us and we were kind of like ‘Stephen, do want to come and learn to play drums with us?’ We all kind of learned to play instruments together which was really nice. I suppose that’s why it surprises me we got any attention at all, because we didn’t know how to do anything.”

Now joined by Azim Zain on guitar, that sense of surprise and fun is all part of the band’s narrative. And even though they might not say it themselves, they exact a lot of control over what they do. It’s the deliberate way Stephen continues a drum pattern over an earnest bassline, and the way that Jess and Kate’s vocals become more and more wild as a song goes on. Everything Slags do is part of their story. 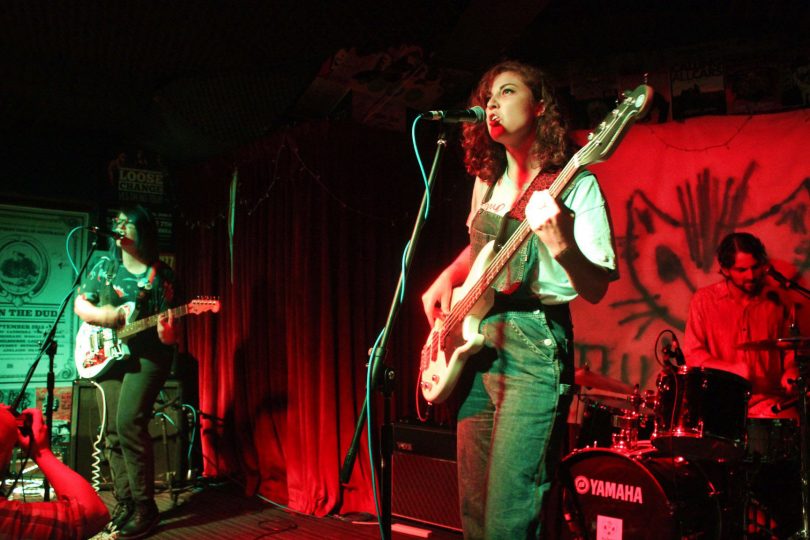 All this meshes spectacularly with their stage presence, whether in the form of leotards bearing the faces of morally bankrupt political leaders or the use of a Spongebob Squarepants guitar that’s lost nearly 50% of its strings.

“That was my first electric guitar,” says Kate. “It was $90 because I wasn’t about to spunk a grand on a decent guitar and then work out that everyone hates our music and I hate playing guitar. There was very much room for it to go wrong, which is why I had a $90 Spongebob guitar.

“I think what happened was we’d go ‘ok, this is going to be a really serious song about, I dunno, climate change?’. We would then just be so stoked to be playing at all that it would just end up looking like we were having a lot of fun with a song about wanting to die. So I think the fun kind of reflects that we were having fun together and got to be playing music with friends, and maybe we should be treating the subject matter a bit more seriously.”

And that’s exactly what makes Slagatha Christie’s music vital. Where so many of their peers use punk music for self-serving or self-indulgent reasons, Slags’ distinct lack of manufactured punk attitude makes them stand out in the best way possible. But at the same time, it’s unfair to compare Slagatha Christie to anyone, or rather, to describe them by comparison. The only way to really ‘get it’ is to dance wildly in the front few rows at a show while Slags rock out on stage singing about warm beer and trains. And then later that night you’ll sit up in bed and think to yourself: ‘Hang on a second. That song wasn’t actually about salad.’

It reminds me of something the band said late last year, and I ask Kate whether they still think the same way – whether they consider themselves a ‘real band’ yet, whatever that means.

“We’re getting there,” she says. “I think our increasing indignance at being treated as some novelty female band means we’re higher up in our estimations than we used to be. So we’ll kind of get mad when we find out someone got paid 100 when we got paid 50, because we know people are coming to see us now. We’re slowly approaching it. We’re creeping up on it from behind. We’re gonna get it.”

Have you seen Slagatha Christie yet? Catch them on Saturday April 14 at Transit bar with Clove, Speakeasy, and Elk Locker. Tickets are $10 at the door. Entry from 8 pm.

Ken McInnes - 2 hours ago
Great people great coffee always a smile just a happy place. Well done it’s always nice to see a family working together da... View
Neridah McMinn - 4 hours ago
My absolute favourite place for a Saturday morning breaky 💕 View
Graeme Jeffries - 4 hours ago
I always stop there for a great coffee and toasted cheese and tomato sandwich. A friendly place and service with a smile! May... View
Opinion 2

Ol L - 3 hours ago
People are saying in other posts that dual occs fix this. No they don’t. A house near us was rented for $500 per week. When... View
Peter Curtis - 17 hours ago
Nick Savino it’s literally a ballot it’s depressing View
News 83

Jo Hann - 4 hours ago
Nada Krstin and, addressing your query as to whether they're qualified, there's no cognitive test either. We do not deem an e... View
Jo Hann - 4 hours ago
Nada Krstin there are 16 and 17 year olds who earn over $18k. The potential to pay tax is all that should be required, though... View
Nada Krstin - 12 hours ago
Jo Hann see my recent post to reply to your "if you pay tax, you should have an option to vote for the government that spends... View
News 26

assiduous - 4 hours ago
The predictable consequences of ACT government policy of not supplying the market with land on which to build housing in an e... View
Patrick Rezek - 6 hours ago
Maybe they can sleep on that little Lake extension that’s being built now at Acton. There is $$$ for that. Remember folks.... View
Savita Ubhe - 9 hours ago
Joel Suryawanshi wow domestic violence seem to be a huge issue there. Sad! View
What's On 17

@The_RiotACT @The_RiotACT
Spend some time with Emily Brindley from Sweet Bones Bakery Cafe in #Braddon & find out her tip for feeding unexpected guests https://t.co/vhYFYG9OJA (20 minutes ago)

@The_RiotACT @The_RiotACT
The Burns Club's plans for a new car park has run into trouble with @LittleAthsACT. Find out what's at stake https://t.co/FAlqC45VWK (3 hours ago)