Who is Lady Denman? (the band, not the drive or the dame) 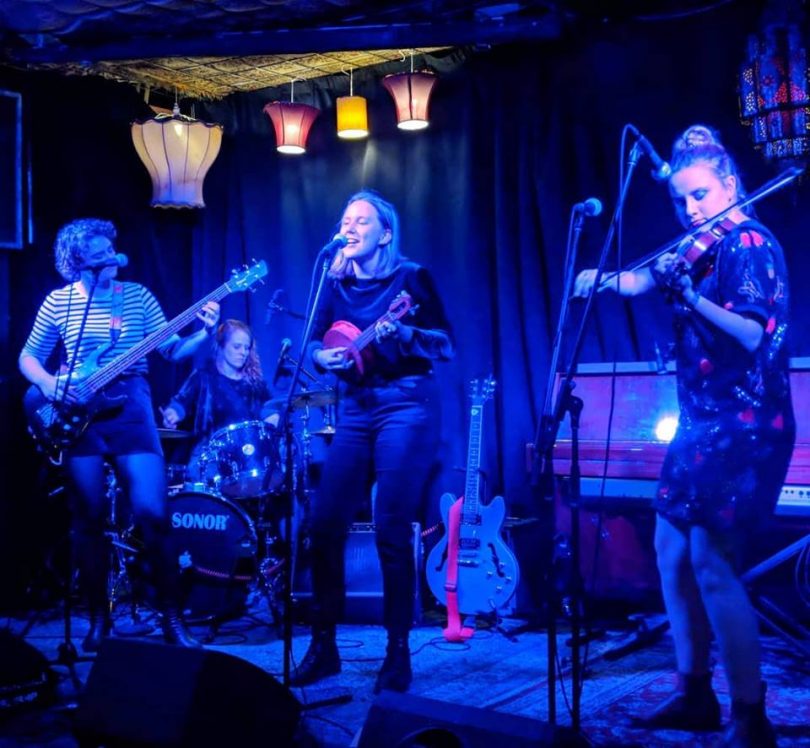 Here are the first three suggestions that pop up when you type ‘Lady Denman’ into Google:

For Jayne Hoschke, Ella McNiece and Flo Verity, three Canberra women and passionate musicians who make up local band Lady Denman, having the band name rank so highly and in such company on Google’s search engine is a little staggering.

But that wasn’t the motivation. The band’s namesake, Lady Gertrude Denman, the wife of Australia’s fifth Governor-General, just seemed a perfect fit for a Canberran, all-female band.

“We wanted a name for our band that said ‘women are great’ and ‘Canberra is great’ and Lady Denman just fitted the bill,” Jayne said. “A friend suggested it and we looked up who she was and she was a women’s rights advocate and she named Canberra. It was perfect!”

Their music is inspired by their different musical backgrounds: Jayne, the lead singer plays the ukelele and loves Kylie Minogue; Ella, a classical violinist with a jazz-blues voice; and Flo, who only started playing bass last year.

“If we were all into the same style, we might not get so much out of it. It stops us from falling into the trap of becoming just another band with a guitar, bass and drum,” Flo said. “It pushes us to new ideas.”

With their eclectic talents and groovy tunes, the trio made its entry into the local music scene late last year. Now, there is not a weekend that goes by when you will not hear them at a gig around Canberra.

“Writing music with people from different musical backgrounds is a lot of fun,” Ella said. “We all bring our own strengths to the band and we just listen to each other.

“We come with our own different life experiences but we come together and realise we are going through similar stuff. Our songs just come from our own mini psych sessions with each other and we share our emotions and feelings through music.”

It is safe to say that Lady Denman is like no other band you have heard before. With a quirky and cheeky style, their array of songs bursts into lines of Portuguese, shares the pros and cons of dating a poet and tells the horrifying moment someone laughed at their leopard skin underwear.

“It is tiring because we are balancing work or study while we are playing, but the flip side is that I couldn’t imagine not playing music,” Ella added. “It is kind of this cool double life we live. I can walk out of the office to go and play a gig.”

The trio is still figuring out what genre to call themselves, with songs that bring their grungy, rock side out while mingled with a folk, indie emphasis. With honest and open lyrics, smooth tones of the violin, the twang of a ukelele and guiding sounds of a bass, one thing is for sure: these three ladies are cruising down success drive.

Brindie - 12 minutes ago
If paid parking was introduced at this venue, users would simply park their vehicles in the nearby streets of Wright and then... View
enjayjay - 1 hour ago
Have you been there? Its would have more participation than ANY other sport in the ACT - every single day - not just weekends... View
enjayjay - 2 hours ago
Have you even been there? Thousands of people use it every day. It draws people from all over australia and contributes milli... View
Sport 1

mathiaseverson - 15 minutes ago
Great to have Bayley as part of our team here in CBR and representing us in Poland! View
Opinion 94

@the_riotact @The_RiotACT
The ACT has recorded 24 new #COVID cases - the same as yesterday. Earlier this morning, Federal Health Minister Greg Hunt announced that 70 per cent of the eligible Australian population was fully #vaccinated https://t.co/6nHVps2YUs (38 minutes ago)