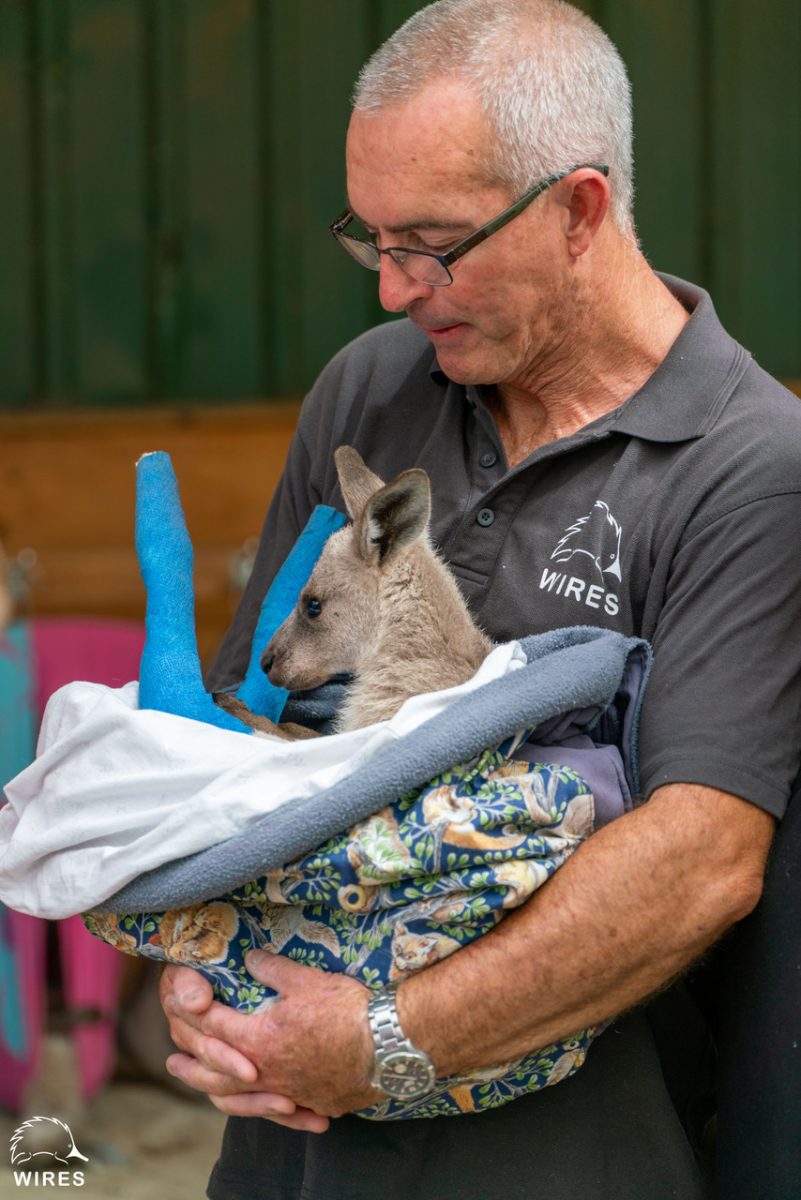 WIRES carer Kevin Clapson with a grey kangaroo joey, named Qantas, whose legs were badly burnt in the past summer’s bushfires. Photo: Supplied.

It was a heck of a summer for WIRES as the NSW volunteer wildlife rescue organisation, which has always operated on a shoestring budget, was called to respond to statewide bushfires on a scale no-one had seen before.

It was also the summer when WIRES gained international recognition after former US president Barack Obama tweeted during the bushfires, asking the world to support the organisation’s work.

“We were accused of spending money on advertising in the US, but people were actually paying to have billboards erected,” says a WIRES spokesperson.

With news that as many as one billion creatures had died in the fires, donations flowed in, with several high-profile contributions from celebrities such as Leonardo DiCaprio adding to the international drive to save Australian animals.

A few months since the bushfires were extinguished, some pertinent questions remain. Is the rescue effort over? Are animals returning to the burnt bush? How many animals survived?

Along with providing support for individual carers who lost infrastructure in the fires, and setting up emergency funds for future disasters, WIRES can now fund research to help answer these questions. 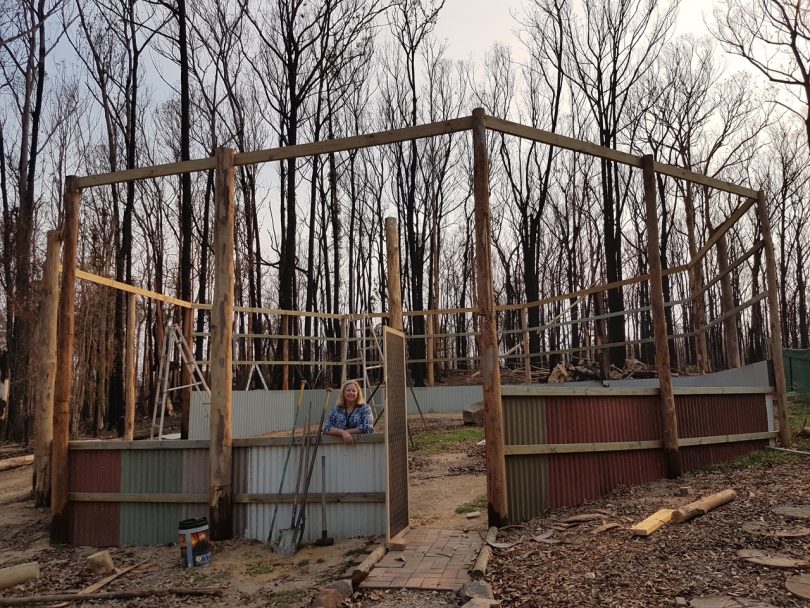 WIRES emergency response coordinator Lucy Clark is one of a team of four, including macropod specialist Slade Macklin, who were in parts of Dampier State Forest and Deua National Park last week using a heat-sensing drone to observe if animals are returning to burnt bush.

“We’re using a fire-intensity map to locate potential refuge sites – pockets of bush that have retained some green canopy we think animals may return to first,” explains Lucy.

The work isn’t easy. The crew has to work between 2 am and dawn to ensure temperatures are consistently cool enough to detect animals.

“I’m so tired,” laughs Lucy. “But when we get out there, it’s pretty exciting. We can pick up really tiny marsupials. But obviously, the bigger the animal, the easier it is to sense. It also depends on how open the terrain is.”

Statewide, the crew has picked up returning kangaroos, koalas, possums, gliders and birds. This week, in the Eurobodalla Shire, they have seen dozens of macropods, and on one night, eight gliders.

“It was a hub of activity the night we saw the gliders,” says Lucy. “We think some of them might have even been greater gliders, which are listed as endangered in this area.”

The gliders may have been in the area feeding on bugs which live on sprouting eucalyptus leaves, adds Lucy. 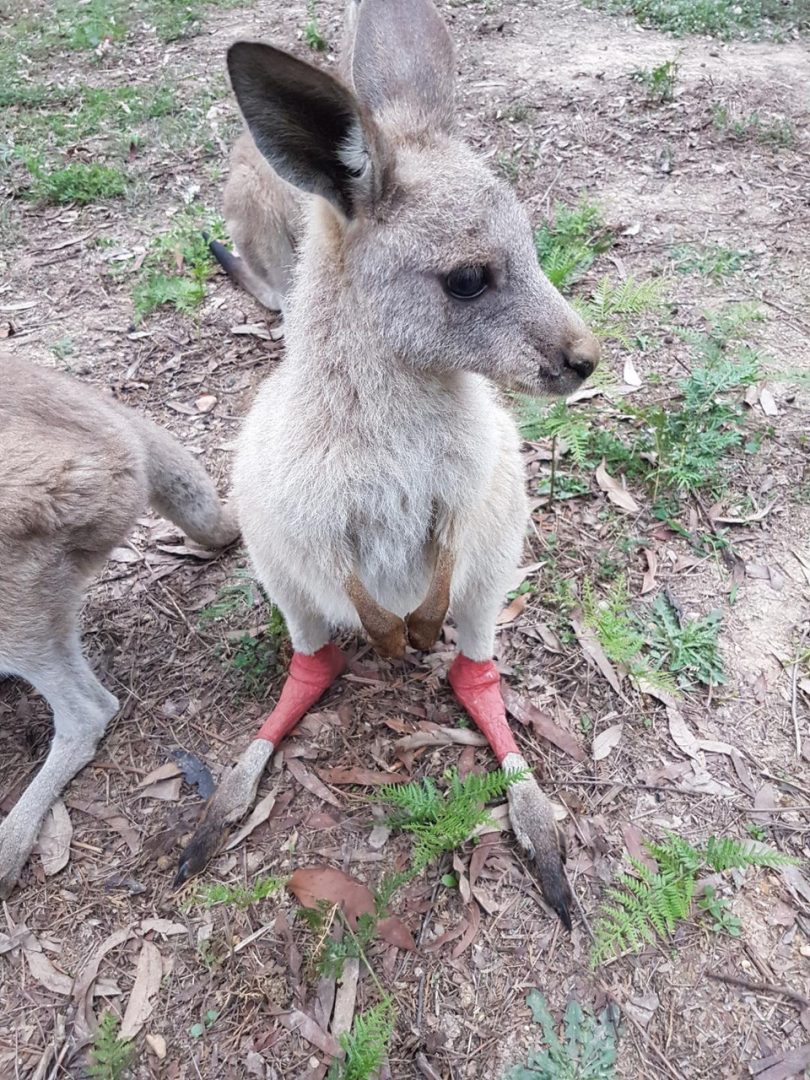 Joey kangaroo Qantas is recovering from burns sustained during the past summer’s bushfires. Photo: Supplied.

“This really highlights how important these lower-impact burnt areas are in supporting the animals that are in the area,” says Lucy.

Preserving any remaining habitat to help animals recover is a key priority for Lucy and her team, as is making sure they are even more prepared to respond on a national scale next time a disaster such as a bushfire occurs.

“We’ve learnt so much from this going into next fire season,” she says. “Thanks to the generous donations WIRES received this summer, we’re now able to put together a rapid response team which can be deployed anywhere in Australia.”

For more information, or to donate, visit WIRES.

Bob Jones - 2 hours ago
Deb Wheare And Lynne Meredith... I've heard because of the more right someone who identifys as being an Aboriginal or Torres... View
Kev Martin - 12 hours ago
I find If you stop breaking the law, you don't get locked up View
Deb Wheare - 23 hours ago
Jacob Torresan face palm View
Property 14

Pari Gilmour - 13 hours ago
I support a burnout pad. Zero interest myself but obviously these guys need a social space to do their thing. Happy to suppor... View
Opinion 33

The long-delayed Dickson shops development may finally get off the ground by autumn with Coles finding a new partner to...
Food & Wine 108

@The_RiotACT @The_RiotACT
From exquisite handmade jewellery to high-end homewares, there’s no end to the tantalising treasures to be found in the shopping paradise of Bungendore https://t.co/2kwXuEVseH (3 hours ago)

@The_RiotACT @The_RiotACT
Book a seat for Kambri Film Fest 2021, a free festival that celebrates and elevates the contributions of creative women in the film industry https://t.co/5oivpfnWaq (13 hours ago)