Experts in buying, selling & renting
Your property, your future
13 November 2021 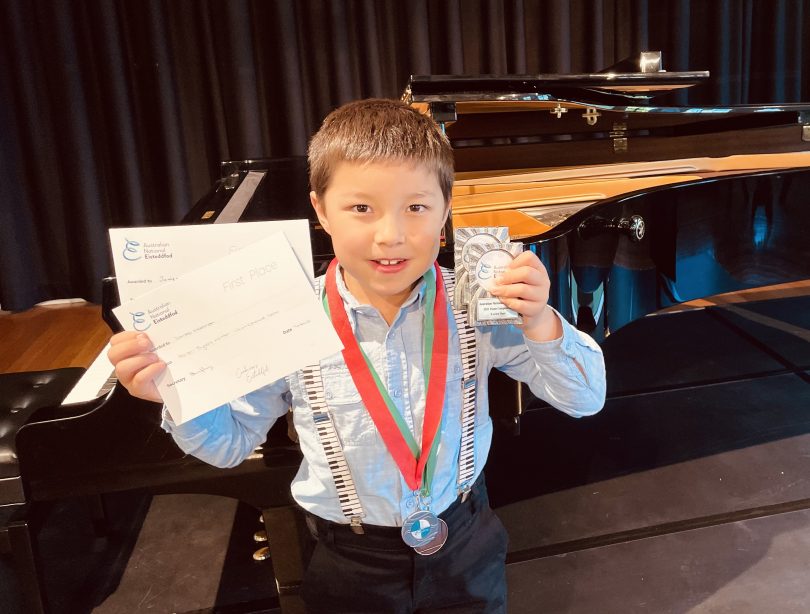 James Neeman, from Ainslie School, took out first prize in the eight and under division for piano solo and piano duet categories at the Australian National Eisteddfod. Photo: Dr Stephanie Neeman.

Like most eight-year-olds, James Neeman loves computer games and sport – just so happens, he’s also extremely talented on the piano and at chess.

The Ainslie School student took out first prize in the eight and under division for piano solo, and backed up to win the piano duet alongside his six-year-old partner Audrey Lu at the Piano Eisteddfod, which is part of the Australian National Eisteddfod, on 9 November.

The Piano Eisteddfod is a youth piano competition run annually, that invites any pianists 18 years and under to enter.

With two professional concert pianists as parents, it would be easy to write James’ talent off as simply good genetics but mum Dr Stephanie Neeman says there’s more to it than that.

“It’s a combination of growing up with music at home, obviously he has the ear for it, but I think many times people tend to forget that playing music excellently is mostly really hard work,” Ms Neeman said.

To make James’ achievements even more impressive, he started playing the piano only recently.

As a result, Ms Neeman says he wasn’t necessarily playing the most difficult piece. Rather, the adjudicators said, it was his ability to “really perform” the music that separated him from his competitors.

James didn’t have too much to say about his two impressive victories at the competition.

“I am very happy to have won the prizes,” he said.

“I worked very hard preparing for it and I had to play the pieces five times a day.

“I won first prize in the duet section together with my duet partner Audrey Lu. It was really fun playing with her. She is six-years-old and can play very hard pieces.”

While his parents are pleased he has taken a keen interest in the piano at a young age, Ms Neeman says there’s no pressure for him to continue with it as a profession as she and Dr Edward Neeman have.

“Whether he’s going to be a professional musician or not is definitely up to him,” she said, “but I think it’s definitely something we will help him with and, if he really enjoys it, we will definitely make sure he has the resources to just keep going and keep playing the piano.”