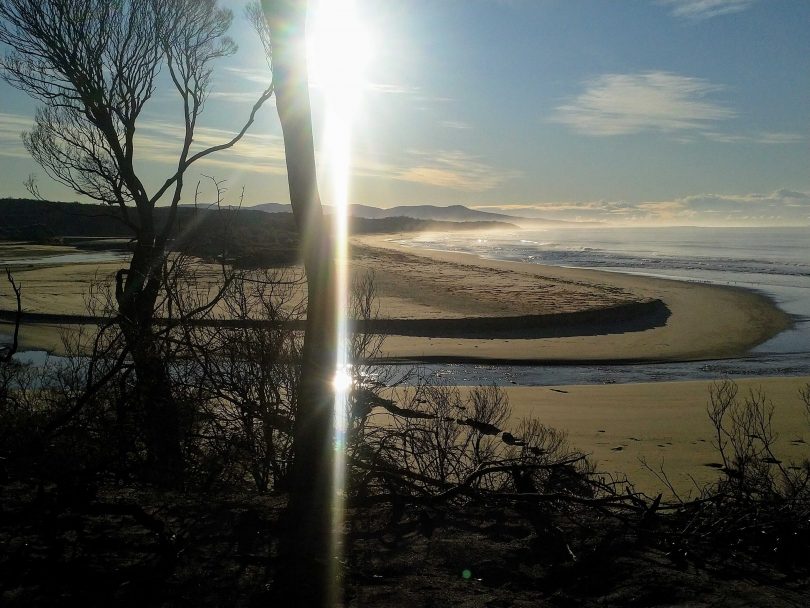 A burnt and isolated stretch of beach at the inlet of the Betka River, near Mallacoota. Photos: Michael Weaver.

The spinach, chives and parsley I’d planted before travelling to Victoria two weeks ago had thankfully borne a few edible shoots while away. Little did I know how handy they’d become.

What I thought were a few weeds turned out to be potatoes, albeit the size of my thumb, but hey, when you have to self-isolate and you live on your own, food is whatever you’ve got.

I crossed the border into Victoria on 29 June, a day before news broke of the first parts of suburban Melbourne going into lockdown.

My plan was to hug the coastal fringe between Mallacoota and Lakes Entrance, still almost 400 km away from Melbourne, but it was also the first day of Victoria’s school holidays and Melbournians would no doubt be travelling too.

It’s a beautiful stretch of coastline, still significantly scarred by the summer’s bushfires, and not surprisingly there are also still burnt leaves on the high tide mark of some isolated beaches. The towns and the landscape are starting to recover from the fires but have been dealt another blow by the wretched COVID-19 virus.

“We haven’t had a single case of it here,” said a caravan park owner at Lakes Entrance. “And we bloody well hope it stays that way.”

“We never want to see anything like that here ever again,” said a shopkeeper in Mallacoota. She was talking about the fires!

At Marlo, where the mighty Snowy River meets the Southern Ocean, the coastal reserve is untouched. Birdlife is abundant and ecosystems are flourishing. I couldn’t have been more isolated. 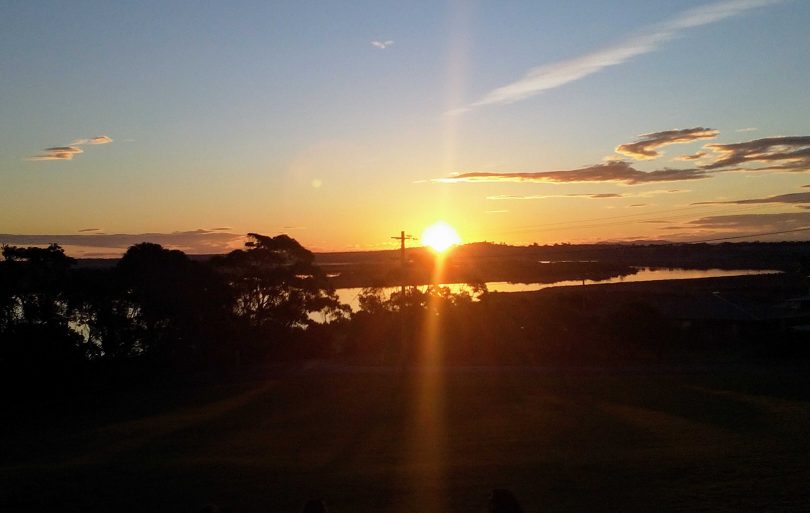 Sunset over the Snowy River at Marlo in eastern Victoria.

I crossed the border back into NSW on Sunday, 5 July, a bit over 48 hours before that very border was closed for the first time in more than a century. Back at work on Monday and more news of increased coronavirus cases has me a little nervous but not concerned.

Then the news started coming in: ‘if you’ve been to greater Melbourne, you have to self-isolate’.

Then: ‘if you’ve been to Victoria, you should self-isolate’. By this stage, it’s Wednesday, 8 July. This horse has already bolted.

Leaving work on Friday and with absolutely no symptoms, I booked a COVID-19 test just to be sure.

First thing Saturday morning I arrive at the COVID testing clinic at the side entrance of the Queanbeyan Hospital. There are four people in front of me. I sanitise my hands, put on a mask, take a seat. Another seven people arrive while I’m waiting.

A nurse comes out and checks to see the masks are sealed around our noses and chin. A couple of people have theirs on upside down. The nurses are amazing but you sense the concern on their faces behind the well-sealed masks, visors, gloves and other pieces of PPE.

I’m called in and questioned about why I’m here. I tell them I’ve been to Victoria (but nowhere near the hotspots) and have no symptoms.

“We’re going to test you today. You’ve done the right thing by coming in,” the nurse says.

I’m given some pamphlets and a medical certificate and told I have to self-isolate until the test result comes back. No going to the shops or leaving the house. I know the drill.

I proceed to the testing area and am met by a very cheery nurse who tells me this may be a bit uncomfortable.

“Now just tilt your head back slightly and I’m going to swab the back of your throat,” she says. It only takes a second or two but just long enough for the gag reflex to kick in.

Then comes the swab to the nose. It feels more like the cheery nurse has reached the inner sanctum of my brain. Then another swab to my other nasal cavity gets in good and proper.

My eyes are watering, my nasal cavity is sore, but as I refocus, I tell her I’m fine. I’ve done the right thing!

It’s now three days since the test as I write this from home, having done another damn Zoom meeting with my work colleagues this morning. I’m waiting for test results but feeling fine. Now, if someone could just drop off some bread and milk. Oh, and some eggs would be nice to go with that spinach.

Went through Cooma last week and thought I’d get a covid test, no way as the covid testing was closed an hour for lunch????

When should I get swabbed for coronavirus? Here’s the current criteria for testing