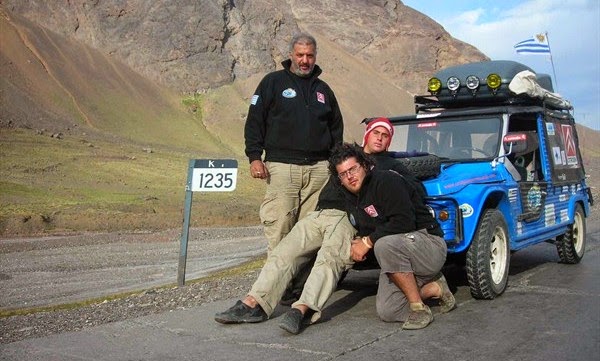 14 free films from 14 Embassies for the 14th edition of the Latin American Film Festival. In collaboration with ANU Film Group, the Embassies of Mexico, Paraguay, Peru, Uruguay, Venezuela, Argentina, Brazil, Colombia, Costa Rica, Cuba, Ecuador, El Salvador, Guatemala and Chile (in that order) will all be screening one film each between the 9th – 27th August.

Mexico: Guten Tag (Buen Día) Ramón (2013) is the story of a young Mexican boy, Ramón, who – following five failed attempts to cross the border illegally into the United States – decides to seek out his friend’s aunt living in Germany having learned of the charmed life she leads and greener pastures abroad. 7:30 pm, August 9.

Paraguay: La Redención (Redemption) (2018) centers on Don José Villalba, a veteran of the Chaco War (1932 – 1935) between Paraguay and Bolivia. Part road movie, part war drama, Don José is forced to unearth secrets of the past for Marlene – the granddaughter of one of his former comrades – as he struggles with his own mortality 56 years on from battle. 4 pm, August 11.

Peru: Una Sombra al Frente (Crossing A Shadow) (2007) is the dramatic tale of an ambitious and pioneering Peruvian engineer who strives to connect the Amazon with the rest of the country at the dawn of the 20th century. Peru’s Official Submission to the Best Foreign Language Film Category of the 80th Annual Academy Awards. 4 pm, August 12.

Uruguay: The documentary A 60km/h (60km/h) (2014) is an incredible true story of Uruguayan Mario Sabah who at 50 decides to fulfil a long-held dream. Quitting his job and restoring his Citroen Méhari – with a top speed of 60km/h – he sets off on a journey of discovery, living life to the fullest by quite literally driving around the world with his two sons in tow. 45 countries. Five Continents. 7:30 pm, August 13.

Argentina: Legal drama El Peso de la Ley (The Weight of the Law) (2017) sees Buenos Aires lawyer Gloria go up against the justice system to defend a man accused of rape in a small town where no one believes his story. For the first time in her career, her defendant may just be innocent. Winner of six 2018 Sur Awards. 7:30 pm, August 15.

Colombia: In Mamá (Mother) (2015), Victoria receives a visit from her estranged daughter Sara who asks her to take care of 7-year-old Nicole for a few days. As grandmother and granddaughter slowly connect, mother and daughter also begin to reconnect, mending old wounds and recouping lost time after years apart. 4 pm, August 19.

Costa Rica: Espejismo (Mirage) (2014) is a mind-bending journey through a painter’s subconscious as he attempts to take control of his life and overcome traumas of the past in this modern mystery/thriller. 7:30 pm, August 20.

Cuba: El Benny (The Benny) (2006) is a dramatic retelling of the many legendary twists and turns in the life of Cuban singer, bandleader and songwriter Benny Moré during the mid-twentieth century as he achieved success at home in Cuba, and abroad in Mexico and Venezuela. 7:30 pm, August 21.

El Salvador: The Claim (2016) is a look at the life, death and legacy of Salvadoran Archbishop Óscar Romero whose 1980 assassination whilst carrying out mass still remains unsolved to this day. 4 pm, August 25.

Guatemala: Based on a true story, Septiembre, Un Llanto en Silencio (September, A Silent Cry) (2017) contemplates the struggle of a man and his young daughter after she is left deaf following a bus attack during guerrilla violence in early 80s Guatemala. 4 pm, August 26.

Chile: La Vida de los Peces (The Life of Fish) (2010) focuses on Andre, a travel writer now based in Berlin, who has returned home to Santiago. As we spend real-time with him at a friend’s party, we learn about why he left in the first place, what he may have left behind, and the tragedy which binds the group. Winner of several awards including the Goya in Spain for Best Spanish Language Foreign Film in 2011. 7:30 pm August 27.

All films are free and have English subtitles. Screenings will be held in the Coombs Theatre of the ANU, on the corner of Garran and Fellows Roads.

Flavius Valerius Constantinus - 5 hours ago
Tracy Robinson Yes honey, in Greenway, Tuggeranong. Why? Do you want to come by for tea? Don't waste your time, I'm very well... View
News 57

Brent Hutch - 6 hours ago
Tramcar Trev if your only requirement is "safe and practical operation" then sure, you can pop up a sign. That argument can a... View
Tramcar Trev - 6 hours ago
Brent Hutch so that being the case how can bus stops be a simple sign on a post? Yet the tram needs $900k spent on each stop?... View
Ricky Newham - 6 hours ago
Andrew Dale ...haha...Mr Barr will just increase the rates for Mitchell landlords/businesses! View
News 83

John Taylor - 6 hours ago
James Ellis how about you provide something to refute it. View
Joshua Nash - 8 hours ago
Irrelevant in 2020 party View
Elroy Jones - 8 hours ago
John Garvey haha exactly! If it’s a good campaign you win! View
Lifestyle 10

Diane Kargas Bray - 8 hours ago
Great work Zango and the team Hands Across Canberra is proud to work with you and thank you for your generosity. View
show more show less
*Results are based on activity within last 7 days

Make no mistake, the ACT election result is a disaster for the Canberra Liberals, and one that has to be...

When I was at university, I worked casually at a pharmacy in an outer suburb of Canberra. The owner and...
News 83

You've seen them around town - Neuron's unmissable bright orange e-scooters - and now they are being joined by Beam's...
News 57

@The_RiotACT @The_RiotACT
Canberra's best young amateur photographers have been recognised in a competition focused on highlighting the ACT's natural environment https://t.co/KCpQnudARR (7 hours ago)

@The_RiotACT @The_RiotACT
The long-awaited Verity Lane Market, touted as an upmarket international food hall, is set to breathe new life into the city https://t.co/LjK3ZyWgUu (8 hours ago)

@The_RiotACT @The_RiotACT
Alistair Coe has accepted responsibility for the election loss which has exposed divisions between the Libs' moderate and conservative wings https://t.co/eTVmqKRPAB (10 hours ago)