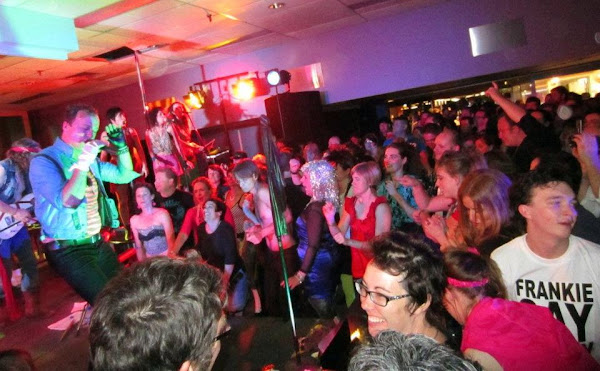 Sure, by the time that December the 22nd comes around the world will have already ended. But don’t let that get you down. Why not loose those apocalyptic blues by spending a night with Corey ?

Cell Block 69 ticket holders will amazingly get to see A. The end of the world on Dec 21st and B. Witness the 10 Corey’s of power perform their 12th Annual “Final Show Ever™” at the ANU Bar and Arena on Sat Dec 22nd !

An irrelevant pop magazine asked the currently very outspoken Corey Axelrod just how it would be possible for a Cell Block 69 ticket holder to witness his band, the most amazing band ever in the world’s history, on the day after the world ends. His response: “I dunno. Whoo Yeah ! Alright !”

You can purchase tickets through ticketek :
http://premier.ticketek.com.au/shows/Show.aspx?sh=CELLBLOC12#.UJMUjqPDlI0

or at the door on the night if not sold out.

Ticketek has closed for xmas:

This from the Cell Block 69 page:

Word has arrived from a few different sources about ticketek being closed surprisingly early and that online ticket sales are no longer available ie “No Longer on Sale”.

Just to clarify, tickets are still available at the door tomorrow night. They are not yet sold out. If you do plan on coming along and don’t yet have a ticket, it’s probably best to get there early – just in case.

Lastly, if you’ve purchased tix but haven’t yet collected them, your name has been forwarded to the venue and you can collect them at the door.

This news as you’ll no doubt agree, is totally awesome. Maybe not as awesome as Corey Elektra’s hair style or Corey Axelrod’s keytar, but it is still awesome.

Does this mean that Cell Block are saving the world? The sheer force of the Rock of the Corey’s resurrects the world from post-apocalyptic ashes on the wings of a rocking phoenix… we have so much to praise them for. It’s a shame this is their last ever tour again.
I’ve heard a rumour that the voice of Knight~Hammer – KDizzle KDowgg – will be joining them on stage for the secret climactic extravaganza which happens every year again – if it was possible, this thing just got even more amazing.

I for one, am looking forward to being part of the new version of the book of Genesis and the transparency with which we can write it this time, to save all the speculation and confusion arising from the last one. I think it will be called: The Book of Corey.

I should also add that people who have not been able to collect tickets from ticketek can do so at the door on the night. Tickets can be purchased online or in person thru ticketek until Friday afternoon at 4.30pm. After then, It can be done at the door.

Also, don’t forget about the Night Ride Buses ! Twice the fun knowing you don’t have to drive or fork out for a cab.

Kerryn Price - 2 hours ago
Never had a problem. View
Pari Gilmour - 3 hours ago
I think we are less cliquey but also less friendly. That is the beauty of a country town. Smiling and giving kindness, help a... View
Alison Brittliff - 4 hours ago
Yes and no, in a day to day bau I’d say yes, but when adversity or tragedy befalls one of our own we show our heart and com... View
Opinion 205

Graham Zalewska-moon - 2 hours ago
Jan 26 was selected as Australia Day (and is the date that the necessary legislation was passed by Parliament declaring that... View
News 8

Teena Brady - 3 hours ago
Does it matter. My ex got 4 weeks for 23 family violence breaches...... View
Don Rail - 5 hours ago
ACT????? View
Jason Ezra - 5 hours ago
Lobby your elected representatives to change the law to bring the requirements into line with every other jurisdiction. View
News 10

Antony Burnham - 4 hours ago
surely they are to be contrasted with passive transport trips, i.e. falling asleep on the bus and missing your stop View
Craig McPherson - 11 hours ago
Tristan Melhuish oh yes, and hey I get this language from government - bureaucracy at its finest - but from a journalist - su... View
Tristan Melhuish - 11 hours ago
Craig McPherson or signalising an intersection when they are installing traffic lights? 😂 View
Opinion 42

Greer Brennan - 7 hours ago
Ohhh some more food for thought View
Maria Greene - 9 hours ago
We went to one in Melbourne and the food was terrible and service weird. They may have difficulty getting staff during covid View
Carmel McDonell - 9 hours ago
Thai Herb -second that!!! View
show more show less
*Results are based on activity within last 7 days

I don't know about you, but I appreciate art because it's pretty. And because someone worked hard to make it...
Community 48

@The_RiotACT @The_RiotACT
January is wrapping up, but there’s still plenty to see and do in Canberra over the coming week https://t.co/yDyCfOctiv (6 hours ago)

@The_RiotACT @The_RiotACT
Geocon has given ground but the YMCA will still oppose a 14-storey development next door to its Gungahlin childcare centre https://t.co/AfdmfRnk2z (8 hours ago)