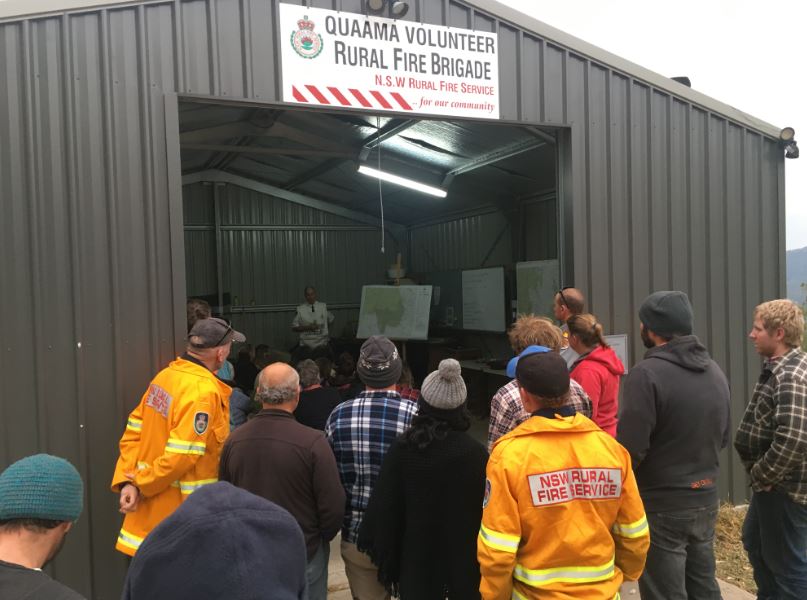 It’s a physical assault on this 12,000-hectare fire that will be assisted by water bombing helicopters, with a focus on strategic hotspots northwest of Bemboka township.

A community meeting in Upper Brogo on Sunday (August 26) evening also heard of possible backburning plans to “babysit” the fire this week.

The 70 people gathered were told that earlier backburning along the eastern edge of the fire up to Brogo Dam had been successfully completed, with Brogo River and Nelson Creek acting as a firebreak to the west, its unburnt country along these waterways that are earmarked for backburning in the last days of winter.

The community is being warned that if those operations do go ahead this week the Bega Valley and Monaro will be blanketed in smoke. Those plans are reviewed daily in light of weather conditions.

“Don’t be alarmed by the smoke and increase in fire activity if we do decide to go ahead with this backburning operation to contain the fire,” says Daniel Osborne from the Rural Fire Service.

“But be aware of what’s going on, don’t become complacent, check regularly with the current situation.” Firefighters from the RFS and NPWS swap notes ahead of a new week on the Yankees Gap Fire. Photo: Ian Campbell.

The fire is still listed as ‘Being Controlled’ and is not yet considered contained, however, there is a calm and ease in how those in charge talk about the week ahead and the weather forecast they’ll be working with.

The flames that claimed three homes on August 15 currently pose no direct threat to any properties.

“But this is not going to go away,” says RFS Superintendent John Cullen.

“We’ll be getting machinery into Upper Brogo, cleaning up tracks, getting them ready, cause you can never say never.”

Earlier plans to take the fire to 22,000 hectares and burn country west of the Brogo River seem to have been shelved for the time being. It’s geography that runs into the Kybeyan area of the Monaro and was burnt in 2013.

“We don’t want to add more fire to the landscape if we don’t have to,” says Damien Debruen from the National Parks and Wildlife Service. An investigation into the cause of the fire is underway, however, there is broad acceptance that its origin was a hazard reduction burn on private land along Yankees Gap Road at Bemboka.

Knowing that, those on plastic chairs or standing outside the Upper Brogo RFS shed on Sunday night were surprised to hear the RFS talk of people still burning off.

“We are going through a very dry period, please do not burn,” Mr Cullen says.

“Crews are working night and day on this fire and doing a fantastic job, we don’t want to be pulling them off to fight new fires.”

One resident of Hore Lacey Road asked, “Why do all the fire danger signs along the coast still read Low to Moderate? Wouldn’t it be a good idea to change those signs?”

Fire signs are more an indication of weather conditions the meeting was told.

“Regardless of whether its the Bushfire Danger Period from the first of September or whether it’s now, the onus is wholly and solely on the landowner who lights the fire to make sure it remains contained on their property,” Mr Osborne says.

Those gathered were told that while fire permits can be cancelled during the fire season, right now, one week out the RFS could only advise people not to burn.

People are required to notify the RFS and their neighbours ahead of any burn, but as Mr Osbourne says, “It’s the people that aren’t ringing us that are the issue.”

“There are significant penalties that can be applied.” Malcolm Turnbull was Prime Minister when this fire started, those at Sunday’s meeting chuckled at the thought that his replacement might also be gone by the time these flames are extinguished.

Good rain is what’s needed. In the meantime, the community has been told to stay alert, keep preparing, and stick together.

For updated news and advice on how to prepare your property, check the NSW RFS website.

Rosemary Braiuka - 2 hours ago
You DO realise you are misinformed don’t you? View
Kir Rin - 6 hours ago
Not to mention the impact each 1 degree will have on ocean levels. View
Denise Bourke - 14 hours ago
I was disappointed U didn't get my Lego joke ... There's more people who share your view .... But í know the frustration. View
News 7

Luke Malacchi - 2 hours ago
Bill Caddey....prime for a bloke with a railbike View
Sport 7

Taryn Cameron-Smith - 4 hours ago
Karolyn Odlum Jennifer Cameron we had better go back soon to check it all out!!! View
Karen Castro - 6 hours ago
I thought you and Anna would love this Emma Toal 🙂 View
Community 12

Peter Bee - 5 hours ago
Zed and friends have put his party into a position of not being electable. A move to the centre needed. View
News 23

Bob Jones - 6 hours ago
Ross Bryant just because you wouldn't use one doesn't mean no one else would. But typical Boomer attitude. View
Property 7

David Reid - 17 hours ago
Do the words frying pan and fire come to mind. View
show more show less
*Results are based on activity within last 7 days

Civic will see new life breathed into it with the opening this Thursday (22 October) of the long-awaited Verity Lane....
Opinion 47

A few years ago, a couple in my social circle split up. They had been together for years, becoming a...
ACT Election 62

Prominent Liberal insiders have taken a swing at leader Alistair Coe and the party's conservative wing, saying that the party...
News 23

@The_RiotACT @The_RiotACT
It was an election of a different kind that saw candidates caught between a rock and a hard place to choose the ACT's fossil emblem. Who won? https://t.co/s5eflMMkp5 (2 hours ago)