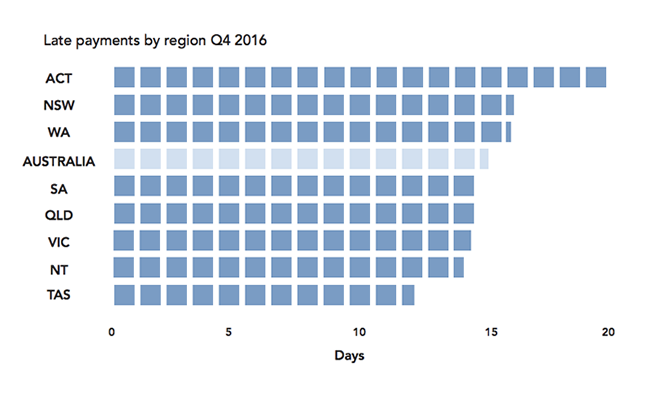 Canberra businesses are the worst in Australia at paying down their debts, averaging 19 days over payment due date, six days later on average than the rest of the country.

New research by ratings giant Dun & Bradstreet has found that businesses in all states are slow at paying their debts, but businesses in the ACT are by far the slowest.

“The ACT experienced the sharpest deterioration in late payments, linked to the persistently slow rate of payments from government entities,” the report said.

“During the past five years, Tasmanian business has gone from making the slowest late payments to top of the class. ACT companies have distinguished themselves as being consistently tardy over the same period.”

As well as by region, payment speed was linked to business size and sector. Agriculture companies were far and away the speediest, with payments typically falling no more than a fortnight late. ACT retailers by contrast were the slowest, falling more than three weeks late.

In a curious twist, the report also found that it was big business in the slow lane, with bigger and more powerful companies taking longer to repay than small companies. Explaining why, D&B CEO Simon Bligh suggested big businesses could flex their muscles in a way that smaller companies could not.

“Large businesses are usually paying bills further outside their terms and getting good at squeezing small businesses to pay who aren’t powerful enough to chase their customers or change the terms,” he said.

Benkin Manfish - 1 hour ago
That might even work, if there was any evidence that they could do an even half way decent job.... View
Lyn Kemp - 8 hours ago
ACT Liberals - the same as the federal LNP - no policies, no idea!! ABSOLUTELY NO WAY!!!... View
Megan Baker-Goldsmith - 13 hours ago
Wayne Lutter lol had to go back 40+ years to find a now deceased labor politician to try and blame. Cool story bro.... View
News 78

astro2 - 8 hours ago
Yes, I read what you wrote. The mention of Hobart and Darwin is because, as far as I know, these two capital cities are the o... View
Sharvi Tinnlonga - 10 hours ago
once it gets to the airport, qbyn people will agitate for it to connect Queanbeyan with the airport and canberra. View
Joe Dolezal - 12 hours ago
I like the tram and am excited for it to cover more of Canberra. View
News 14

Jeff Smith - 16 hours ago
Nailed it! If the ACT Government employed active and skilled inspectors to properly audit buildings during construction we wo... View
Rohan Peek - 16 hours ago
If they were built properly in the first place the strays and body corps wouldn’t have half as many issues View
Jean Hardy - 19 hours ago
Vicky, are you formally exx manger from pacific place appartments View
Opinion 1

grim123 - 16 hours ago
In plenty of cases, children should be removed from abusive or dangerous environments much more quickly. Working on keeping c... View
Motoring 14

As the ACT Government prepares for Stage 2 of light rail, fasten your seatbelts because it promises to be a...
News 52