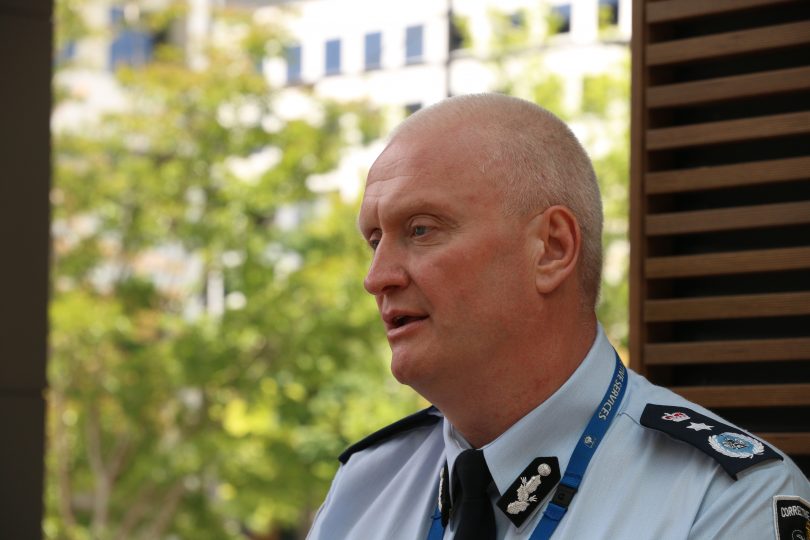 ACT Corrective Services Commissioner Jon Peach has been moved on from his position. Photo: Dominic Giannini.

ACT Corrective Services Commissioner Jon Peach has been suddenly dumped from the position and will step into a newly created ‘at-level’ role of executive group manager of security and emergency management within the Justice and Community Safety (JACS) Directorate.

An ACT Government spokesperson said the move is in response “to the growing security and emergency management national agenda” but did not answer questions about whether any complaints had been made against the commissioner prior to his reassignment.

When asked if the move meant the government had lost faith in Mr Peach to reform the ACT’s prison system, the spokesperson said, “Mr Peach has a strong background in safety and security from his time the UK Armed Forces and as Director for Security Services in the Department of Corrective Services in Western Australia.”

“The employment arrangements for the Senior Executive Service provide for members to be transferred to other roles across the entire ACT Public Service should their expertise be needed in a particular area.”

Concerns have been raised by guards within the ACT prison system over Mr Peach’s tenure as commissioner. Many have expressed anger about how the Alexander Maconochie Centre (AMC) prison is being run.

A reduction in prisoner discipline was attributed as the catalyst for the prison fire in November 2020, as well as violence against officers, including one incident three weeks ago where a guard was punched repeatedly and kicked in the groin, according to one guard.

Mr Johnson’s role as ESA Deputy Commissioner will also be backfilled during this time.

ACT Minister for Corrections Mick Gentleman said reform and improvements would remain at the top of the agenda for corrections in the ACT.

But one parent of a detainee has questioned the appropriateness of Mr Johnson taking over as interim ACT Corrective Services Commissioner, querying why the position is consistently filled by ex-law enforcement.

“Where are all the people who understand criminology, rehabilitation and reintegration?” said the parent.

The move was announced on the same day that a lawyer for an Indigenous woman, who alleged she was forcibly strip-searched in front of five male detainees at AMC, told the Magistrates Court a civil claim is being made against the jail.

The shift also comes less than a fortnight after Minister Gentleman announced that former Victoria Police Chief Commissioner Christine Nixon will be heading the prison’s Oversight Committee, which will address shortcomings at AMC and ACT Corrective Services’ Court Transport Unit.

The committee will oversee the implementation of recommendations for a variety of reports into the prison.

Is he is the first victim of Christine Nixon’s Oversight Committee?

His new job appears to have been created especially for him – a very expensive “safety net”.